All For A LARP — QAnon Gets Its Primetime Debut

In the early ’90s, I believed I knew the secret to free candy. And that secret was Tootsie Pop wrappers that included an image of a Native American man aiming an arrow at a star. Other kids my age may or may to not have known, but my friends and I were certain that the star wrappers were significant and rare. Specifically, star wrappers were significant because each one could be swapped for a free Tootsie Pops, so I thought. And they were rare because, well, they’re free candy tickets. So why wouldn’t they be rare?

I bought into the idea unquestioningly, despite never trading a star-printed wrapper for more candy myself. I never even witnessed anyone do it. But I knew that those wrappers were candy currency.

It was just intuitively obvious. The other images on the wrapper showed kids playing sports. The image of the man wearing a full feather headdress aiming at a star didn’t match the others. It sticks out. It must have a special meaning. 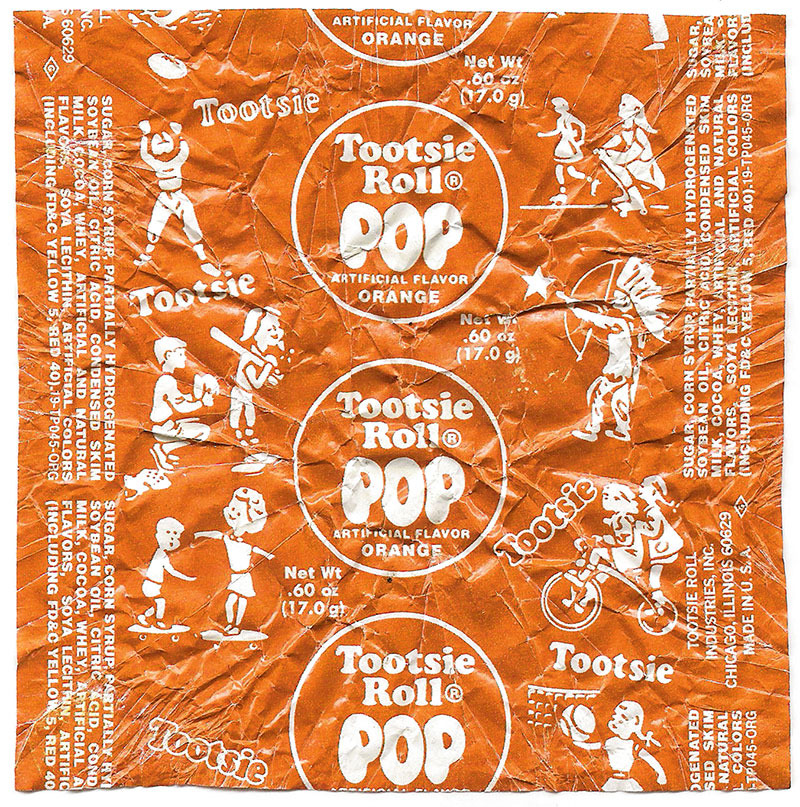 Of course, just because something seems true and is universally believed, that doesn’t make it true. Even if you’d like to believe you know the secret to getting free candy.

In truth, Tootsie Pop wrappers with stars were never rare. The star image appears just as frequently as every other image on the wrappers. Star wrappers also aren’t significant and weren’t free candy tickets. While it’s possible some independent retailers gave out suckers in exchange for the star wrappers, it was never widespread practice, and was never sanctioned by the confection’s manufacturer. The fine people of Tootsie Roll Industries Inc. aren’t running a charity.

But despite having no basis in reality, generations of American children were suckered by the myth. Tootsie Roll Inc. says they began receiving letters from free candy seekers in the 1930s. By one point, they were receiving 150 letters a week. In 1982, Tootsie Pop began responding to these requests with a letter of their own called “The Legend of the Indian Star.” It tells a fantastical creation myth about Tootsie Pops.

The top left-hand corner of the letter to disappointed children is a bright red stamp that says “Top Secret.” Perhaps that’s supposed to help the reader feel that, even though they didn’t really know the secret to free candy, they still are privy to some kind of concealed, inside information. 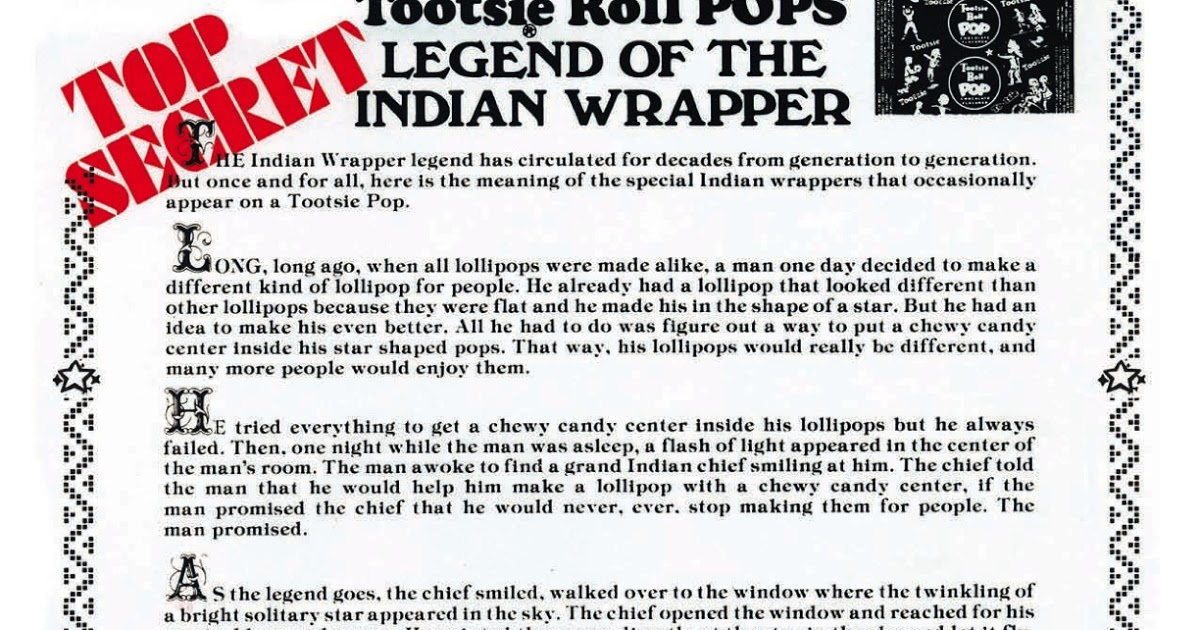 Kids just naturally want to believe they hold rare secrets and tend to assign special significance to insignificant things. As we mature, most of us learn how to temper these tendencies.

The rest of us are prime candidates to spend Saturday evenings with fellow QAnon followers trying to find the special meaning behind a typo in a Trump tweet. And be featured at least once in All For A LARP.

Here’s what the QAnon crew was up to for the week of February 17.

It’s not uncommon for people to feel, in their more insecure moments, like they’re a fraud about to found out. It’s also natural to compensate for these feelings by trying to convince anyone who will listen that you’re the real deal. Q, by virtue of actually being an imposter, undoubtedly struggles with these issues more than most.

Q must’ve felt the sting of imposter syndrome particularly strongly this week, because Q spent some time trying to convince anyone who would listen that the anonymous 8chan poster truly is close to President Trump, and not merely a group of scammers exploiting angry people who otherwise feel powerless.

Q and people in the QAnon community attempt to establish Q’s legitimacy with “Q proofs.” In Q world, a Q proof is typically evidence that Q has access to information only someone close the president would have. In the real world, Q proofs are a product of QAnon believers tendency to connect unconnected things and find significance where there is none. 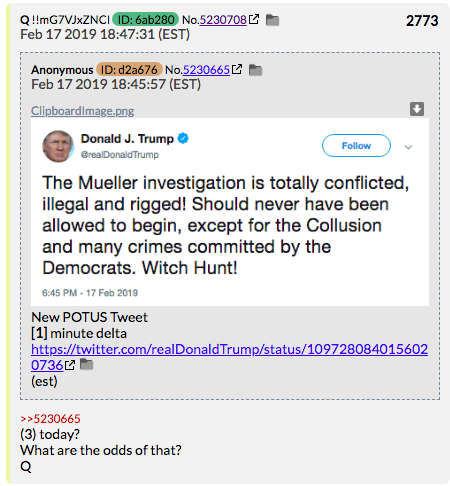 To help spread the gospel of Q, Q requested a graphic of this “Q proof.”

An 8chan anon obliged with this creation. 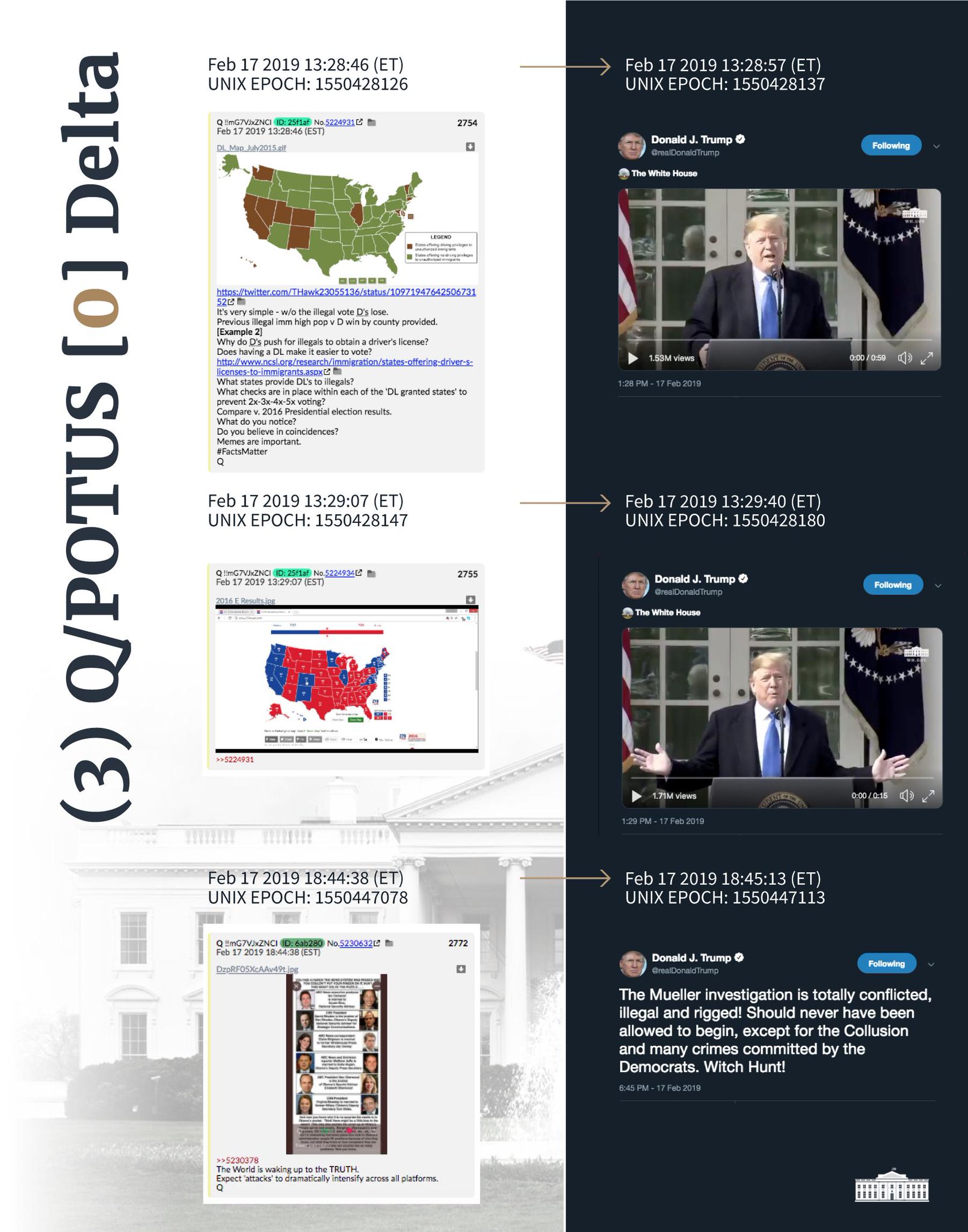 People in the QAnon community found this convincing.

Mathematically impossible to be coincidence or hoax.

Trump IS part of the Q intel operation. #qanon https://t.co/rpAtCuB4TG

In reality, these “[0] Delta” posts are as significant as Tootsie Pop wrappers with stars on them. To demonstrate as much, I effectively duplicated the feat of post timing by tweeting in the minute before a Q drop three times on February 20.

Twice today, I tweeted just moments before a Q drop.

Do you believe in coincidences? How many coincidences until it’s mathematically impossible?
T pic.twitter.com/MkDD7e3YiZ

Still, the skeptics doubt that I am Q. Well fine, here’s one last View proof for those who are willing to awaken to THE TRUTH.

Three times in one day, I tweeted a single minute behind a Q drop. This can’t be a dumb coincidence!

Me being the originator of the conspiracy theory I write about would be a satisfying twist to the QAnon saga. But alas, it is not true. I tweeted immediately behind a Q drop three times in a single day for one reason: dumb luck. I didn’t do it on purpose, and it doesn’t prove anything. It’s just a coincidence. Coincidences happen all the time.

But if I was a deeply unethical person, I might point to these coincidences and confidently assert that the so-called “coincidences” were deliberate. I might exploit the human tendency to falsely believe that products of random chance or natural law were the result of deliberate agency. I might conceal the fact that it’s likely that any two high-activity accounts will occasionally post at the same time.

But what kind of monster would do such a thing?

“Q proofs,” and cold reading generally, exploits people’s poor intuitive grasp of probability and other human cognitive quirks. As the so-called “birthday problem” shows, people tend to underestimate the probability of events. Contrary to intuition, there is a greater than even chance that two people in a group of 23 random people share the same birthday.

Half-understood portrayals of subcultures are often used as the backdrop of episodes of procedural shows. For example, the CBS series CSI:NY once dedicated a two-episode story to people who play the online role-playing game Second Life. So it was inevitable that QAnon would be explicitly mentioned in one of these long-running crime drama.

On Tuesday evening’s episode of NCIS: New Orleans, QAnon didn’t get the two-episode treatment, or even the one episode treatment. But QAnon was mentioned briefly in one scene.

In a short scene an exasperated QAnon skeptic argues with with a guy who’s semi-redpilled on QAnon. This argument then irritates a normie.

I feel so SEEN. pic.twitter.com/h2zSq99hv9

Despite the fact that QAnon’s screentime is limited to a few lines, and the characters were portrayed as obnoxious nerds for even discussing the conspiracy theory, many in the QAnon community felt validated.

Q, who relishes QAnon’s media hits, mentioned the clip in a Q drop. 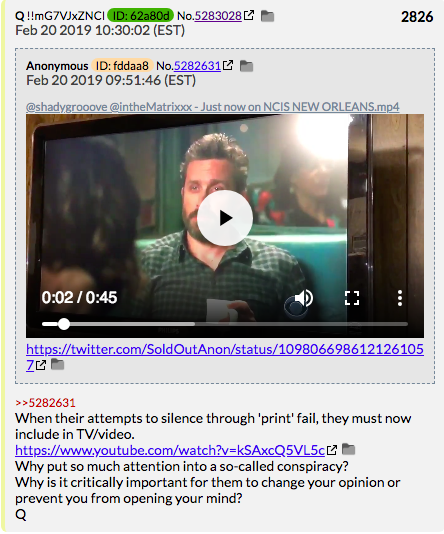 Q asks “why put so much attention into a so-called conspiracy?” This is the standard-issue “All for a LARP?” response. It’s a bit odd that Q defines four or five lines as “so much” attention. Especially the episode itself was called “Conspiracy Theories,” and QAnon barely got a mention.

People in the QAnon community always get overexcited when the conspiracy theory gets the teensiest bit of mainstream media attention. They sometimes remind me of Mike Wazoski from the Pixar film Monster’s Inc., who felt validated by technically “being on the cover of a magazine,” even though his face is obscured. 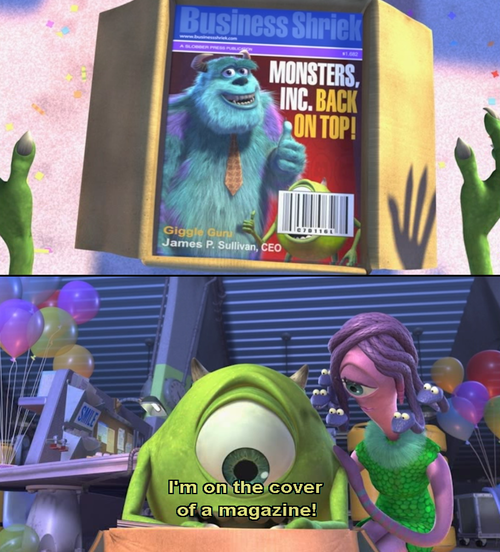 QAnon appears to enjoy some support from at least one Trump employee. As noticed by journalist Zach Everson, Mar-a-Lago pastry chef Elizabeth Alfieri’s public Instagram account included dozens of posts that promoted QAnon-related hashtags. Many of these posts include photos or herself or her creations while she is at work in the Florida resort.

Some other photos a Mar-a-Lago pasty chef posted on Instagram with the #Q #QAnon
and #WWG1WGA tags. Oh, and #MAGA too.

(A reminder that @realDonaldTrump is walled off from his businesses.)

Will Sommer published an article about the QAnon-promoting Mar-a-Lago chef for The Daily Beast. This article drew accusations from some conservatives that it wasn’t newsworthy and that it unfairly singled out a Trump employee for having kooky beliefs. As if believing that most of the government is infested with traitorous pedophile child eaters who deserve execution, and promoting a baseless conspiracy theory that has already led to terrorism charges for one believer, is akin to believing Atlantis is real.

Some even falsely claimed that Sommer “doxxed” her, when in reality the article’s information about Alfieri was all publicly shared on social media by Alfieri herself.

When one of the president’s employees is leaving clues to a violent conspiracy theory around one of his properties, it’s news.

On the afternoon of February 21 redditor gorillaviking on the subreddit r/conspiracy made this unusually precise prediction.

This was remarkable because unlike Q’s typical Nostradamus-style cryptic Q drops, this was a real prediction. It’s a prediction with a narrow timeframe (tonight or tomorrow), a specific person (Bob Kraft), a specific event (tied to human trafficking), and a particular location (Florida). The next day news broke that Robert Kraft is facing charges of soliciting prostitution. The individual who made that post did, in fact, have some inside information and was able to easily demonstrate that fact.

Q actually attempted to show that they did predict the Kraft arrest, by pointing to an earlier Q drop that said: “Will make the Super Bowl look like a puppy show.” 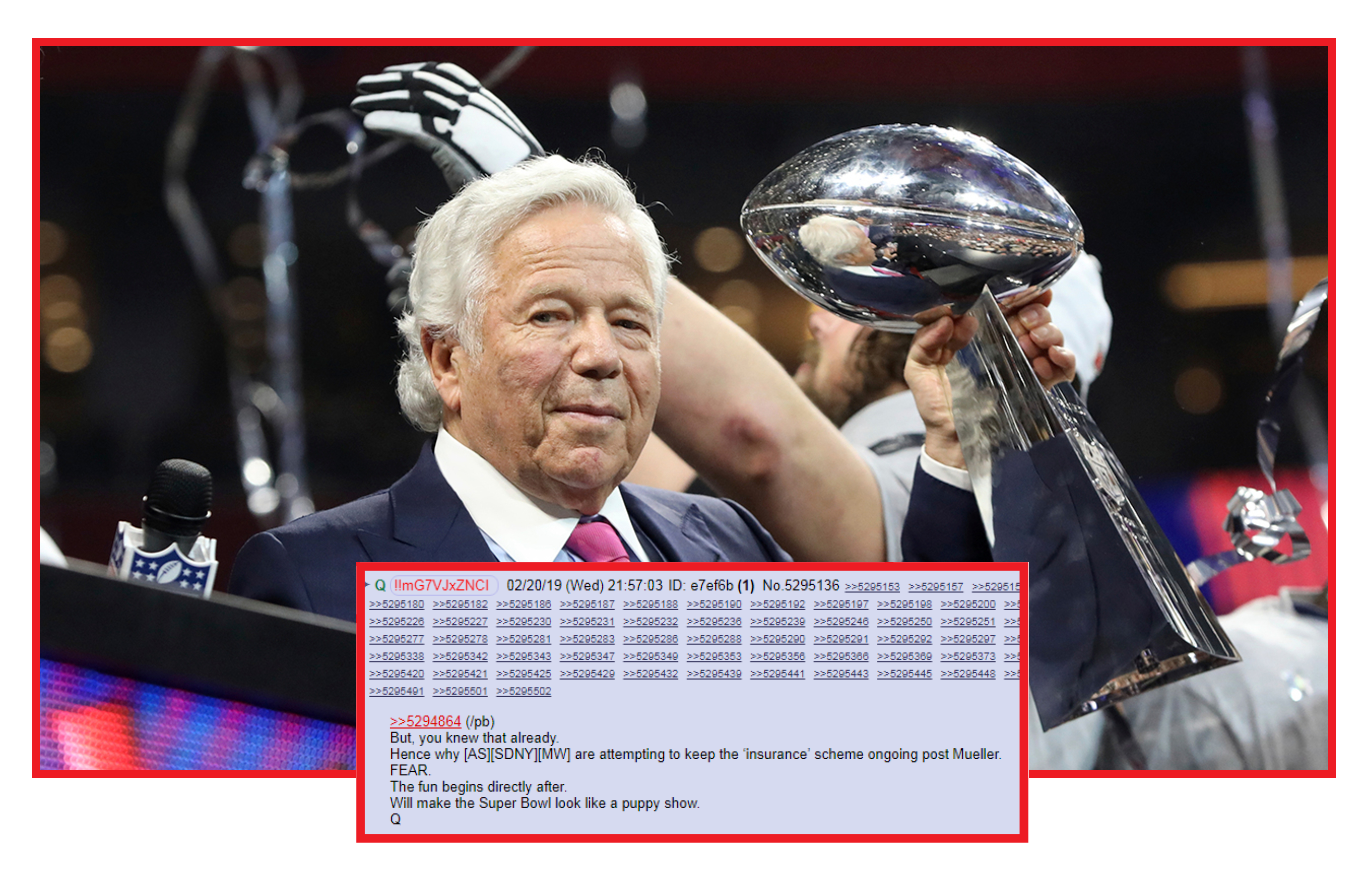 But a single, vague, “Super Bowl” reference is just more Nostradamus-like cryptic posting that is retconned as a prediction after the fact. It’s nothing like the clear prediction made by gorillaviking.

This was the only post by “gorillaviking” so it’s unlikely a Q-like movement will form around the redditor. But it was a tidy demonstration that it is fairly simple for an anonymous online account to conclusively show that they have inside information about high-level arrests related to human trafficking.

Q just isn’t capable of doing it. And that’s why QAnon followers are forced to settle for star wrappers.