The morning after the New York Times reported that Supreme Court Justice Brett Kavanaugh allegedly “pushed his penis into the hand of a female student” at a drunken dorm party while a student at Yale, President Donald Trump took to Twitter to defend his most recent Supreme Court pick.

“Brett Kavanaugh should start suing people for liable, or the Justice Department should come to his rescue,” he tweeted. “The lies being told about him are unbelievable. False Accusations without recrimination. When does it stop? They are trying to influence his opinions. Can’t let that happen!”

Obviously, the president meant “libel” rather than “liable” while calling for Kavanaugh to start tossing out lawsuits over a deeply reported story and suggesting the Department of Justice should “come to his rescue.” (he would eventually delete the tweet and post an updated one.) 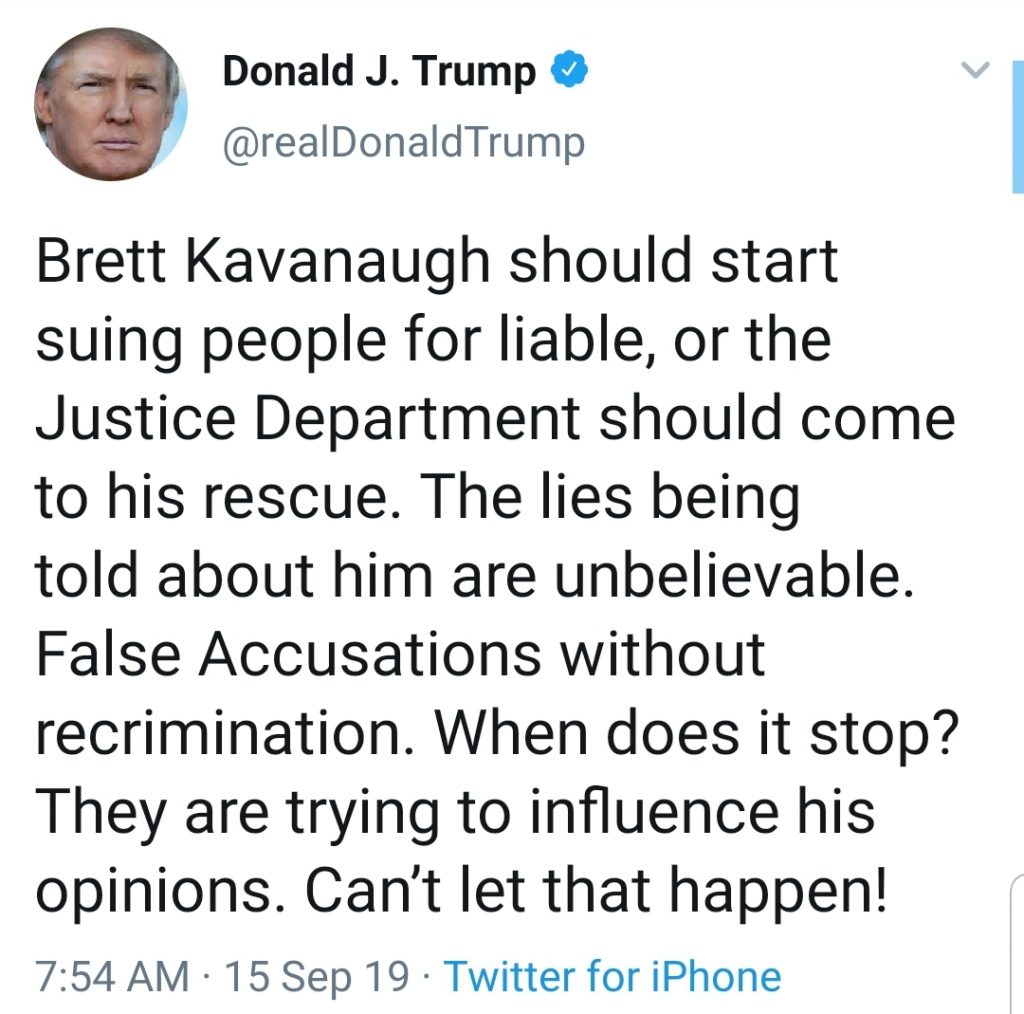 This tweet came minutes after the president groused that the “Radical Left Democrats and their Partner, the LameStream Media, are after Brett Kavanaugh again, talking loudly of their favorite word, impeachment.”

Now the Radical Left Democrats and their Partner, the LameStream Media, are after Brett Kavanaugh again, talking loudly of their favorite word, impeachment. He is an innocent man who has been treated HORRIBLY. Such lies about him. They want to scare him into turning Liberal!

“He is an innocent man who has been treated HORRIBLY. Such lies about him,” Trump added. “They want to scare him into turning Liberal!”

The New York Times report, which is part of an upcoming book on the allegations of Kavanaugh’s sexual misconduct as a student, also found at least seven people who heard about an incident Deborah Ramirez first recounted last year during Kavanaugh’s confirmation. Ramirez claims that Kavanaugh, then a freshman, “pulled down his pants and thrust his penis at her” while other partygoers laughed.

The Times has now found that Kavanaugh was allegedly involved in another similar event at a different dorm party that echoes Ramirez’s accusations.