The Year In Q: 2018 Was Hilariously Frustrating For QAnon Followers

The mysterious 8chan poster known as “Q” promised on multiple occasions that “2018 will be GLORIOUS.” For people who genuinely believe that Q is a government insider close to President Trump, that “glory” was supposed to come in the form of mass arrests of some equally dramatic event that would expose the so-called “deep state.” But even as QAnon community broke into mainstream awareness, vindication remained elusive.

Here are the events that defined the absurd QAnon conspiracy theory in 2018.

QAnon received a huge boost in January thanks to a full-throated endorsement from Jerome Corsi, who is best known for being the conspiracy theorist who aggressively promoted birtherism.

Corsi made his endorsement known while appearing on The Hangman Report. “The Storm is upon us,” Corsi said. “2018 will be the year of the counterattack that Donald Trump is going to wage against the deep state. This is going to be a battle of enormous proportions which will determine whether or not the American republic as a constitutional republic sustains or does not.”

Corsi even made efforts to “decode” Q’s cryptic messages.

But alas, the alliance between Corsi and Q couldn’t last forever. In an April 29 Q drop, Q warned, “Be careful who you are following. Some are profiting off this movement.” Many interpreted that to be a dig against Corsi and Infowars.

This rift eventually led to Corsi denouncing Q and declaring that Q had been “completely compromised.”

In February, the QAnon community was very excited about the Nunes Memo, which alleged abuse by the FBI and FISA courts. Some Q followers believed that it would expose the deep state and vindicate the conspiracy theory. It did not.

QAnon received its first significant celebrity endorsement thanks to comedian Roseanne Barr, who was staging a comeback earlier this year. On March 31, Roseanne tweeted, “President Trump has freed so many children held in bondage to pimps all over this world. Hundreds each month. He has broken up trafficking rings in high places everywhere. notice that. I disagree on some things, but give him benefit of doubt-4 now.” She later deleted the tweet.

However, Roseanne’s star power was significantly dimmed after compared Valarie Jarrett to an ape on Twitter. The fallout led to the cancellation of her eponymous ABC sitcom.

In June, people in the QAnon community got very excited about a report from the Department of Justice Inspector General entitled “A Review of Various Actions by the Federal Bureau of Investigation and Department of Justice in Advance of the 2016 Election.” Some believed it would expose the deep state and vindicate the conspiracy theory. It did not.

QAnon Believer Arrested After Standoff At The Hoover Dam

On June 15, a 30-year-old Nevada man was arrested following a 90-minute standoff at the Hoover Dam, according to the Las Vegas Review-Journal. Police say that Matthew P. Wright drove a homemade armored vehicle onto the Mike O’Callaghan-Pat Tillman Bridge and stopped, blocking traffic. During the standoff, Wright held up a sign reading “Release the OIG report.” The sign may have reflected a belief, held by some people in the QAnon community, that the DOJ Office of the Inspector General report was incomplete, and a second report was yet be released.

While facing terrorism charges, Wright sent letters to President Donald Trump and other elected officials. According to the Review-Journal, these letters included the signoff, “Where we go one, we go all,” which is the QAnon rallying cry.

QAnon Enters The Mainstream At The Tampa, Florida Trump Rally

QAnon’s big breakout moment occurred on July 31st. On that day, Trump was in Tampa to rally for then-Congressman Ron DeSantis, who subsequently won his gubernatorial election and is currently Governor-elect of Florida.

Everyone who watched the rally noticed the QAnon gear because it was unmissable. Q shirts were seen everywhere; people held signs cut in the shape of Q; some held signs that read “We are Q.”

People lining up for the Trump rally in Tampa today. A lot of the chan anons might treat Q-Anon like a LARP, but by all appearances there are plenty of people who take it seriously irl. pic.twitter.com/uys7kmnAs1

This led to a flurry of explainers from major news outlets.

This included a USA Today article with the headline, “QAnon at Trump Florida rally: What the Q signs mean.” The Washington Post, however, was blunter: “‘We are Q’: A deranged conspiracy cult leaps from the Internet to the crowd at Trump’s ‘MAGA’ tour”

Q, of course, loved all this attention. In an August 2 Q drop, Q said this:

The QAnon conspiracy theory posits that “Q” is somebody or a group of people close to president Trump who are battling the deep state and an evil global cabal. But in August, Q was interested in a seemingly less serious enemy: a parody account on Twitter.

On August 12, Q linked to the Twitter parody account “S8N.” Q later falsely said that the s8n account “HOLDS many ‘questionable’ message from people of power/influence” and is “run by BIG NAMES.” This lead to a harassment campaign against the s8n account and its owner, a 20-something UK man.

In a late night shitpost, Q links to the @s8n parody Twitter account.
The tweet says, “Someone sacrifice a pizza or something I’m getting bored of goats.”

NBC News Reports On The Rise Of QAnon

On August 14, NBC News published a report about the early promoters of QAnon. Reporters Ben Collins and Brandy Zadrozny traced the rise of the QAnon to three people: Coleman Rogers (aka Pamphlet Anon), Tracy Diaz (aka Tracybeanz), and Paul Furber (aka BaruchtheScribe). 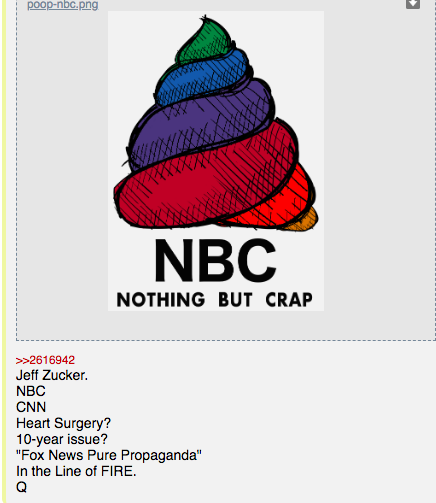 William Gregory Douglas, 35, allegedly posted a series of tweets threatening to shoot YouTube employees in response to restrictions being placed on his YouTube channel, according to the FBI criminal complaint filed in this case. He was arrested on September 20, 2018 without incident. The indictment states that these tweets included language such as, “I would kill the 100 YouTube employees,” “you want a bigger mass casualty aka shooting let’s see what I can do,” and “return my channel you low life Sholes before someone else comes and shoots more of your employees.”

People in the QAnon community dubbed October to be “Red October.” Some imagined that during the run-up to the November elections, the long-promised “mass arrests” would begin.

@cspanwj #QAnon #MockingbirdMedia
Q says a Red [October] wave coming. I suspect that will be due partly to arrests between now and November. https://t.co/aO4r7HeLym

The high-level arrests that the QAnon community was hoping for didn’t happen.

The Red Tsunami Fails To Come To Pass

Based on previous Q drops, people in the QAnon community hoped that the midterm elections would lead to a “Red Tsunami,” or massive gains for Republicans in Congress. While Republicans gained two Senate seats, Democrats won 40 seats in the House of Representatives. Some QAnon believers, upon realizing that the Democrats would regain control of the House, felt misled and aggrieved. 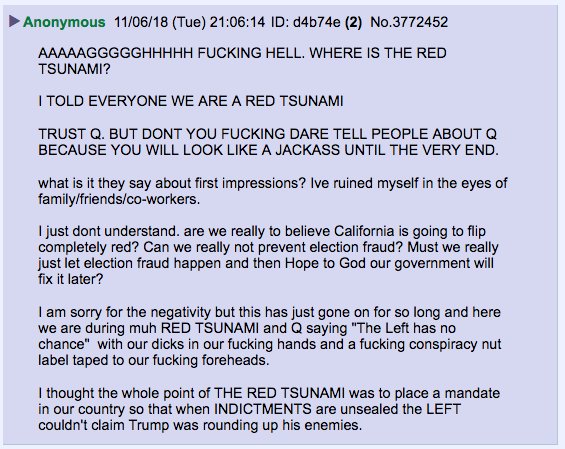 The QAnon community had a lot invested in the date 11/11/18, since many thought Q promised “a parade that will never be forgotten.” The belief that something big would happen on that day was bolstered by Trump’s reported desire to hold a military parade on that day. The military parade that Trump wanted for that date was canceled, and the day passed by without major incident.

QAnon believers became fixated on the phrase “11-11-18” in March, after the mysterious Q wrote a post describing it as a “parade that will never be forgotten.” pic.twitter.com/HgW1UoIdYF

On November 30, the Vice President Pence’s official Twitter account tweeted an image of Pence with a Florida SWAT officer wearing a QAnon patch. The patch in the tweet was first spotted by Right Wing Watch reporter Jared Holt. The tweet was quickly deleted.

The Vice President tweeted an image of a man wearing QAnon merch.

Not from Pence’s personal account, mind you. From the official office account @VP, ensuring this image will be preserved in government archives.

This comes a few days after @realDonaldTrump RTed a QAnon account. pic.twitter.com/ifIreIHZ15

As a consequence the officer wearing the patch, Broward County Sheriff’s Department Sgt. Matt Patten, received a written reprimand and was removed from the SWAT team.

The QAnon community had high expectations for December 5, or “D5.” On that day U.S. Attorney John Huber was scheduled to testify in a hearing about the Clinton Foundation to the House Oversight Committee.

The next highly anticipated date in the QAnon community is December 5.

On December 5, the House GOP will hear testimony from U.S. Attorney John Huber. Huber, at Sessions’ 2017 request, has been looking into whether further investigation is warranted in the “Uranium One” deal. pic.twitter.com/30xgiUdSeU

The hearing was delayed until December 13. While a seat was reserved for John Huber at the hearing, he did not appear.

The hearing itself was disappointing for the QAnon community, and everyone else who hoped it would reveal something significant. During the hearing, Republican lawmakers clashed with their own witnesses because they refused to provide documents to the committee that could back up allegations of wrongdoing on behalf on the Clinton Foundation.

“To quote Q, number 2436,” Patterson said. “For far too long, we have been silent and allowed our bands of strength that we once formed to defend freedom and liberty to deteriorate. We became divided. We became weak. We elected traitors to govern us.”

Patterson ended the reading QAnon motto: “Where we go one, we go all. Q.”

What will 2019 bring for QAnon? The QAnon community, as always, hopes for mass arrests and military tribunals of people in the so-called “deep state” and “cabal.” But if the past year is any guide, they’ll probably just be stuck in an endless cycle of high hopes followed by frustrating disappointment.