What Happens When QAnon Accuses A Parody Twitter Account Of Being Run By Child Sacrificing Satan Worshipers?

On August 12th, the owner of the popular “s8n” Twitter parody account reached out to me for help. Normally, his mentions on Twitter were responses from his fans to the jokes he posts almost every day.

Hell is just a replay of your life, except everything’s on fire.

But that afternoon, he noticed his mentions included hundreds of wild accusations about vile crimes and occultism. They asserted he was a pedophile and/or devil worshipper.

Many said that they were sent by “Q.” 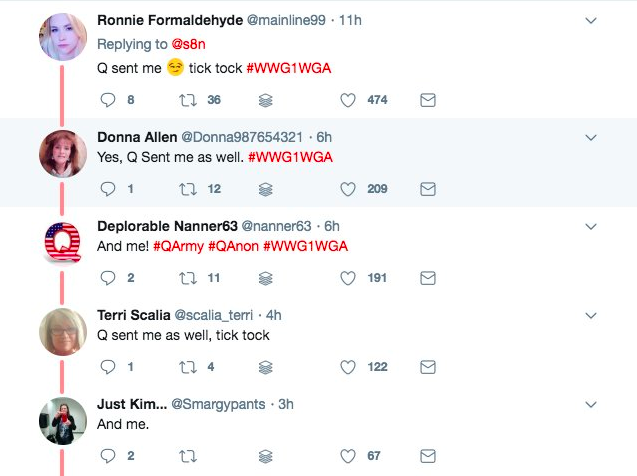 He wanted to know why this was happening.

While I was at my San Diego home preparing to catch up on some work for my day job, s8n unexpectedly direct messaged me, asking “Who is Q and why are they attacking me?”

I asked him if he was at all familiar with the QAnon conspiracy theory. He was not. So I explained it to him. 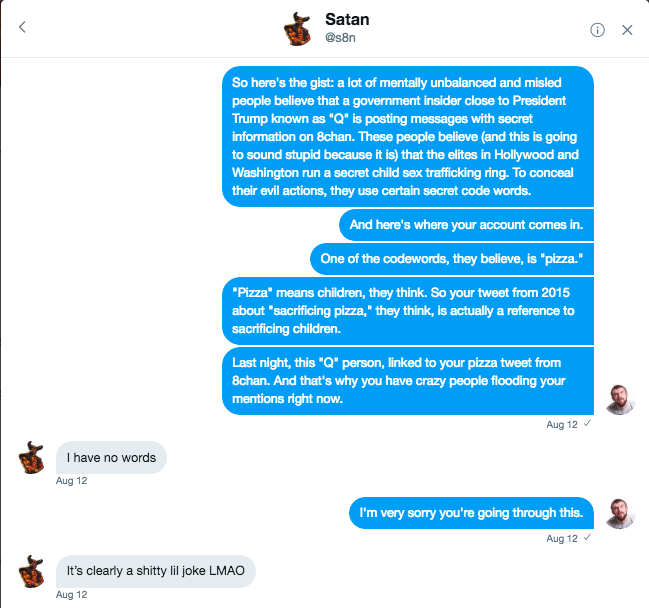 But in 2015, Michael made the mistake of making this joke.

Someone sacrifice a pizza or something I'm getting bored of goats

On the previous evening, the mysterious 8chan poster known as “Q” linked to the “sacrifice a pizza” tweet. Q implied that it was a secret coded message about sacrificing children. 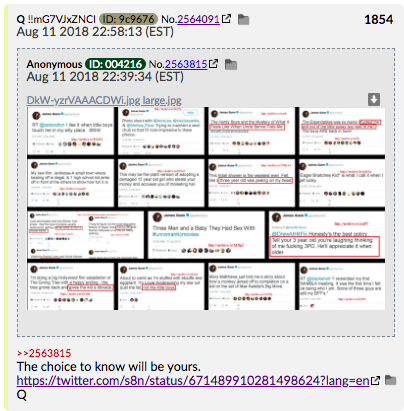 Q targeting his particular tweet from this particular account was consistent with themes that Q has explored since the anonymous 8chan user first started posting in October 2017. Namely, Q drop 1854 touched on alleged pedophilia by the elites, satan worship, and a belief that these shadowy elites communicate their most heinous crimes through coded messages.

I, unfortunately, know how QAnon believers tend to behave online. I had been casually following them and their baseless conspiracy theories since earlier this year. In July, I noticed that the number of QAnon believers were growing online. I also noticed some of their beliefs were being promoted by mainstream pundits like Charlie Kirk.

Since then, I’ve followed them more closely and began tweeting about their beliefs and actions through my Twitter account Travis_View.

The evening before Michael contacted me, I noticed the Q drop about s8n and explained it in a tweet.

In a late night shitpost, Q links to the @s8n parody Twitter account.
The tweet says, "Someone sacrifice a pizza or something I'm getting bored of goats."

When Michael noticed that there were a bunch of crazy people in his mentions, he searched Twitter for an explanation. He noticed my tweets and reached out.

I advised Michael on how to handle them. The best tactic in these situations is “don’t feed the trolls.” 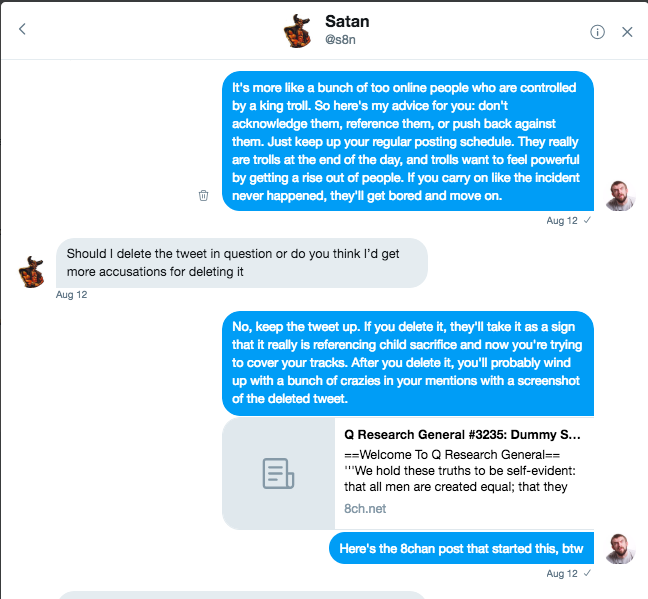 I figured that once they see that they aren’t getting a reaction, they’d move on quickly.

Unfortunately, Q did something I didn’t expect: post about the s8n account again. And this time Q made comments to inflame the many people all over the country who follow Q’s every drop. Q falsely said that the s8n account “HOLDS many ‘questionable’ message from people of power/influence” and is “run by BIG NAMES.” 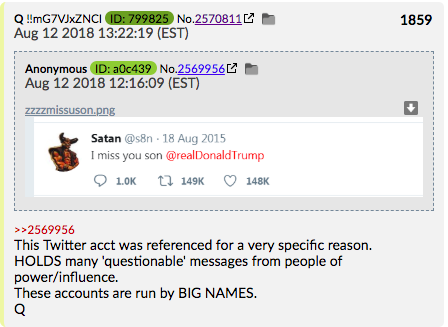 This meant I had to deliver some bad news to Michael. 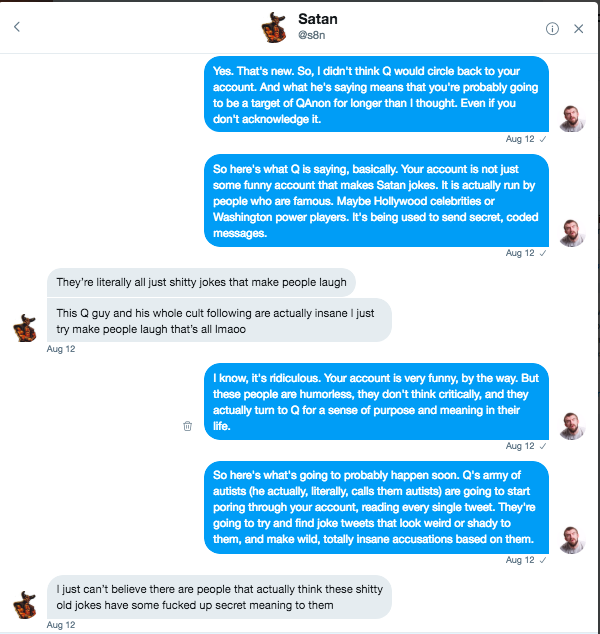 On 8chan, the QAnon believers did what they always do when handed a target: dig for as much information as they can and craft a conspiracy theory to fit the Q drops.

Naturally, they documented every time the s8n account referenced pizza, children, or Donald Trump. They compiled them into this image. 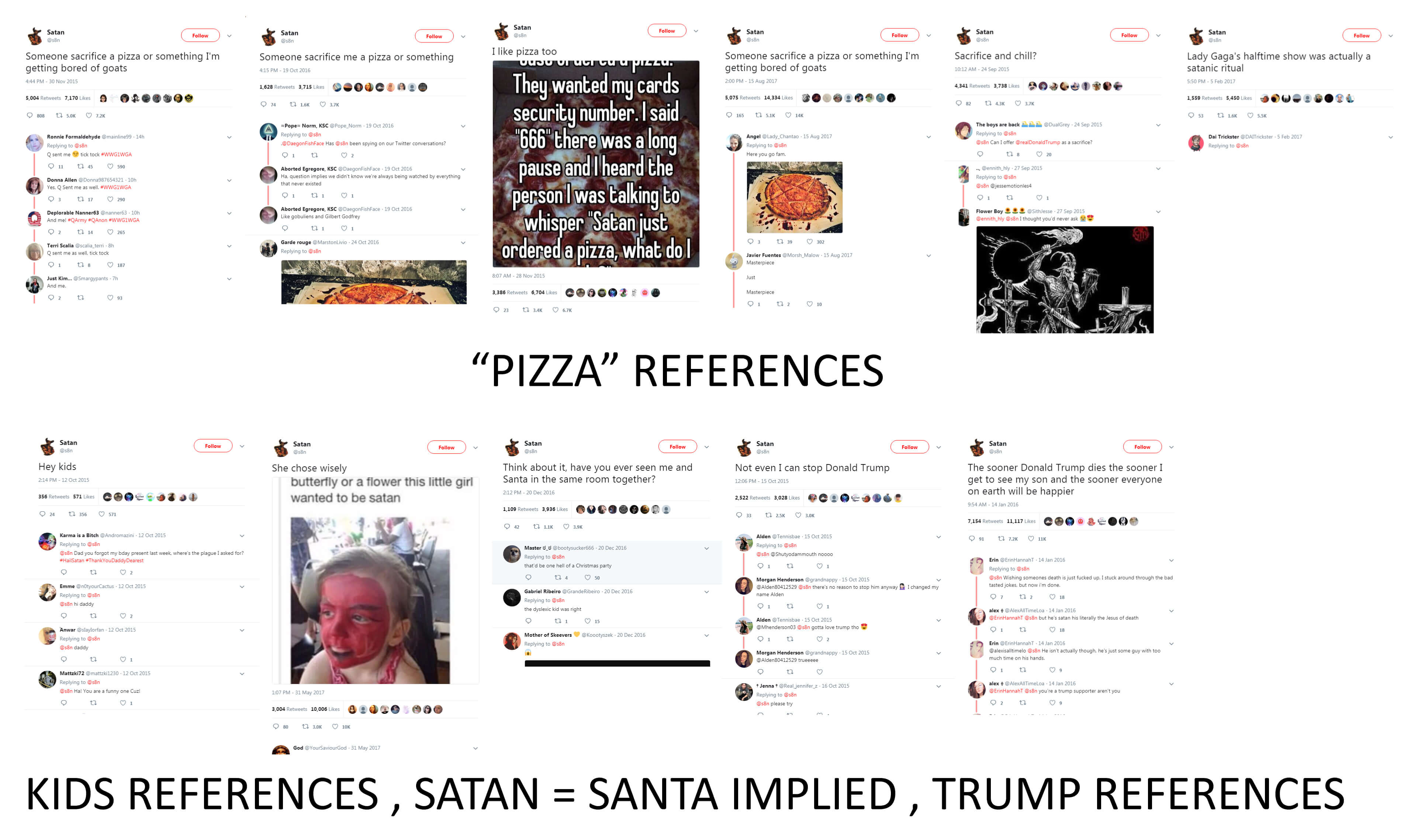 QAnon believers to an article published in the Observer about Michael, which includes a selfie of him. Though the Observer article doesn’t mention Michael’s last name, it provided them with enough information to dox his full name.

Some on the 8chan /qresearch/ speculated that Michael was merely the “front” for the “Big Names” Q claimed ran the s8n account.

Though temporarily trapped in a bizarre situation through no fault of his own, Michael handled the situation well. 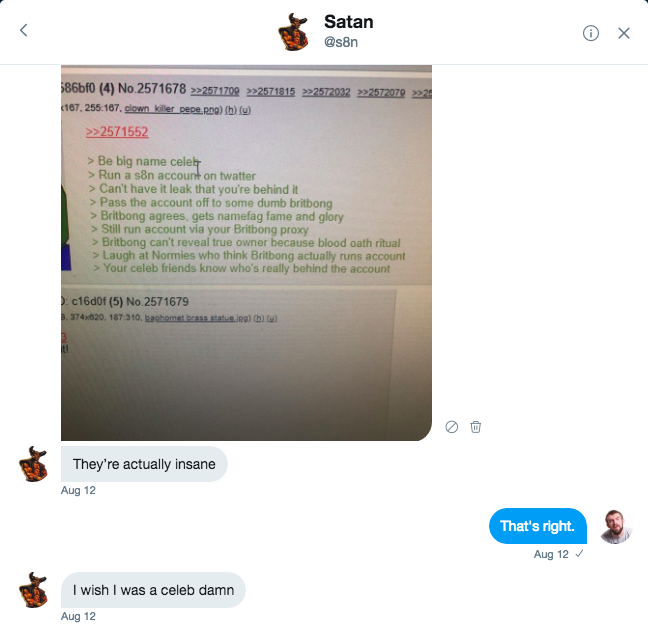 On Twitter, Michael adhered to my “don’t feed the trolls” advice, despite the fact that QAnon believers continued to harass him on Twitter.

More Q-Anon responses to a comedy account on Twitter that makes jokes about being the devil. pic.twitter.com/B01GNi5rR1

But on Reddit and 8chan, Michael chose to defend himself. 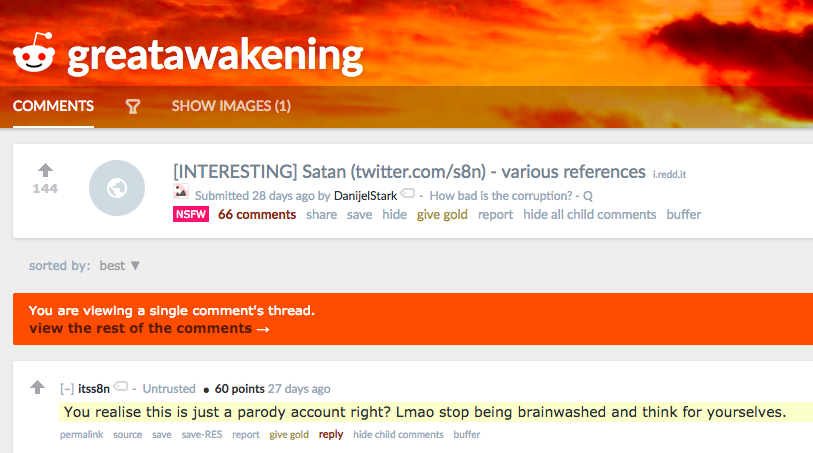 Michael also made a post pleading “leave me alone.” It has since been removed.

Michael later told me that he decided to jump into the fray on Reddit because, “There were a lot of people defending me on other subreddits.” But on r/greatawakening, “they just said there was no harassment and that I lied about it. Then they deleted my posts and banned me from the sub.”

More bravely (or foolishly, depending on your perspective) Michael defended himself on 8chan.

Q releases his Q drops on 8chan, and consequently, it’s the home base of the most dedicated QAnon believers. “I did go on their 8chan thread [and] try [to] talk some sense into them, and surprisingly a good amount did realize I was just an innocent person,” Michael said. “But there was also people who were 100% sure I was someone in high power.”

To verify his identity to people on the /qresearch/ 8chan board, Michael posted an Instagram video of himself. That evidence wasn’t satisfactory to many on the board. One anon photoshopped a still from the video to make Michael look like the devil. 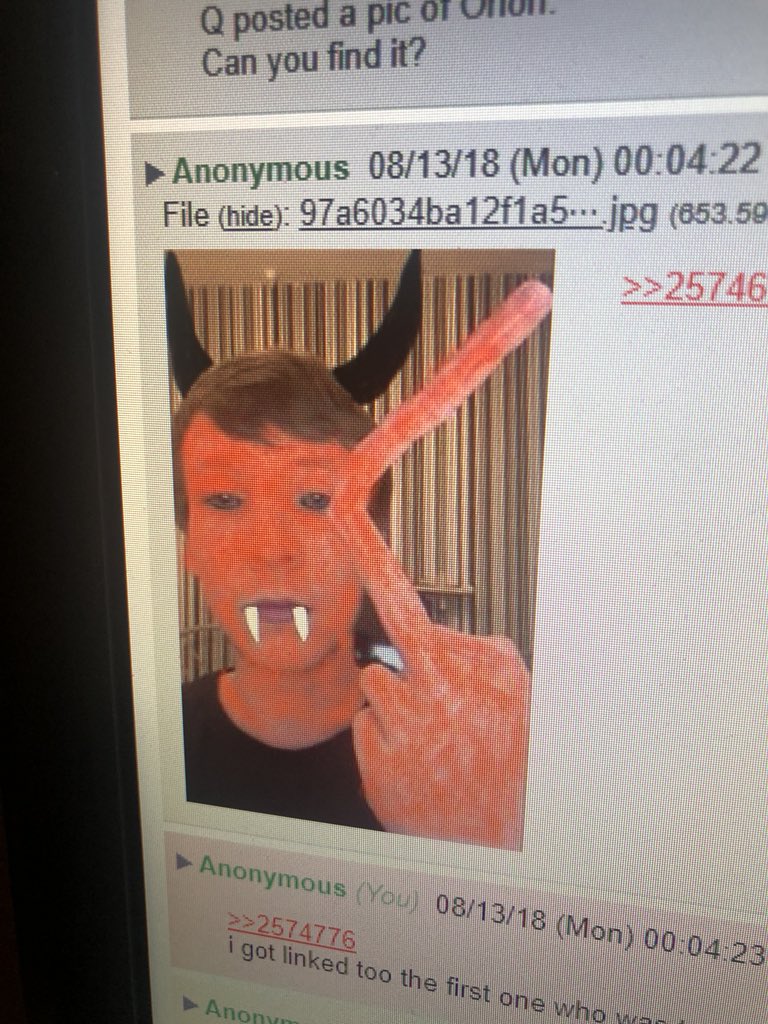 Fortunately, as predicted, QAnon believers moved on. The day after, Q focused on more typical topics, such as why Q believed that “FAKE NEWS” is “THE ENEMY OF THE PEOPLE,” Bill Maher, and whether the Trump Tower meeting was a “setup.”

This behavior is typical for QAnon believers whenever they’re given a target. First, they focus on the target intensely with wild accusations. Then they perform “research” to back up their accusations. Finally, as their focus is directed elsewhere, they forget about the target. They behaved the same way when Q attempted to spark harassment campaigns against Bill Maher and Rainn Wilson. QAnons believers moved on shortly after the Q drops about them.

But this episode was unique because of Q’s choice of target. Q didn’t focus the efforts of QAnon’s “gold star researchers” (as Q calls them) on a celebrity, politician, or major organization. Instead, Q targeted an obvious parody account run by a 20-something British man. That’s concerning because it’s evidence that Q has no qualms about targeting innocent people who aren’t public figures.

Q mentioning the s8n account inspired an online harassment campaign that was massive, multi-platform, but ultimately short-lived. Thankfully, though, the campaign never spilled out into the real world. QAnon believers have previously been involved in an armed standoff, arson, and accusations that a homeless camp was in fact a child sex-trafficking camp. There is no guarantee that the next time Q targets an innocent person, the incident will resolve without serious real-world consequences.