Earlier this week, New York Post columnist and Washington Examiner political reporter Salena Zito published a column that purported to debunk allegations that she had engaged in mischaracterization, plagiarism, and fabulism in her reporting. The accusations, raised by some pseudonymous/anonymous Twitter accounts and reported by HuffPost and Contemptor, targeted her recent book The Great Revolt and reporting career across multiple outlets.

While Zito’s media defenders were quick to declare victory and claim her column was a complete annihilation of the allegations made against her, a closer look reveals that not only does her column — which was marked “Opinion” in both the Post and Examiner — not slam the door on the controversy, it’s actually given it more life. And besides opening up Zito to more scrutiny, it could also damage the credibility of her colleagues and editors.

In her column, Zito addressed one example surrounding a subject in her book that was raised by a recently created anonymous account and expanded on by HuffPost’s Ashley Feinberg. Zito contended that her characterization of Republican committee member Dave Rubbico as a “lifelong Democrat” was accurate as he didn’t run for office until after her interview with him and a 2017 op-ed he wrote slamming Obama didn’t do anything to prove he wasn’t a disenchanted swing voter. She went on to include a transcript and audio recording of her interview with Rubbico.

But, as Splinter’s Paul Blest pointed out, a quote she attributes to Rubbico in her book is revealed to be heavily cherry-picked and markedly different than what he told her.

Here’s the quote in the book:

And here is the excerpt from the audio clip she included in her column (emphasis included):

Rubbico: And then immigrants and refugees were really, we would be first up when they come to the states it seems. All of the refugees can’t get benefits for five years, immigrants became the big problem.

I can’t say names because of confidentiality, but basically there was a family from…Iraq? From the biggest city in Iraq or somewhere, him and his wife and all their kids: “Hey Mr. Rubbico, give me money. Give me money.” I said “Sir, you’ll get all of the money you’re entitled to.” “Give me money,” and then he’d wear a three-piece suit. Who cares? But then we sent him on job leads and he’d work thirty minutes and quit because it was too dirty. So I sanctioned their food stamps, and I believe we terminated the family’s food stamps, but when Obama became president, a lot of that stopped and became very hard. Unless we were willing to give a right foot or right hand, you don’t dare take a client’s benefits away. So that contributed to it, the way immigrants rip off the system.

A Romanian woman who had a job working with her two ex husbands. Who cares? But with all her gold jewelry, and her two cell phones, and she kept talking on the freaking cell phone when i’m trying to conduct an interview. I was very apprehensive about asking her to put the phone down. And she bragged that she owned property, but it was in Europe. And we couldn’t enforce her to make her sell it to get on food stamps, so she’s allowed to have property there and get benefits here.

Zito: So the corruption bothered you?

Rubbico: Fraud, corruption, yeah. But basically management was saying at a state level, make clients happy at all costs. And I wasn’t ready to deal with it anymore. And there was an Iranian immigrant who had a nice, good job at [unintelligible] and they end up getting pregnant by their boyfriend, and didn’t know where the boyfriend lived, but still got pregnant. I almost blurted out, “What, did you do it through the keyhole?” But I stopped myself.

As Blest noted in his analysis, “it appears that Zito essentially spoonfed Rubbico this too-perfect line to close out a thought that came before an anti-immigrant rant, and then pasted it right on the end of a nice and clean quote from a few minutes prior, trimming all the xenophobic (and in the last case, sexist) fat in the process.”

At times, writers will clean up a direct quote from their interview subjects by removing extraneous articles and phrases (like “uh” and “umm”), but it’s a whole other thing to remove two-plus paragraphs of commentary and then slap on a narrative-boosting remark at the end that only came after a leading question. At the very least, this is misrepresentation and completely unethical, especially the way Zito presents it in her book — a book that makes the case that Trump supporters weren’t fueled by white resentment and xenophobia.

It doesn’t stop there, though. Digging further into her Rubbico transcript, Washington Monthly editor Gilad Edelman discovered that Zito had inserted a strong adjective to a Rubbico quote, giving further credence to the allegation that Zito manipulates (and perhaps fabricates) the quotes of her subjects.

1/ So, in her own self-defense column, @SalenaZito seems to have accidentally given us proof that she manipulates quotes. Notice the difference between the transcription of her interview with Dave Rubbico and the way she quotes him in her book: pic.twitter.com/eY5xwYpIJO

Journalists clean up quotes all the time (cutting out "ya know," etc.) But *inserting* an adjective into a sentence? That's really weird.

While these are the most damning instances of Zito’s self-defense backfiring on her, there are other notable examples that don’t exactly bolster her case that she’s being unfairly maligned. Defending herself for not specifically highlighting that Amy Giles-Maurer is a Republican party official — something that led to the New York Times correcting an S.E. Cupp op-ed, with Cupp saying she was unaware Giles-Maurer was a Republican — Zito laughably pointed to an image of Giles-Maurer included in a Post column as proof that she disclosed her status.

also i can’t believe everyone missed this glaring indication of her status as a republican party official pic.twitter.com/GRPNSdNlRO

While Zito has said she audio/video records “most” — used to be all — of her interviews and has them transcribed, she only provided the one audio clip of Rubbico. Regarding an allegation that she fabricated a quote from a semi-anonymous subject known only as Greg, Zito provided an image of her handwritten notes showing he used the archaic phrase “stagery” — a seldom-used word Zito herself has used in the past. Besides it being fairly easy to manufacture notes after the fact, one thing really stands out — everything shown on that page found itself in the corresponding article. 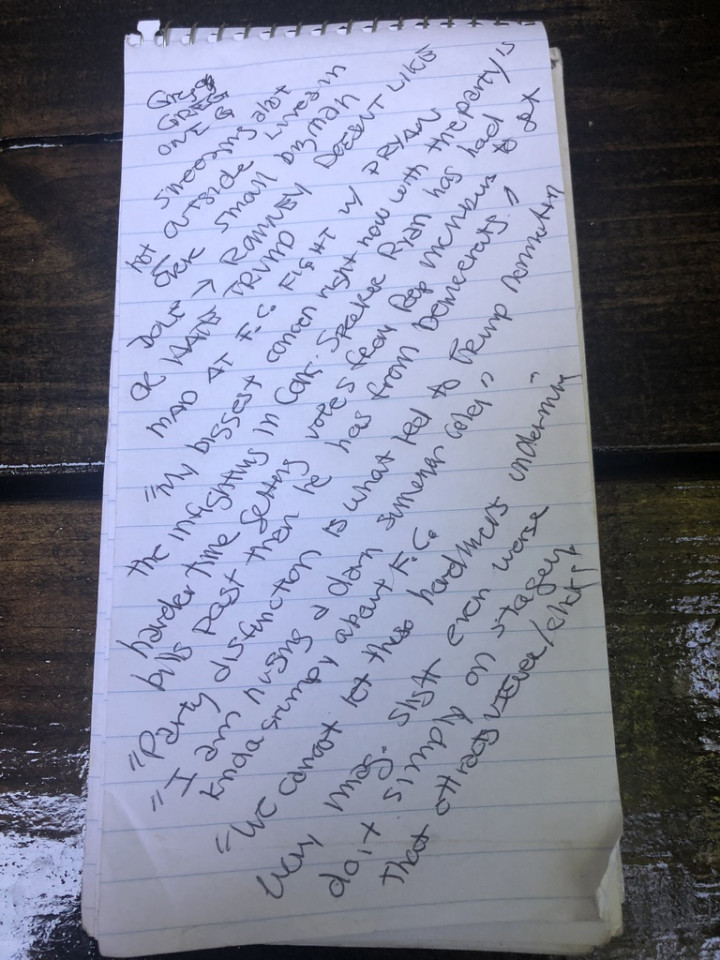 So, while she didn’t use whole swaths of Rubbico’s quote in her book and smushed it together to give a more appealing phrase from the Trump voter, when it came to Erie County “small businessman” Greg, she used everything he purportedly said, not excising one bit. That seems…odd.

When Zito’s piece came out on Tuesday — first published in the Post, then cross-posted to the Examiner — conservative columnist Bethany S. Mandel took to Twitter to not only hype Zito’s article but to also reveal that her husband — New York Post Op-Ed editor Seth Mandel, who has told this author he isn’t Zito’s editor — helped Zito put her response column together. Bethany Mandel also noted that Zito’s editors obviously stood by her reporting because of the decision to publish the piece.

Also, props to my husband @SethAMandel, who spent his entire Labor Day weekend, late into the night last night, and all day today, helping Salena compile all of this. Not because it was his job (it wasn't, actually), but because it was the right thing to do.

My husband spent hours going through audio files, transcripts, and more. The Post provided several examples of the evidence Salena has. What is shown is *far* from everything, it's the tip of the top of the iceberg. All of her editors stood by her for a reason. She's through AF.

We lost our entire holiday weekend to anonymous trolls trying to destroy the life of a kind & honest 60-year old grandmother. So, no, I'm sorry, anonymous nasty trolls, you can go fuck yourselves with these "but what about…" questions. The case has been made quite convincingly.

The New York Post’s op-ed editor being tied to this piece that now practically begs for more scrutiny into her reporting seems…not good.

Over the past week-plus, we have reached out to New York Post editor-in-chief Stephen Lynch — we haven’t been able to identify Zito’s immediate editor there — and Washington Examiner political editor Jim Antle numerous times for comment on Zito’s reporting. (Antle has declined to comment, and Lynch has not responded.)

We reached out once more to both editors to ask about the editing process of Zito’s self-defense column and the decision to publish it, considering the issues that have been identified in the proof Zito provided in the piece. We will update this piece if we hear back from them.

In the meantime, one would have to think that the furor over Zito’s reporting and the allegations of fabulism and mischaracterization isn’t going to die down anytime soon.

UPDATE 9/7/2018 9:55 PM ET: Antle responded back to Contemptor, stating that the column “isn’t something I was involved in, sorry.”