Polls, polls and more polls. Seems like every day we are greeted with a bunch of new polls. Some of the polls are from states, showing us how n upcoming primary is shaping up. Some are approval polls for candidates, the sitting president or our embattled Congress. And even more are national surveys telling us how candidates will fare against each other.

However, one type of poll that is getting more and more interest is the favorability one. You know, the one telling us how people view certain candidates or elected officials. And what we’ve learned is, outside of Bernie Sanders and possibly John Kasich, nobody really likes the people running for the White House all that much.

However, while Hillary Clinton’s favorable numbers are upside down, and Ted Cruz’s seem to be getting worse, one thing has become apparent during this endless election season — the vast majority of this nation can’t stand Donald Trump. The fact is, Trump only scores a net favorable rating with Republican white men. That’s it. Every other demographic despises the sweaty lump of pee-stained cotton candy.

In the Washington Post’s latest survey, they show that 67% of Americans have a negative view of the Trumpster. That is two in three. For perspective, Clinton’s unfavorable rating is 52%, and she’s had the right-wing press demonizing her for a quarter of a century now.

But, to see just how gotdamn unelectable The Donald really is in a national general election, one need only look at how he fares with minorities, women and young people. First, here’s a chart showing his favorability by race: 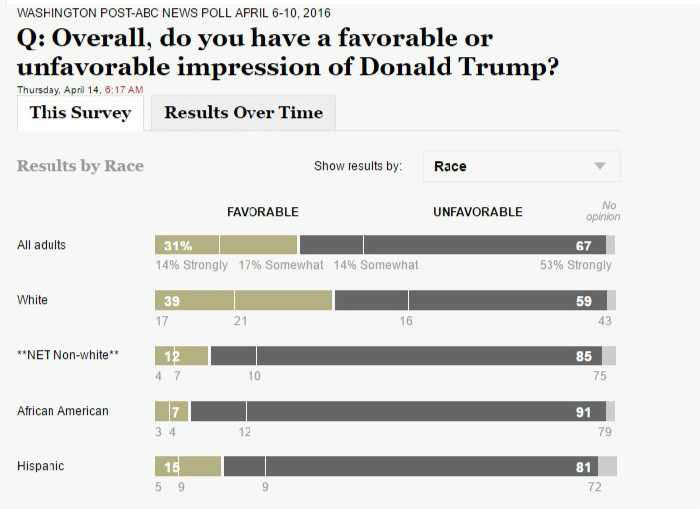 Holy shit! 91% of blacks and 81% of Hispanics just plain don’t like the former Apprentice star. Hell, even 59% of white folks dislike the dude.

Well, how about the ladies? You know how much Trump cherishes women, right?

Eesh! I guess personally attacking Megyn Kelly for months for asking you about your sexist past, gaslighting a female reporter, criticizing Heidi Cruz and Carly Fiorina for their looks, calling for women to be punished for abortions and a whole litany of other misogynistic comments and actions over the years will kinda do that to you.

Finally, we have voters under 40: 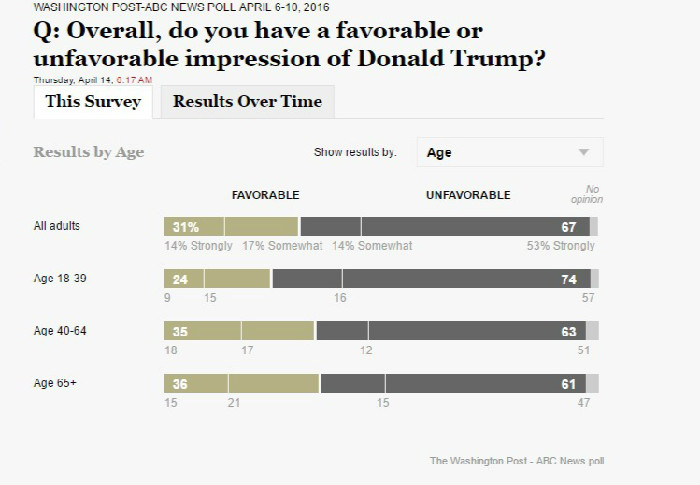 But, but, but…what about Celebrity Apprentice, Wrestlemania and Twitter? I thought all the young whippersnappers liked that stuff?

Anyway, this is your likely GOP nominee for the White House. You can currently find Reince Priebus curles up next to a bottle of cheap hooch.

Jake Tapper Criticizes Lara Trump for Mocking Joe Biden’s Stutter, Then Claiming She Knew Nothing About It