In the wake of President Donald Trump’s rare 60 Minutes interview that aired Sunday night that featured Lesley Stahl pressing the president on several topics and offering up occasional pushback, Fox & Friends host Ainsley Earhardt deleted a tweet in which she wrote the president was “peppered endlessly with questions” during the interview.

Taking to the air this morning, Earhardt and her fellow F&F co-hosts praised the president for how he handled the interview while criticizing Stahl for interrupting the president and asking follow-up questions.

“So if you watched the full interview, you can see, she does interrupt him a lot,” Earhardt said. “And people — many Republicans thought it was disrespectful and obnoxious. Many people thought it made him look better because he did answer everything correctly. But she gave a tough interview, and when you’re a journalist, you want to ask tough, fair questions. Many people had a problem, though, with the fact that she was interrupting him a good bit.”

Co-host Brian Kilmeade, meanwhile, didn’t appreciate Stahl asking Trump about climate change — a subject the president has skated on in previous interviews and during the 2016 presidential election.

“She really believes in global warming, and that’s fine,” he stated. “And man’s role in climate change, and that’s okay. But I don’t think you should bring your point of view — she was trying to win over the president with her point of view.”

As the show was on the air, Earhardt promoted one of the segments with a tweet that read as follows: “President Trump peppered endlessly with questions in an interview with ’60 Minutes.'” 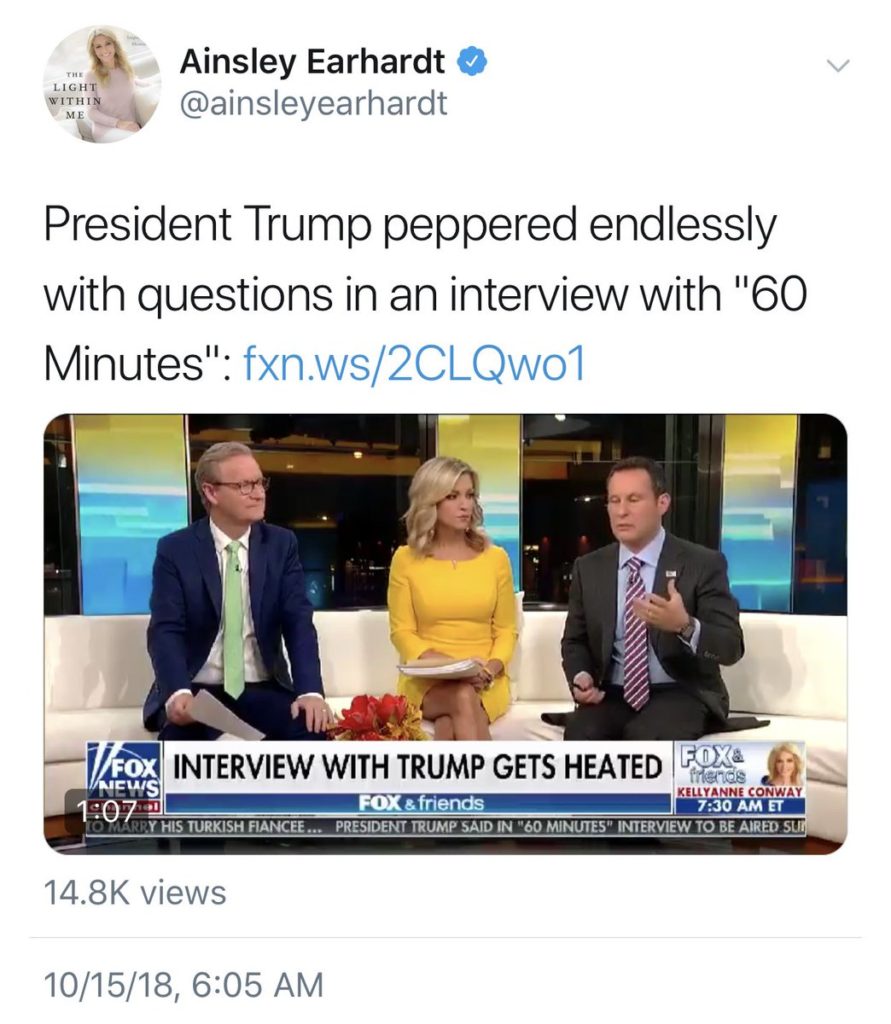 The tweet was immediately met with mockery, especially from liberals, considering that Earhardt appeared to be sending a message that it was abnormal for an interviewer to ask their subject numerous questions.

The horror! Questions…. in an interview! How outrageous! 🙄😑 https://t.co/ArJwwuDOyz

Questions? In an interview! Outrageous! https://t.co/1Ql2LDuE8B

What kind of monsters ask QUESTIONS in an INTERVIEW??? pic.twitter.com/2BxekirLxU

In the end, Earhardt deleted the tweet. Which would seem to be the wise move.