Mediaite didn’t do itself or the fourth estate any favors on Saturday when it published an article about a tweet from President Trump which falsely claimed that millions of fraudulent ballots were cast in the presidential election. 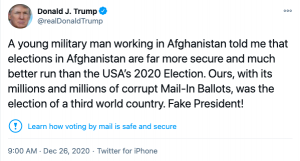 Trump cited an anonymous “young military man working in Afghanistan” who told him that elections in that country “are far more secure and much better run than the USA’s 2020 Election.”

“Ours, with its millions and millions of corrupt Mail-In Ballots, was the election of a third world country. Fake President!”

Given Trump’s track record of propagating dubious hearsay, this interaction with the “young military man” probably didn’t happen. And there’s no evidence for his claim that millions of ballots were forged or are otherwise unacceptable because it isn’t true.

Unfortunately, Mediaite‘s Caleb Howe misread the president’s tweet in an article titled, “Vacationing Trump Says Afghanistan Better Than United States.” The article was posted to Twitter with the same headline. 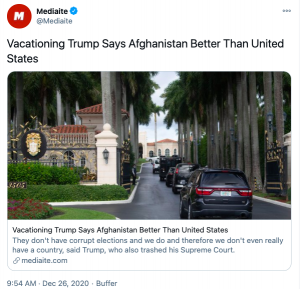 Howe wrote that the president “said on the day after Christmas that the United States isn’t as good as war-torn, Taliban-infested Afghanistan.”

But that’s not quite accurate. Had the article been marked an opinion piece, it would have earned more editorial latitude for such a loose description. But it wasn’t.

A glaring typo in the piece —”Covid relief belief”— suggests that Howe was pressed for time. Regardless, a simple edit could give an accurate rendering of the president’s incorrect and irresponsible message. In fact, the title that appears when hovering over the webpage tab would be sufficient because it includes the subject of Trump’s tweet: “Trump Says Afghanistan Better than U.S. at Democracy.”

Yet when some Twitter users raised this issue with Howe, this is how he chose to respond: 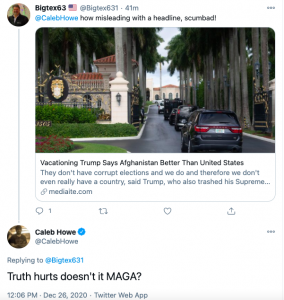 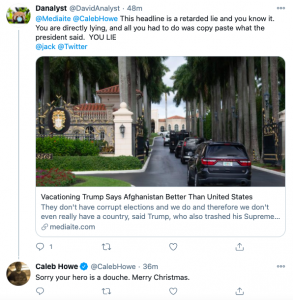 Howe was asked to comment but did not respond in time for publication.

There have certainly been more consequential lapses of judgment in the press, but this instance is one in which a clarification is still needed. Otherwise, it will remain as just the type of thing Trump and his allies point to in order to fuel their battles against media outlets they don’t like.