Before I even start writing the rest of this article, I want to make one thing absolutely clear- I did not enjoy Batman v. Superman. I, like a lot of moviegoers, was impressed by the trailers. I’d go as far as to say that I was “drooling at the mouth” excited about the movie. After all, this film was promising something that I’ve wanted since I was a kid; a big-budget battle between two of my favorite DC superheroes!

Unfortunately, I was very unimpressed with the movie I saw in theaters. But I’m not going to get into everything I didn’t like about the movie, that would turn this article into a short story. Besides, why list off the things I hate about Batman v. Superman, when you can read some painfully true criticism from Batman himself? 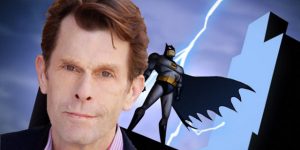 Kevin Conroy is the definitive Batman, in the same way that his co-star Mark Hamill is THE Joker, no matter who else portrays the role. Conroy has voiced the Caped Crusader in several titles, including Batman: The Animated Series, and the award-winning Arkham video games (though he, like the rest of us, skipped Origins).

Being the voice of Batman, Kevin Conroy has obviously seen the character he’s spent so much time with duking it out on the silver screen with Supes. It’s taken a while, but Conroy has finally sat down and talked about what he thinks of the film.

In an interview with IGN, Kevin Conroy offered his take on Ben Affleck’s live-action version of the Dark Knight, speaking about one thing he disliked in particular:

“Personally I love the fact that Batman – in the stories I’ve done, and the way he’s been rendered by Bruce Timm and Paul Dini, the people I’ve worked with most closely – he never kills anybody. He doesn’t cross that line. Batman is not a killer.”

Kevin Conroy clearly has some issues with the way this new Batman was handled, but should we listen to him? Well, besides the fact that he’s voiced Batman almost 300 times in his career (a fact the IGN article makes sure to note), he makes a pretty good point.

We all know that Batman has killed in the past, but the amount of random nameless thugs he took down in Batman v. Superman reached ridiculous levels by the time the film was over. The appeal of Batman is that, essentially, he’s one bad day from being a criminal. I know I’m paraphrasing the Punisher’s words from season 2 of Daredevil, but they’re as true for the Dark Knight as they are for the Devil of Hell’s Kitchen.

I don’t need to remind you of Batman’s backstory, because it’s as well known a fact as “not breathing will kill you”. However, a huge part of Batman’s story that people seem to forget these days is that he makes it a point not to kill people. Sure, he’ll beat them to the edge of their life, but he’s vowed not to kill unless absolutely necessary- it’s just his special code of honor.

Like I said, he has killed in the past, but usually only when it’s really necessary. There have been alternate, murderous versions of Batman, but the Bruce Wayne portrayed by Ben Affleck in BvS is based on the mainstream universe version in the comics.

Now, obviously with a character as old as Batman, we’re bound to get some different interpretations. Taking some liberties and turning the character into a trigger-happy vigilante is risky, but it could be done. However, what Kevin Conroy neglects to mention is that this Batman is also super hypocritical.

Not only does he kill directly (as in, intentionally gunning down cars full of bad guys), but he then turns around and calls Superman a threat for indirectly causing the deaths of thousands of people in Metropolis during the events of Man of Steel.

This was honestly my biggest issue with the film. I may have been thrown off with how willing Batman was to kill, but I was definitely more shocked at how ridiculous it was for him to be angry at Superman. In the interview, Kevin Conroy made another good point about why Batman shouldn’t be so ready to pull the trigger, mentioning how Batman usually takes his criminals to Arkham Asylum, and without that element, we likely wouldn’t have the Arkham video game series. I sincerely hope Warner Bros. takes Conroy’s words to heart, before we look up one day and Batman’s gallery is fresh out of rogue’s.