Chachi Says Obama’s A Secret Muslim: And So Continue The Reasons Why Media Lets Us Down

I never watched the HBO series Newsroom until last night. My girlfriend always liked it, and last night we couldn’t sleep, so we started a late-night binge of the Aaron Sorkin creation.

I say “binge”. We watched two episodes before sleepily retreating back to bed.

Watching the pilot, there came a moment when Jeff Daniel’s character proclaims, in a discussion about the role of news in people’s lives, that people “pick their own facts”. Now, admittedly I’m way behind on any type of review of Newsroom, but that bit stuck out immediately.

The litany of examples which build on that point are manyfold. One could delve into any number of news organizations which, having to whore themselves for ratings, need to to provoke interest in particular narratives.

Enter Scott Baio, most famously of ’80s sitcom Charles in Charge, in an interview with (spoiler alert: Fox News) Fox Business proclaiming at once that President Barack Hussein Obama is probably a secret Muslim, blah, blah, blah… so it goes.

For the nostalgic, Baio joins a troupe of ’80s and ’90s celebrities to have some relevancy breathed into their being via right wing political talking points. From “political analyst” Stacey Dash, to Lorenzo Lamas of The Renegade, SNL’s Victoria Jackson and Kevin “Hey, kids, remember me?” Sorbo from that series rooted in Greek mythology that you know you loved watching.

In the United States, we have freedom. Lots of countries also have freedom. Most even feature some measure of democracy, it turns out. But even noted anti-establishment icons like Noam Chomsky identify that the US goes a long way to preserve freedom of speech.

In a 2008 interview with German paper, Der Speigel, Chomsky stated:

“In many respects, the United States is a great country. Freedom of speech is protected more than in any other country. It is also a very free society. In America, the professor talks to the mechanic. They are in the same category.”

As with many Chomsky statements, like those on Bernie Sanders, these need to be viewed in a very rigid context because if you dig deep enough, you’ll discover that caveats come with many of the professor’s valid observations.

But to segue into my main point I will again borrow from the good professor.

This carries significance. We’re all entitled to an opinion, but, so the cliché goes, we’re not entitled to our own facts. If anyone is interested in promoting democracy in this constitutional republic of ours, we find ourselves obliged to recognize the need for informed discussion among the people in order to secure that the opinions formed are done with the best information and the best informed opinion.

In the United States, the mainstream, for-profit media retreats from this responsibility. The aversion to providing the public with the best information available to form the best opinions cannot be better epitomized than by Fox News. It’s not that other major networks are sticklers for providing the best content they can, it’s just that Fox sets the bar at such low levels, with such a measure of pride, that drags the entire media industry with it.

The strategy is so focused on ratings, that Fox’s attempts to outcompete its competitors has long aided in the compromised legitimacy of the mainstream media. The popularity of alternative media demonstrates this quite acutely.

To feature Scott Baio in a news segment which ultimately ends up with him endorsing a conspiracy theory is a self-reinforcing strategy to provide the audience with sustained opinions that have no basis in reality. Again, while Mr. Baio is entitled to his opinions, does it help advance dialogue around issues of Islam and fundamentalist violence by continually pushing the ideas of any celebrity that break from the Hollywood liberal bloc?

Just because Scott Baio shares a different opinion on current affairs doesn’t necessarily equate that opinion to something the public needs to know in order to form a better understanding of the issue; but this fetish keeps reappearing — even on the left, as Russell Brand has gotten more airtime in recent years than actual academics or intellectuals who make a living studying and analyzing the systems and issues pointed out by the faces used to cash-in on the featured content.

Do I bring up Chomsky again? When was the last time you saw him on CNN?

Scott Baio as a featured interview is an embarrassment for the entire US for-profit media. A type of embarrassment which has delivered upon us one of the most embarrassing presidential races in our nation’s history.

Donald Trump versus Hillary Clinton. Really? After 250 years, that’s the best we can do? A war criminal versus an aspiring war criminal.

I predict some Sandernistas will object to my placing of Mrs. Clinton in direct competition for the presidency with Trump, but you guys will just have to get over that. Either join the actual left and build a movement, or go vote for Hillary.

In a recent interview with Joe Scarborough on MSNBC’s Morning Joe, Ohio Governor and former Republican presidential candidate John Kasich lit into the media when asked “How did Trump happen?”

“The media gave [Trump] $2 billion in free coverage!” was the basis of the governor’s reply.

That’s up to $2 billion in free coverage to a candidate who has yet to produce a substantial campaign platform. There’s only so many times we can hear that the promised military policy will “make [our] head[s] spin.”

There’s only so many times that Trump’s repeatedly baseless claims about Mexicans and Muslims can go unchallenged. And even when the press gets ballsy enough to put The Donald to scrutiny, they also cover his Twitter rampage thereafter, giving the impression that Trump is a no-holds-barred champion of that anti-PC crowd that will tell blacks to “get over” slavery, but to “never forget” 9/11. That nobody should be offended by the use of the N-word, though outrage over baggy pants is justified.

If we’re actually asking how Trump, whose PolitiFact rating is abysmal, happened, where the hell were we during the presidency of George W. Bush? The rise of Sarah Palin? Of Michele Bachmann? Of Christine O’Donnell? Of Orly Taitz? And, of course, the birther period of Trump’s career?

The Republican Party has courted and incubated this anti-intellectual trend for well over a decade. Appealing to myopic versions of the “Average American”. Of Joe “Six Pack” and Joe “The Plumber”.

You get there, in part, by inviting Scott Baio to come on live television to give his expert analysis on our political climate. From “death panels” to Mexico sending “rapists” to Obama being a “secret Muslim”, the constant show that these views get has beaten back the onus of those making such claims to be factual: thus, people pick their own facts — or, they pick what they view as fact.

And it’s not like the other side of the aisle has gotten any better at fomenting a resistance. The liberal response has been smug condemnation of working class white lifestyles and the continual promotion of the Democrat Party as if it presents some valid alternative to the Republican-led direction.

We get the same policies, we just realize them through conduits of demonizing different parts of the population. Whether there’s a hijab on your head or a Coor’s Light in your hand, you’ll be transformed into a stigma, but we still end up with a government which has steadily distanced itself from public opinion for at least 35 years.

Recently, on Real Time with Bill Maher (and I promise I’m not a paid shill for HBO programming), Rage Against The Machine guitarist Tom Morello, while discussing the formation of new supergroup Prophets of Rage, pointed out the tendency of the media to paint the campaigns of Donald Trump and Bernie Sanders, both considered outsiders, of challenging that status quo.

“The media has both referred to the Trump campaign and the Sanders campaign constantly as ‘raging against the machine’. [Prophets of Rage] came to set the record straight.” 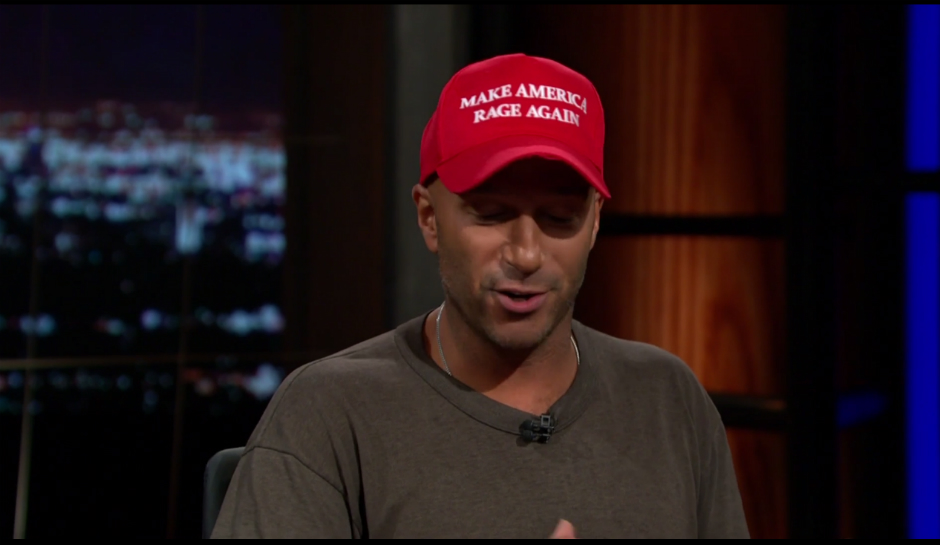 Seemingly puzzled by Morello’s lack of endorsement for Bernie Sanders, Maher pressed Morello on this and elicited a response that he should have seen from a mile away.

“While I admire the fact that he’s tried to hijack the corporate Democratic Party and make it a people’s Democratic Party, that’s one strategy, that’s a fine strategy and that may or may not work; my strategy is pitchforks and torches and drive them all into the sea.”

“You’ve seen The Purge, haven’t you?” asked Maher equating Morello’s response with advocacy for anarchy and attempting to paint anarchy as some sort of chaotic mess of violence as if we’re not already led by the most violent government in the world, with the arguable exceptions of global bright spots like Turkey, Syria and Israel given their current involvement in brutal minority repression, civil wars or military occupations respectively.

In essence, no, Bill. The Purge: Anarchy, a movie, a product designed for consumption and marketed for profit, isn’t an accurate portrayal of actual anarchy. Shocking, I know. Hollywood got us all again.

This kind of minimization of the dialogue, with maximization of unenlightened views at its forefront from “both” sides, is the reason why we get people flocking to Trump after he has made a routine of making false statements, spoken at a third grade reading level. Why people flock to Hillary under the guise that she’s a feminist when little to no such evidence exists. Why people flock to Bernie Sanders under the guise that he’s a socialist when he isn’t.

We can’t identify the terms because they are so endlessly and routinely misrepresented in the media, making co-option of the masses by the major parties that much easier, which, again, brings the choices of the US electorate down their lowest-common denominators 250 years on.

Shouldn’t we be better than this by now? Or is Tom Morello onto something?