Shortly after posting a news story with the headline ‘Trump Drops Devastating Nickname on Stormy Daniels’ after the president called the adult film star “Horseface” while gloating about a federal judge tossing her defamation lawsuit, the conservative news site decided to go right down in the gutter.

In a tweet captured by The Daily Beast’s Maxwell Tani, the Tucker Carlson-founded outlet tagged Daniels while declaring that she’d been “roasted.” They also attacked a watermarked image of a horse’s face accompanied by the caption “The Stormy Daniels Halloween costume starter pack.” 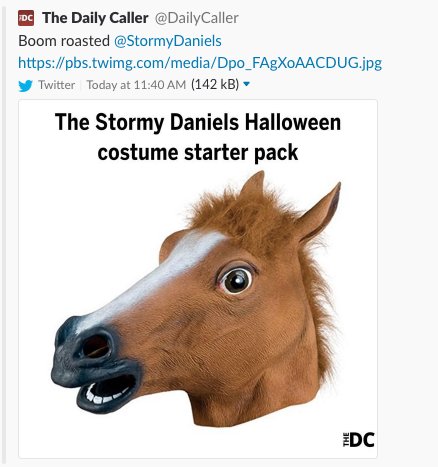 Someone at the outlet, meanwhile, must have come to their senses and realized just how bad taste the tweet was as it was deleted in short time.

The reaction to the image, however, caused head-shaking and outrage nonetheless.

Journalism at its finest. #facepalm https://t.co/qac9VbJGaC

This is a leading Republican publication started by Fox News’ Tucker Carlson. https://t.co/B6vLcaDvyb

All Republicans are exactly the same and don’t you dare tell me there are any good ones https://t.co/RRU6R95Kol

When reached for comment on the deleted tweet, Editor-In-Chief Geoffrey Ingersoll had the following to say when asked who made the image and tweeted it out and who decided to delete it.

“I have no idea,” he wrote in an email to Contemptor. “They probably deleted it because the starter pack is missing things like a tripod, extra large breast implants, a stripper pole, and maybe a picture of Ron Jeremy.”