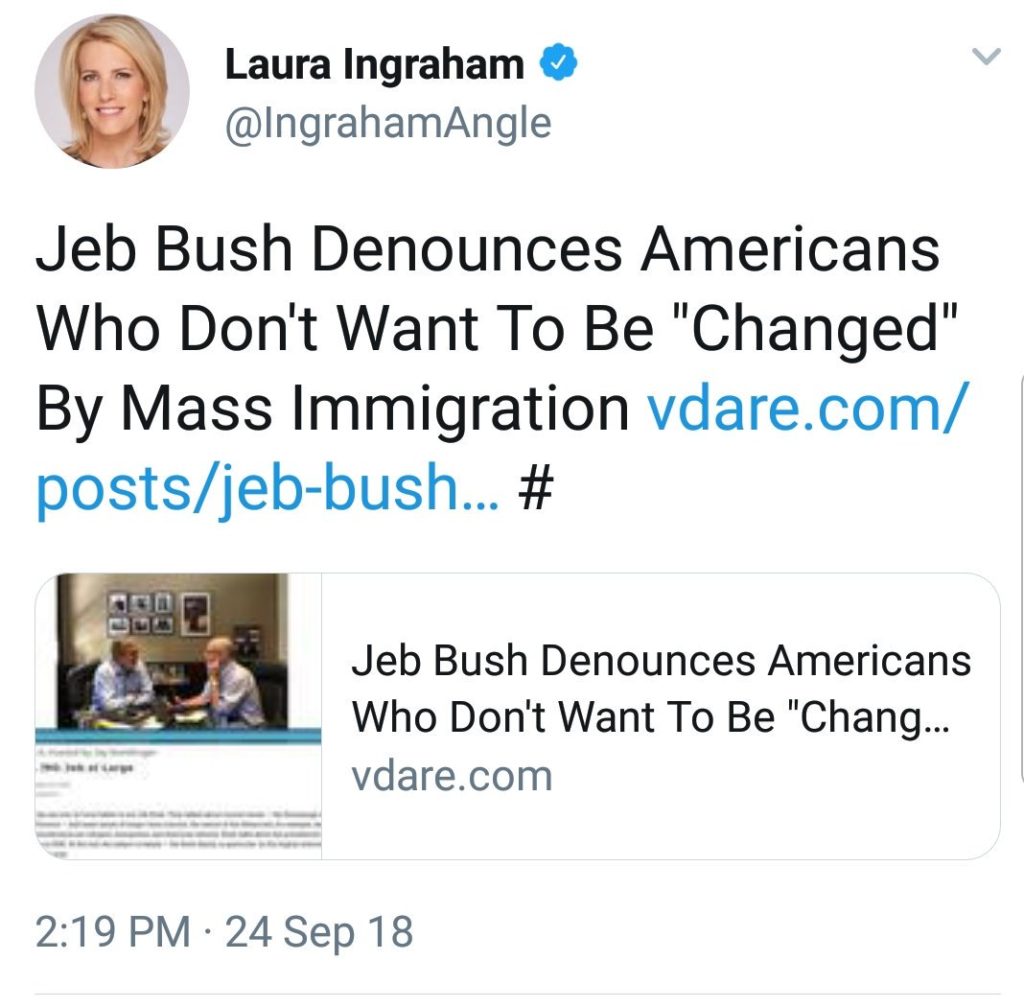 The article Ingraham linked to, ‘Jeb Bush Denounces American’s Who Don’t Want To Be “Changed By Mass Immigration,’ slammed the former Florida governor and one-time presidential candidate for criticizing anti-immigrant advocates who want to restrict legal immigration. Here’s a passage from that post:

The way Jeb! and other Beltway Right types view demography shows their contempt for the historic American nation. It is appropriate to talk about “demography” when it comes to the need for more workers, i.e. the need to keep down wages via a glut in the labor market. However, if we talk about demography in terms of race, culture, and the effects of different population groups on the electorate, that becomes “vitriol.”

After a number of folks on Twitter noted that Ingraham had shared a link from an organization that the Southern Poverty Law Center has designated a hate group and was founded by alt-right leader Peter Brimelow, the Fox host deleted the tweet and offered up an explanation.

A short while ago I mistakenly tweeted a link to a website that I in no way condone—only wished to highlight NRO podcast intvw w/ Jeb Bush on immigration. Tweet deleted. Thanks for the heads up!

“A short while ago I mistakenly tweeted a link to a website that I in no way condone—only wished to highlight NRO podcast intvw w/ Jeb Bush on immigration,” she wrote. “Tweet deleted. Thanks for the heads up!”

She then posted a link to the National Review interview while seemingly expressing a positive reaction to it, stating that Bush talked about “America’s major demographic changes, need for better civics education & possibility of self-funded Independent candidate for president.”

This is the intvw with @JebBush — he talks abt America’s major demographic changes, need for better civics education & possibility of self-funded Independent candidate for president. https://t.co/CwvDERYLVV

Last month, Ingraham weathered accusations of racism and white nationalism over her on-air segment in which she decried the shifting demographics of the country and claimed that “the America we know and love doesn’t exist anymore.” She’s also taken heat over past remarks in which she likened migrant child detention camps to “summer camps” and called on NBA superstar LeBron James to “shut up and dribble” in response to his political commentary.