Saturday morning, CBS News tweeted out a straight news story on Texas Democratic Senate candidate Beto O’Rourke’s defense of NFL players protesting racial injustice and police brutality during the playing of the national anthem before games. Just one little problem — the headline claimed that NFL players were actually protesting the anthem and O’Rourke was claiming there was “nothing more American” than that. 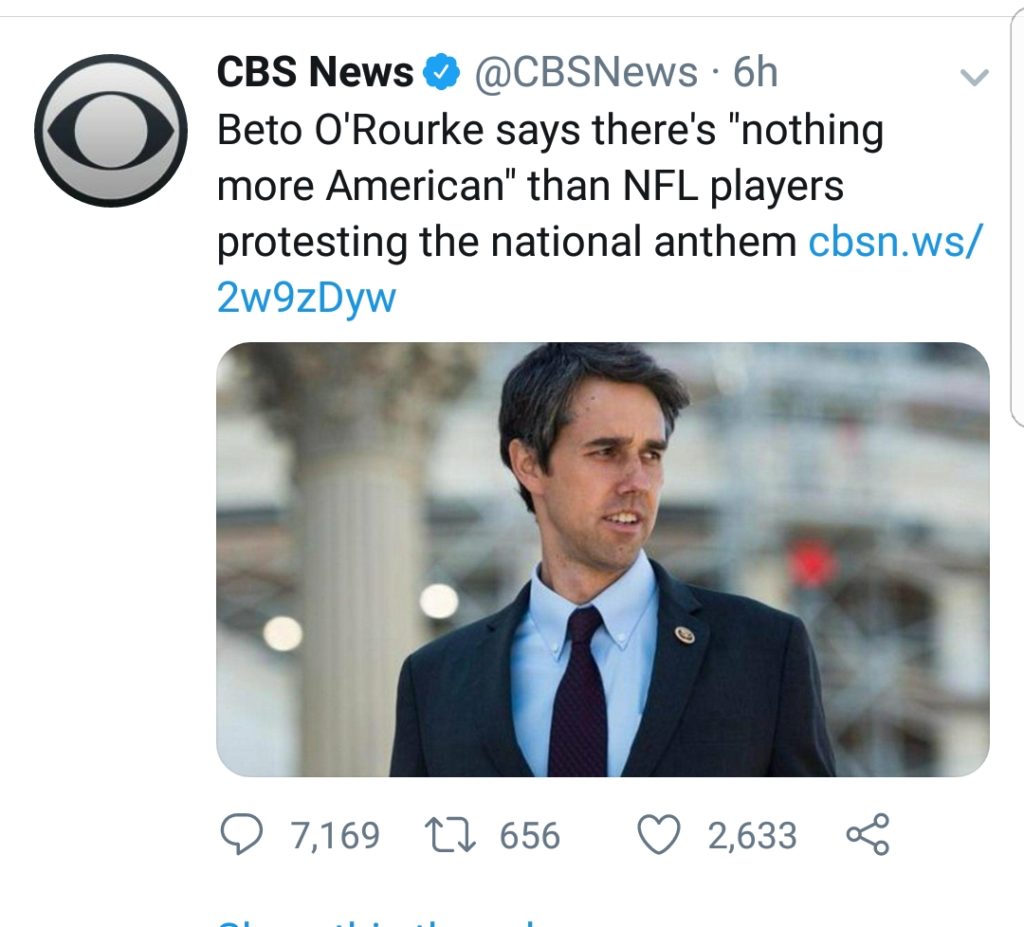 Well, it didn’t take long for that erroneous framing to get called out online. I mean, in the screenshot of the tweet above, one can already see how bad The Ratio was for CBS.

Who in the middle of the night decided, "Guess I'll post a wildly inflammatory headline?" https://t.co/MbRy9dgFlO

There, fixed your headline @CBSNews. https://t.co/CFvTCtD1cj

This is very bad, @CBSNews. He never said this. This is very irresponsible journalism. I hope @BetoORourke's team and the @TheDemocrats see this. You are directly misinforming the public, thus swaying public opinion. https://t.co/kpJIMPAwWt

Someone should be disciplined for malfeasance at @CBS that is most certainly NOT what @BetoORourke said. Watch the video and correct. Protesting is the original American sport. See Boston Tea Parry. Protesting racism is something we all must do. https://t.co/QEDzJtXHfM

A gross distortion of what @BetoORourke actually said. I won’t accept that you’re this dense. What a crass ploy… https://t.co/HRiivi2rXC

I’m trying to figure out how you got this wrong @CBSNews, when @BetoORourke says IN THE VIDEO YOU ARE DISCUSSING that the protests are NOT about the anthem. Unless, of course, you’re intentionally misleading folks because you have an agenda. Or your journalism sucks. Which is it? https://t.co/l8xWOgXrQh

This is not what Beto O'Rourke said. It's what Ted Cruz said Beto O'Rourke said. If mainstream journalism had working norms for dealing with bad faith, the story would be that Cruz lied about Beto. Instead, CBS reprints Cruz's lie as though it were true. https://t.co/vOaewTPaBI

Eventually, CBS News changed the headline of the piece online and added the following editor’s note:

The network also sent out a series of tweets explaining the correction while leaving the original tweet up on the timeline.

The author of the piece also took to Twitter to state that the article was published with a “misleading headline” while linking to the newly-titled post.

Yesterday, I wrote a story which had a misleading headline. Here is the story with the updated headline: Beto O'Rourke says “nothing more American” than to stand up or take a knee for your rights https://t.co/egsGzGMEMX