Whistleblower Edward Snowden, who has been hiding out in Russia since 2013 after leaking national security secrets, seems to be riding a renewed wave of interest in his story sparked by the release of Oliver Stone’s movie Snowden this week.

In a The Guardian exclusive via video link, Snowden asked President Obama for a pardon on moral and ethical grounds for his acts of espionage, which could land him in jail for up to 30 years if he were to return and face charges on US soil.

Snowden claimed that his actions, which caused him to be called everything from hero to traitor, were morally right for revealing how invasive NSA surveillance became on US and British citizens under changes by George W. Bush after 9/11.

Since Snowden exposed massive amounts of classified data to the world, he claimed the world has been better off, therefore he should be exonerated.

“I think when people look at the calculations of benefit, it is clear that in the wake of 2013 the laws of our nation changed. The [US] Congress, the courts and the president all changed their policies as a result of these disclosures. At the same time there has never been any public evidence that any individual came to harm as a result,” said Snowden.

But Eric Holder, Obama’s former US Attorney General, who led the investigation into Snowden’s document leak, did not agree that his actions were without consequences and didn’t harm “American interests.”

“I know there are ways in which certain of our agents were put at risk, relationships with other countries were harmed, our ability to keep the American people safe was compromised,” Holder told David Axelrod in a podcast not long ago.

“There were all kinds of re-dos that had to be put in place as a result of what he did, and while those things were being done, we were blind in certain really critical areas. So what he did was not without consequence.”

Holder did say that Snowden’s actions raised an important debate on the subject of personal privacy, but wouldn’t go so far as to say he shouldn’t be punished for actions that in the minds of many could have been handled through legal channels.

During a promotional appearance for Snowden Tuesday on the Today show, actor Joseph Gordon-Levitt, who portrays the exiled informant, compared Snowden’s act of espionage to Rosa Parks and her willingness to break the law by sitting in the front of the bus.

Gordon-Levitt, who met with Snowden in Russia for a brief time to prepare for his role, felt that Parks’ broke a law that has been viewed by history as an important and necessary defiance for social change.

During his final months as president, Obama has been in a charitable mood regarding pardons and freeing prisoners held on minor drug violations, but the fact remains whether or not he will exonerate a controversial person who admits he broke the law, but sees it as a benefit to society.

If Obama chooses to do so, it will be celebrated by some and denigrated by others, which represents the epitome of American freedom.

What do you think? 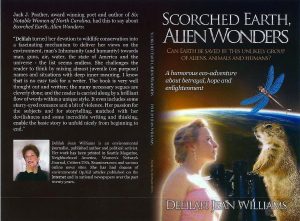 what aliens would find if they visited Earth a hundred years from now, you’re going to love this book. But there’s more to the earthly adventures of this group of space-traveling prairie dog aliens than just seeing what a reckless human race did to their planet.  Just like people, these interstellar voyagers know a thing or two about love, laughter, betrayal and greed that can wreak destruction on a planetary scale. Can the aliens save what’s left of the doomed world and guide humanity back to a healthy relationship with their planet? Or is it too late? The answer is inside the pages of Scorched Earth, Alien Wonders… Amazon.com.