#BirdieSanders: Could The Sanders Sparrow Be The Harbinger Of A Third Party At Last?

The tiny little bird that alighted upon Bernie Sanders’ podium at his Portland rally yesterday has turned into a full-on viral phenomenon in the Bernie-verse and beyond. Interpretations of the symbolism of the bird have ranged from styling Bernie as the only candidate who is honest and innocent enough to attract woodland creatures á la Snow White: 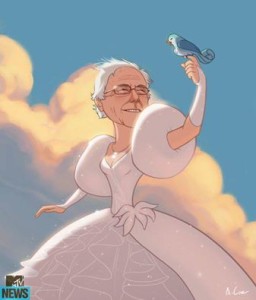 …to Native American totem symbolism, in which the sparrow “became symbolic of the triumph after a time of long suffering”. This one goes into a little additional historical context, which many in the Bernie camp have pointed out as particularly apropos:

“This tiny little bird who seems so insignificant today, was once a symbol of household divinities in Britain and in the Middle Ages was a symbol of the peasants of the lower classes in all of Europe who were in a state of helplessness under the power of the Lords over them.  These peasants loved to tell and hear stories of how a small little bird like the sparrow would triumph over enemies like a wolf, bear or eagle that symbolized the different houses of the nobility.”

More religiously inclined Berniecrats have given it a “sign from God” treatment, with Christians comparing Bernie to Noah on the ark. Sanders commented hyperbolically that the bird was “Actually a dove, asking us for World peace” he concluded; “No more wars!” referencing the dove that brought the olive branch signifying peace to the biblical figure. The Jews for Bernie Facebook page noted alongside the video that “This is the kind of thing that happens in a Hasidic parable”.

But all of the symbol-seeking and buzz around this bird, there is one very interesting development: That the large numbers of independent and progressive voters who, previously diffusely milling outside of the democrat/republican political dichotomy, have found a symbol in Senator Sanders around which to rally have similarly found a new party icon in this tiny little bird. Memes such as these are beginning to fly around with frequency (pun certainly intended): 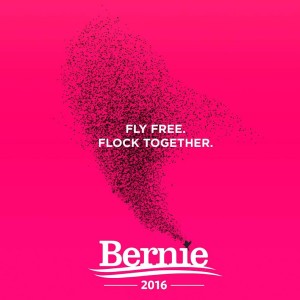 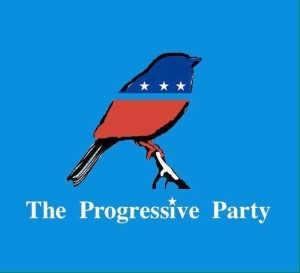 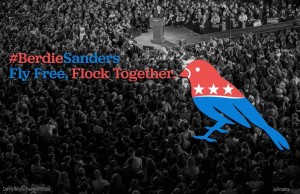 Those suggesting the party of the “new left” or “progressive party” should take the symbol of the sparrow seem to favor it for its connotations of humility, because it is a meek little creature which nevertheless flies circles around larger, slower and more obstinate animals, and of course because birds, as a flighted creature, have always been associated with freedom  Smaller birds in particular have the ability to flock and fly in great numbers when necessary for survival, another characteristic seemingly embraced by the many Americans who find that they were democratic socialists all along. There is the ever-present question commonly asked by supporters of the Sanders campaign as well:  What will become of this ‘political revolution’ should the DNC successfully block his nomination in favor of Clinton? Many, if not most, Sanders supporters are well past the point of supporting a Democrat ever again, making a third party emergence on the left not implausible.

Whether that bird (and the senator she chose to visit) will give the United States a third party is yet to be seen of course, but it’s hard to deny one kind of symbolism that little sparrow portends: in our world of fluctuation and chaos —  and particularly in an election season — something very small and random can definitely make a YUUGE impact.