While Fox News and NBC predictably turned to wannabe Muslim banner Donald Trump for his reaction to the heinous terror attacks that rocked Brussels Tuesday morning, his closest GOP opponent decided that he needed to get to the right of The Donald on this particular issue. Therefore, in a blatantly callous and opportunistic move to rally hardcore conservatives ahead of Tuesday’s Utah and Arizona primaries, Ted Cruz released the following statement: 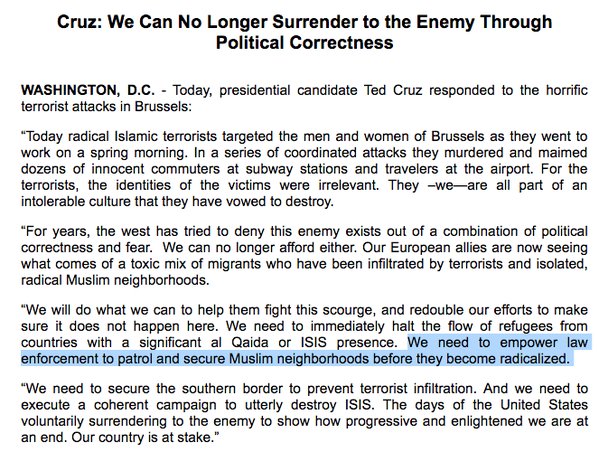 Yep, the highlighted part reads: “We need to empower law enforcement to patrol and secure Muslim neighborhoods before they become radicalized.”

So, Mr. Religious Freedom now wants members of a certain religious faith to be marginalized, profiled and eventually rounded up? Isn’t that going against his ‘principles’? On top of that, how exactly is creating military zones in Muslim neighborhoods going to prevent radicalization? How is dehumanizing a section of the population going to lead to less anger and despair?

The thing is, Cruz is every bit as craven as Trump. He is nothing more than an ambitious carnival barker who will throw any and every one under the bus to reach the mountaintop of power. He is as dangerous a man as you’ll ever see, perhaps more so than Trump. The man is an oily snake who will gladly lead this country down the pit of despair, as long as he’s the one sitting on the throne.