Rush Limbaugh conspiracy theories are my absolute favorite conspiracy theories. On Monday’s broadcast of The Rush Limbaugh Show, famed Oxycontin addict Rush Limbaugh took to the airwaves to posit a theory that a recent viral photograph showing a young gay man holding his head in sadness over his future was really a fake created by Hillary Clinton’s campaign to help drum up support from progressive voters. Per Limbaugh, the photo, taken by renowned New York photographer Brandon Stanton for his popular Humans of New York project, is as “phony as it gets” and it is hard to believe that Clinton commented on it so soon after it had been posted to Facebook without her being involved somehow.

It would appear that Limbaugh is unfamiliar with the ongoing project and blog that Stanton created some time ago. Stanton started Humans of New York in 2010 and there are now over 14,000,000 people who like the site’s Facebook page and another 303,000 followers on Twitter. He’s also published numerous books of his photographs. While it might be difficult for Limbaugh to believe that one of Stanton’s pictures can go viral in a short amount of time, considering his social media exposure, it would take very little time for a powerful photo to spread like wildfire.

In this instance, Stanton took a shot of a young LGBT youth and then provided a caption with it when he posted it to Facebook on Friday. Per Stanton, the kid said, “I’m homosexual and I’m afraid about what my future will be and that people won’t like me.” 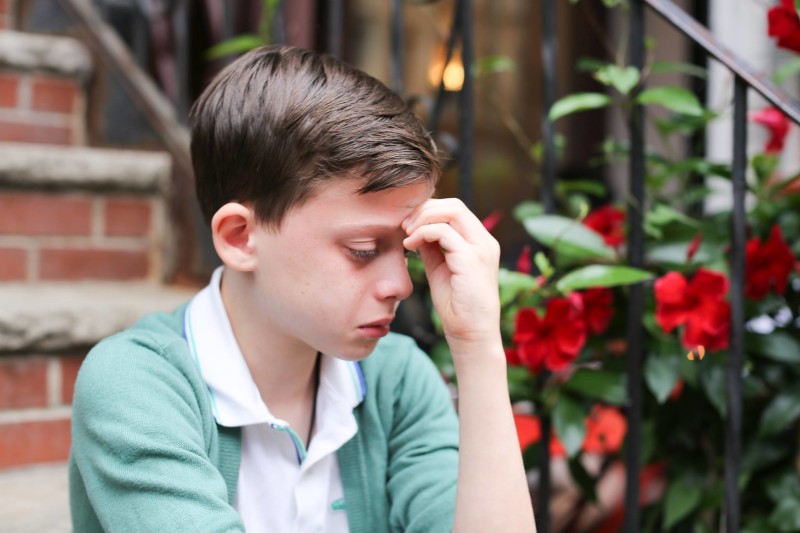 Anyway, due to the former First Lady commenting on the Facebook pic on Friday, El Rushbo smelled something rotten in the state of Denmark. Per the conservative gasbag, not only was he certain that the picture was a fake and Clinton was behind it, but he was also pretty sure the kid was the same one featured in another viral photo of a gay youth.

From the show’s transcript:

“The boy, who is not named in the photo, is shown frowning and holding his head in his hands while sitting on a stoop,” on his street in New York. “‘I’m homosexual, and I’m afraid about what my future will be and that people won’t like me,’ he said, according to the caption.” Now, this picture just happened to be taken. We are supposed to believe that a photographer was just randomly walking the streets of New York, and just happened to see an eight-year-old boy sitting on his front stoop crying. So the photographer, being a good photojournalist, said, “A-ha! I see a story here. Why, there’s an eight-year-old crying!”

So he snaps the picture, and then the photographer walked up to the kid, “Why are you crying, young man?” and that’s when he told the photographer that he was crying because he’s gay.  Of course, then Mrs. Clinton rides to the rescue here offering moral support to this distraught eight-year-old who shared his anxiety in the photograph with this guy that just happened to be walking down the right street at the right time in New York to take the right picture.

“Two hours after the picture was posted, Mrs. Clinton typed out some words of encouragement and signed her comment ‘H’ … ‘Prediction from a grown-up: Your future is going to be amazing,’ she wrote. ‘You will surprise yourself with what you’re capable of and the incredible things you go on to do. Find the people who love and believe in you — there will be lots of them.'” Now, I’m sorry, folks, but I am… Where the Clintons are concerned, there are no coincidences with the Clintons. There just aren’t any. I feel very confident and safe speculating that this whole thing is as phony as it gets.

We’re supposed to believe that a photographer walking the streets of New York City sees this kid crying on his stoop, takes his picture, and then the kid says to the photographer, “Yeah, I’m crying because I’m gay and I’m really worried about my future and I don’t think I’m going to be loved and it’s going to be really hard out there.” The kid looks like he’s eight or nine. You know what the kid looks like? He looks like the kid that was in the gay pride parade last week.

In the picture we showed, his mom had him proudly dressed up in some kind of rainbow-colored drag queen getup with a Roman crown of whatever on his head. This kid looks exactly like that kid. I’m not saying it’s the same kid. I’m just saying that’s what this eight-year-old looks like. That was in Yahoo! Parenting. Anyway, it’s just a little too convenient with Hillary in some trouble out there with the “progressives” because of Bernie Sanders.

It appears that Limbaugh has cracked the code! Nevermind that a number of other well-known and famous people had also commented on the Facebook post shortly after it went up, just like Hillary. Set aside the notion that a respected photographer with millions of followers on social media, a long-standing project centering on his city, and a stellar reputation would have to allow himself to be involved in a hoax. The fact is that Rush knows in his heart of hearts that due to the fact that Hillary Clinton is a low-down dirty dog, any and everything she is involved with has to be fake and for pure political gain. Including this!

Don’t let the Drive-Bys or feminazis tell you any different. Nuh-uh. This shit is totally a phony because Rush says so. His theories always turn out to be completely correct.