Yes, this is real.

At the top of Sunday morning’s broadcast of Fox & Friends, the curvy couch crew discussed President Trump’s announcement that he was cutting aid to Honduras, El Salvador, and Guatemala due to the surge of asylum-seekers making their way to the American southern border. Trump is accusing all three countries of purposely setting up migrant caravans and sending them to the United States. 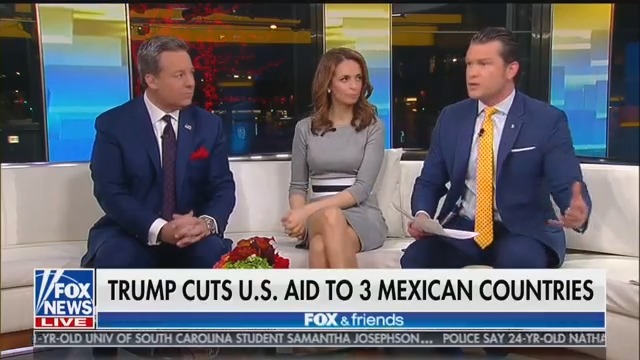 After roughly 30 seconds, the chyron was pulled down and replaced with one reading “Trump Threatens To Close Southern Border.” Later in the program, the F&F crew issued an on-air correction of the inaccurate graphic, saying they “want to be clear the funding is being cut off to three Central American countries.”

Fox corrects:"We want to clarify and correct something that happened earlier in the show. We had an inaccurate graphic on screen…we just want to be clear the funding is being cut off to three Central American countries. We apologize for the error it never should have happened." pic.twitter.com/oYktCeVYMd

“We apologize for the error — it never should have happened,” host Ed Henry said.