All For a LARP: QAnon Hits the Bestseller List

People sometimes ask me, “What will it take for QAnon followers to realize they’ve been duped?”

The truthful answer is: “I don’t know.”

Everyone has their own reasons for believing or not believing in something. But, generally, I tend to assume most will never realize they’ve been taken for a ride. People just don’t abandon a belief system because the evidence demands it. When someone subscribes to some sort of evidence-free extremism, it’s probably because it fulfills some sort of emotional need they aren’t getting elsewhere.

The classic text on cognitive dissonance, When Prophecy Fails, is still a useful guide to understand what happens when people are confronted with disconfirming evidence. Rather than adjusting their worldview, people who face being proven wrong redouble their efforts to spread their message. In reaction to the world refusing to confirm their cherished beliefs, people might, for example, spread leaflets in order to beat back a sense of doubt.

Someone in West L.A. has scattered these all around one of my running routes. @nezumi_ningen @DavidNeiwert pic.twitter.com/PRKydh8qoW

But the uncertainty is part of what makes following the QAnon community enjoyable, even when it’s sad or concerning. It’s bizarre, and nobody quite knows what’s going to happen next. I can only say what has happened recently, and maybe make an educated guess from there.

Here’s what has been happening in QAnon for the past few weeks.

Q commonly singles out individual celebrities for harassment campaigns on Twitter, even when their background check is otherwise squeaky clean. Q will take crude jokes or jokes that are taken out of context, and makes the Q flock believe that they are secretly confessions of depraved acts. Previous targets have included Bill Maher and Rainn Wilson. Whenever someone is singled out, the following events are always predictable. Q links to a few tweets, QAnon people angrily tweet at the targeted celebrities for a day or two until they get bored, and then move on to something else. These campaigns don’t accomplish anything. But I imagine they find angrily tweeting satisfying on some level.

The most recent target was Patton Oswalt, who was targeted for two jokes made on Twitter from 2013. 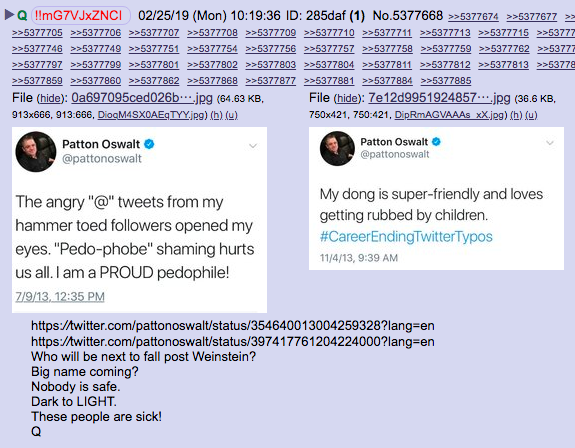 Per usual, the outrage was not based on anything substantial, unless you consider poor reading comprehension “substantial.” This is the first tweet that inspired a round of people tweeting “Q sent me.”

The angry “@” tweets from my hammer toed followers opened my eyes. “Pedo-phobe” shaming hurts us all. I am a PROUD pedophile!

My dong is super-friendly and loves getting rubbed by children. #CareerEndingTwitterTypos

The outrage over this tweet is even more baffling. The hashtag “#CareerEndingTwitterTypos” even makes it clear the kind of joke Oswalt is making this tweet. Obviously, the joke is that Oswalt mistakenly typed “dong” when he intended to type “dog” in the tweet. Simple.

However, the fact that there was nothing actually offensive about the tweets didn’t stop QAnon followers from sending confused, deranged tweets en masse.

I dont wanna tell you to do anything dangerous, I just want you to see how quickly you can get from the top of a skyscraper to the dirt and rats in the gutter below. Preferably face first.

As expected, they moved on quickly, having only succeeded in being temporarily annoying.

This is why I love @MeredthSalenger. I’ve just been muting the QAnon dipshits. Get yerself someone funny and feisty, my friends. https://t.co/ejZNyB7dMB

The whole incident is a tidy lesson in how the QAnon community is big on rage and tweeting at people, but not nearly as big on understanding.

QAnon made national news recently thanks to the success of a brand new paperback book. The tome, QAnon: An Invitation The Great Awakening proved to be a success on Amazon shortly after it released on Amazon. It peaked at #2, right behind the self-help book Girl: Stop Apologizing.

New from me: A Qanon book that alleges the US government created both AIDS and Monsters Inc. (as a tutorial on how to do eat children) is up to No. 56 of all books purchased.

It’s in recommendation carousels. And Amazon will not comment on any of this.https://t.co/2HjQrlWiW8

But what should have been a moment of celebration for the QAnon community actually led to infighting. A large section of QAnon followers on Twitter expressed resentment at the authors of the book. To these purists, it’s wrong to profit from Q “research” and hold yourself up as an authority. QAnon, they imagine, is a populist movement, and anyone who tries to make themselves part of a kind of “QAnon establishment” should be called out.

A certain group of QAnon believers resent the authors of the QAnon book for framing themselves as “authorities” on Q. And they’re appealing to particular passages in Q Drops to justify rebuking prominent Q figures.

So there’s essentially a debate over QAnon orthodoxy going on. pic.twitter.com/JSHbKP4Cph

Personally, I took internal conflict as another sign that QAnon followers are dug in and are here to stay. Some moved on from spreading their message or debating outsiders. To them, the question of Q’s validity is settled, so they’re turning inwards to fight among themselves.

QAnon earned its most prominent advocate so far after Markus Persson, better known as “Notch,” said “Q is legit” in a tweet.

The 39-year-old billionaire went on to clarify his tweet. He didn’t explicitly endorse the idea that Q is actually military intelligence, or that there are thousands who will be arrested and sent to Gitmo, or any of the other basic beliefs held within the QAnon community. But rather, he endorsed the idea that Q has “gotten people digging real deep.”

What do you mean by real? Someone is definitely posting under that name, and whoever it is had gotten people digging real deep to uncover the truth.
And that part IS legit. It doesn’t matter who Q is, of if he’s “real” https://t.co/Gi8wh9ldjG

Even though it appears to be a tepid endorsement of Q, the idea that the QAnon community has produced any worthwhile research is still not true.

Q went on to include a link to a collection of Q drops in his Twitter bio and endorsed Praying Medic, one of the most prominent and least scrupulous QAnon grifters.

Notch watch: The billionaire Minecraft creator has a link to a QAnon site in his Twitter bio and is promoting YouTube videos by QAnon “decoder” Praying Medic.

Praying Medic may be the most vile QAnon grifter. He preys on people with illnesses by selling a “divine healing” class. pic.twitter.com/uM07VcQKwp

The endorsement from Notch, who has worldwide fame among young gamers and millions of Twitter followers, may prove to be meaningful for the QAnon community’s prominence. It’s a bit like Scientology nabbing Tom Cruise. And unless Cruise himself converts to QAnon, Notch will probably be the community’s most prominent supporter moving forward.