Speaking to former John McCain adviser Mike Murphy Wednesday afternoon, MSNBC anchor Andrea Mitchell asked him if he was surprised to see this “new maverick shift” coming from Romney. The two then talked about which GOP senators would be willing to stand up to President Trump now that critics such as McCain, Jeff Flake, and Bob Corker are no longer in the Senate.

This then led to MSNBC showing the graphic, which also noted that Corker and Flake were “Departing Senate Mavericks”: 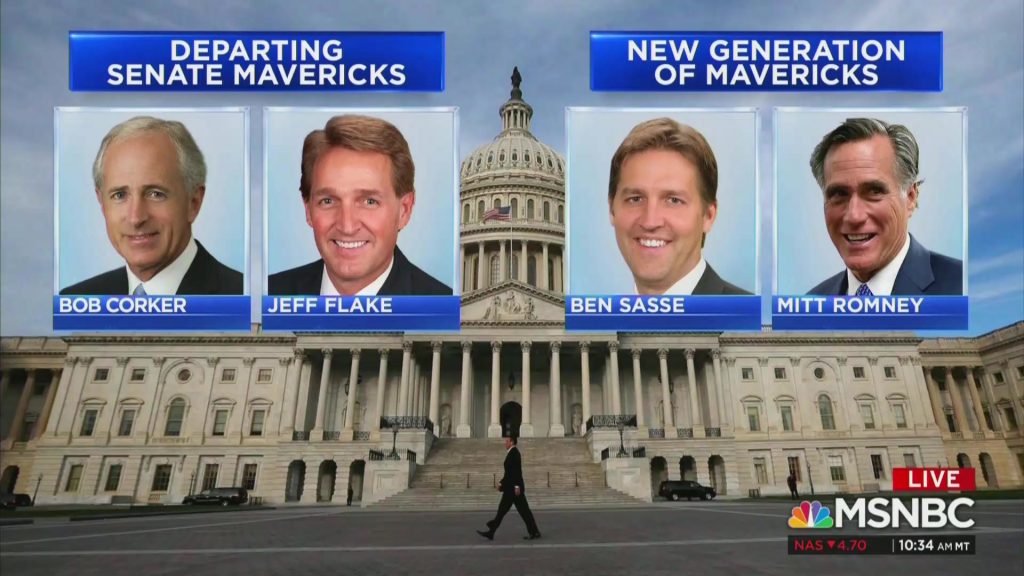 Well, it didn’t take long for MSNBC to take heat for describing milquetoast conservatives as “mavericks,” especially from liberals and progressives.

I mean this is preposterous pic.twitter.com/eRHVc6jv8U

MSNBC's "new generation of mavericks" in the Senate is composed of:

-a twice-failed presidential candidate who's been on the national scene for 10+ years, and

-an incumbent senator entering the 4th year of his term https://t.co/dodOlY0ABa pic.twitter.com/tBaBltUbqe

Sasse voted with the Administration 87 percent of the time. Corker 92%. If these are the mavericks, MSNBC, hate to see sycophants https://t.co/5wtmmhcc7z

HuffPost’s Yashar Ali wanted to know who was responsible for the graphic.

Who is responsible for this? pic.twitter.com/F3yIvbG6wl

Yashar’s tweet caused Meghan McCain to respond and claim that her father was the “only real maverick.”

The only real maverick was my father

Gizmodo’s Tom McKay put together some parody versions of MSNBC’s graphic, some of which were truly inspired.

You can watch the full clip of Mitchell’s interview with Murphy above, via MSNBC.