An 8chan-sourced doxxing accusation against a Congresswoman Maxine Waters staffer spread through Twitter and right-wing media before it was denied by Waters in a statement. The accusation originated because of a website post by staffer Kathleen Sengstock and a misunderstanding of how IP addresses work. Waters’ statement claims that the matter was investigated by the U.S. Capitol Police and an internal IT specialist.

The claim originated on an 8chan /pol/ thread titled “Graham Goes Ham: Thread 2 – Doxed Edition.” On Thursday, the 8chan anons were attempting to find information that might uncover the identity of the person who doxxed Republican Senators. That same day, during Supreme Court nominee Brett Kavanaugh’s testimony, the personal information of several Republican Senators on the Judiciary Committee was published on Wikipedia. This information included home addresses and personal phone numbers. The edits appeared to come from a computer on Capitol Hill, based on IP addressees tracked by Wikipedia.

One anon in the thread, believing they had found incriminating information, linked to a post on the Monocacy Canoe Club messageboard.

The linked post was published by Waters staffer Kathleen Sengstock. The message listed an IP address that matches the IP address of the Wikipedia editor that doxxed the Senators’ information.

The faulty implication of the anon is that since the IP addresses match, Sengstock or possibly someone in Waters’ office, is responsible for the doxxing.

Another anon in the same thread pointed out a problem with that theory. Namely, Capitol Hill almost certainly uses a Network Address Translation (NAT) router, and therefore every device used by Congressional staff doesn’t have a unique and publicly routable IP address.

However, despite the fact the anons didn’t actually uncover any evidence that Sengstock was responsible, they rallied for a campaign to promote the baseless allegation. In a new thread, one 8chan anon said “Help spread this far and wide. Twitter/Faceberg/Reddit/4chan/anywhere you can. Turn up the heat.” 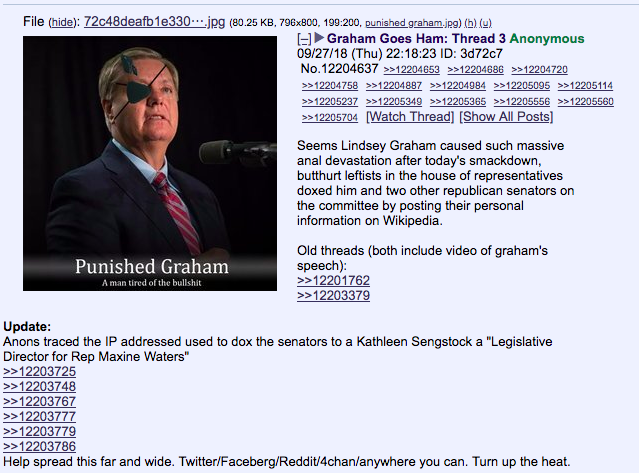 The allegation’s first significant appearance on Twitter came on Friday morning from David Reaboi, Vice President for Strategic Communications at the Center for Security Policy and contributor to The Federalist. Citing no source, Reaboi’s tweet said, “I’m hearing these IPs are traceable to a staffer in Maxine Waters’ Office.” 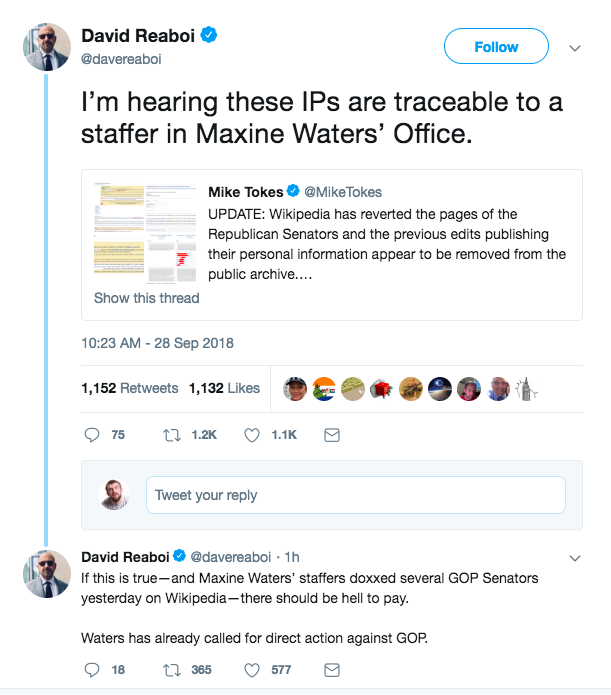 The claim was promoted by director and producer Robby Starbuck. 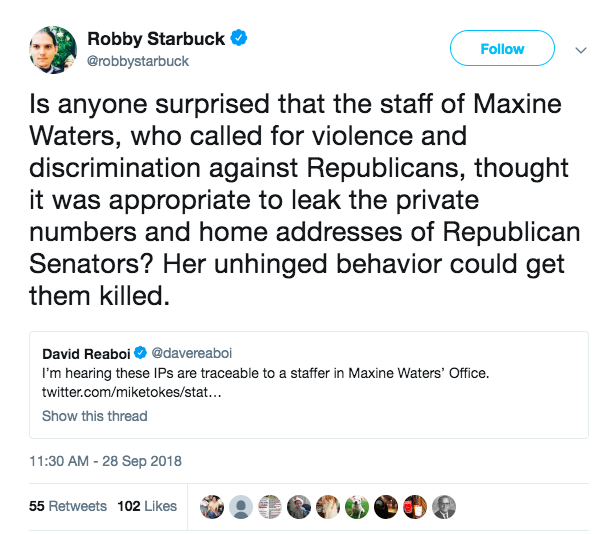 The claim was also promoted by writer and political strategist Derek Hunter. Hunter’s tweet stated, “I had no way to verify it, but given the standards of reporting this week, why not just say it anyway?” 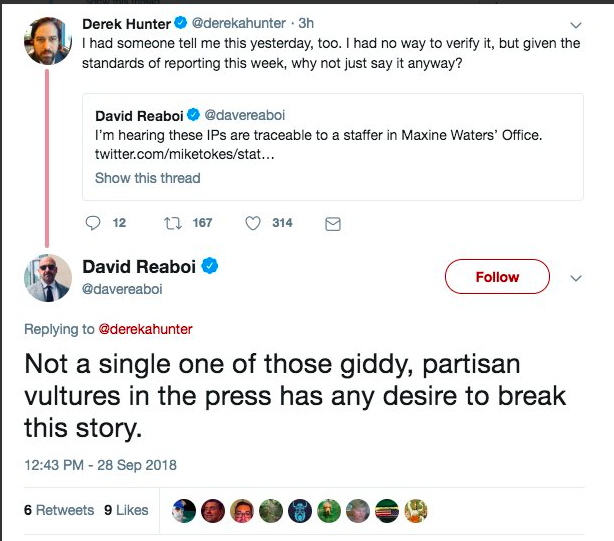 On Friday afternoon, the baseless allegation was promoted by Red Nation Rising, an account with over 142,000 followers. The cited source of the claim was “anons.” 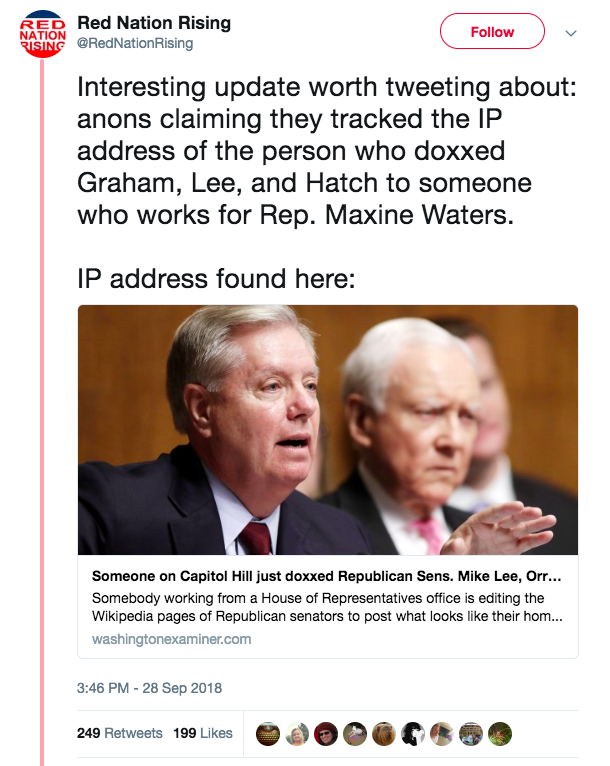 On Friday evening, an article promoting the baseless, 8chan-sourced allegation was published on The Gateway Pundit. 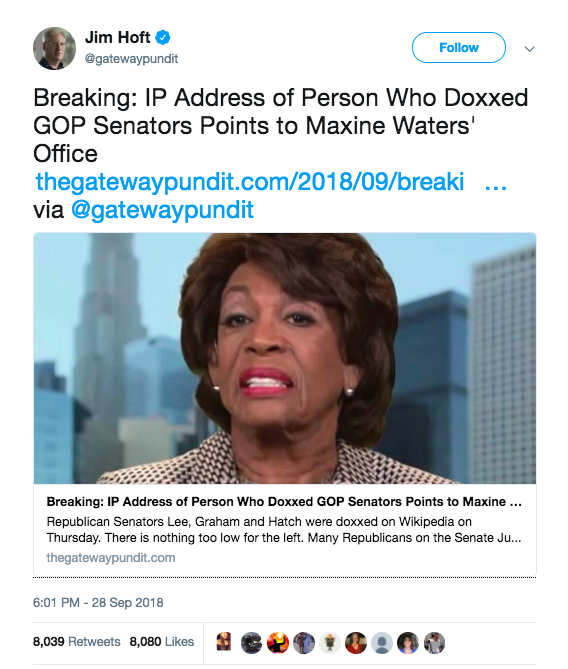 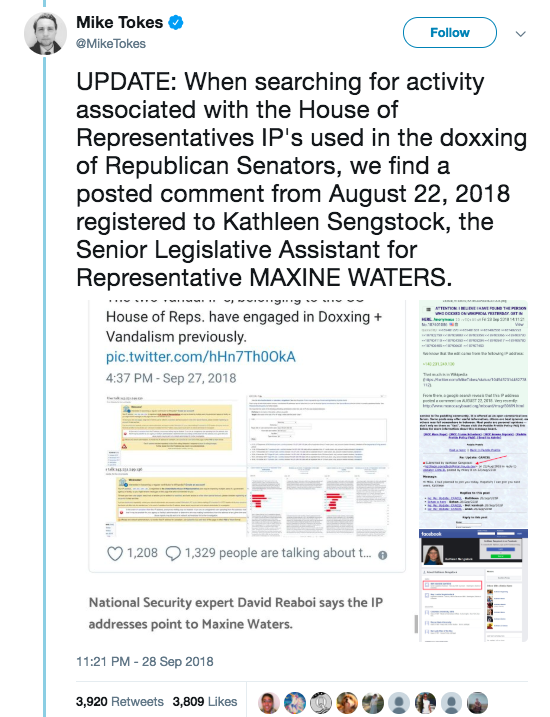 On Friday morning Guy Benson, editor of Townhall.com and a Fox News contributor, quote-tweeted Mike Tokes thread. The tweet said, “If this can be confirmed, charges should be filed.” 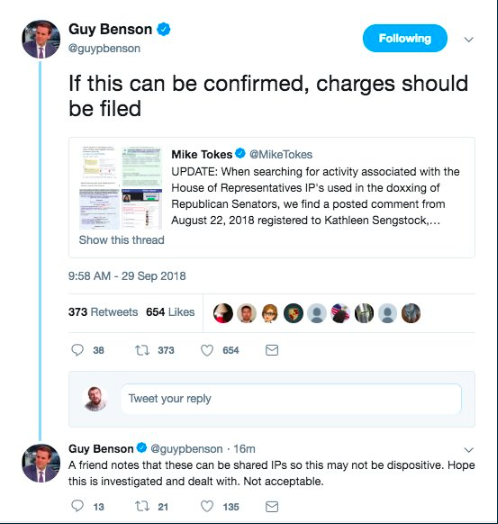 The Drudge Report Twitter account, which is followed by over one million accounts, tweeted a link to a Zero Hedge article about the baseless allegations. 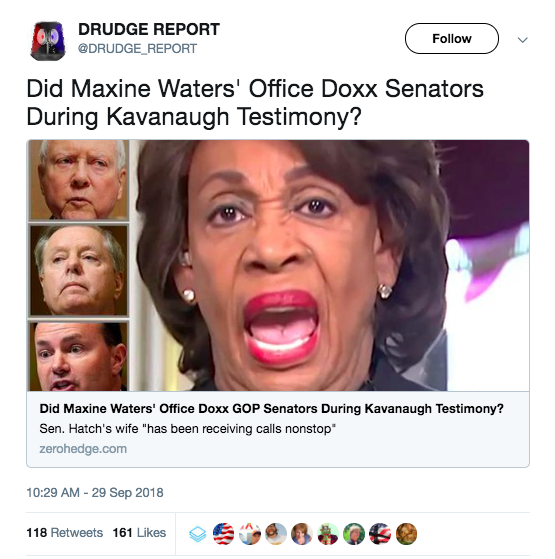 The conservative blog RedState also published an article about the baseless, 8chan-sourced allegations. 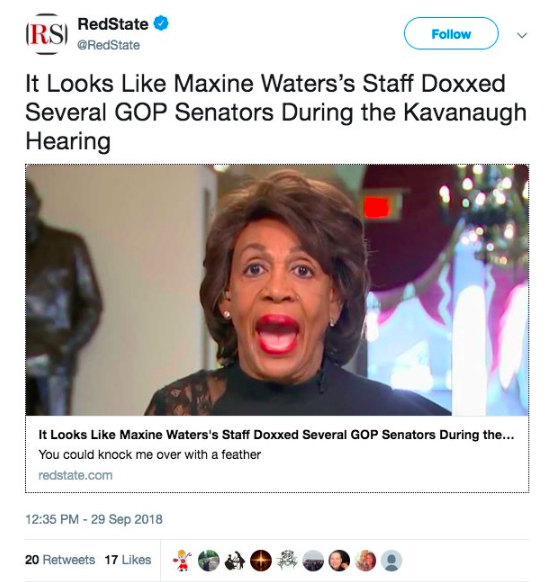 Less than an hour after the RedState article was published, Congresswoman Waters released a statement denying the allegations, which had first appeared on 8chan less than 48 hours earlier. The statement states, “The United States Capitol Police and our internal IT specialist have determined that the IP address in question does not belong to my office or anyone on my staff.”

The statement further claims that the named staffer’s “identity, personal information, and safety” were “compromised as a result of these fraudulent and false allegations.”

Please read my statement on false allegations regarding the leak of the personal information of U.S. Senators: pic.twitter.com/YBEekR6jBB