Yesterday, a 2016 photograph of Hillary Clinton went viral in QAnon, pro-Trump, and conservative communities on Twitter. The image was shared widely because of the false claim, which originated on 8chan, that a woman pictured behind Hillary Clinton is lawyer Debra Katz.

The photograph depicts Hillary Clinton exiting a building following a Hamptons fundraiser at a private home in Southampton, New York, on August 28, 2016. 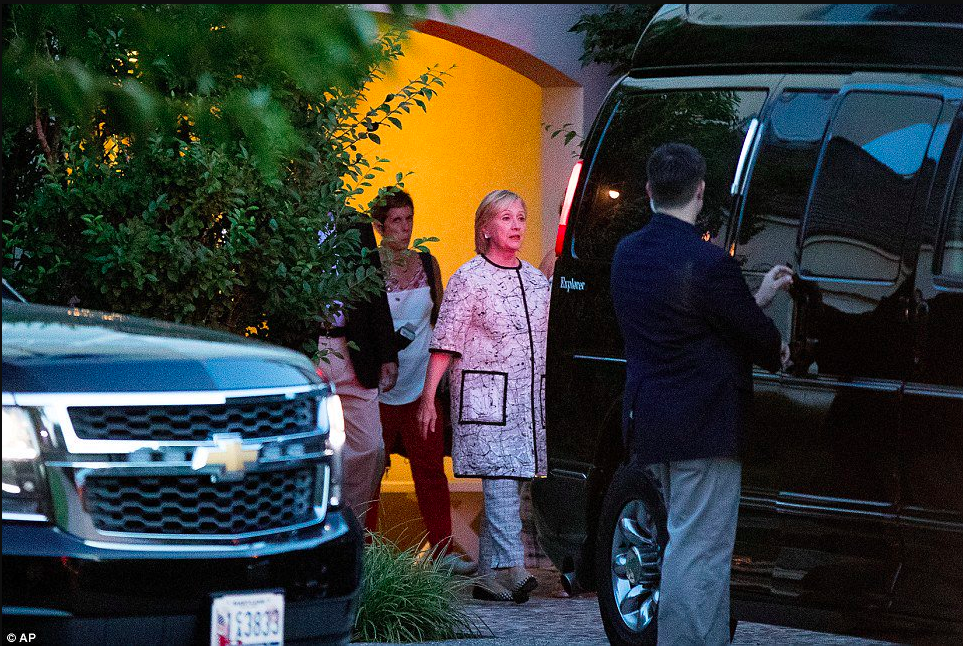 The woman pictured walking behind Clinton in the low-resolution image, as evidenced by the camera in her hands, is actually Clinton campaign photographer Barbara Kinney. Today Kinney confirmed to Media Matters for America that she is, in fact, the woman in the photograph.

The earliest known instance of someone promoting the false claim that the woman is Katz appeared on the 8chan imageboard. In the early morning of September 25, this composite image of was posted to the 8chan QAnon board /qresearch/. The image, which was added to a thread titled “Q Research General #4020 Baked Harvest Moon Edition,” pairs the 2016 image with a recent image of lawyer Debra Katz. Katz is representing Christine Blasey Ford, who has accused Supreme Court nominee Brett Kavanaugh of sexual assaulting her in 1982.

The caption of the image reads, “The plot thickens.”

The image falsely insinuates that the woman is Katz in order to bolster claims that Katz and Clinton have close ties, or are even working together in order to push allegations against Kavanaugh.

Within hours, the claim jumped to Twitter. At 10:30 A.M. the QAnon Twitter account Trump45Awesome tweeted the image with the caption, “Who is behind Hillary? This will make your blood boil.” As of this publication, the tweet has not been deleted and has been retweeted over 5,900 times. 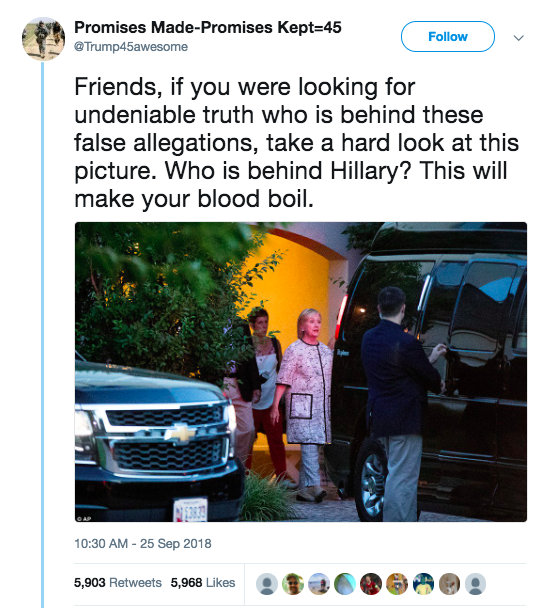 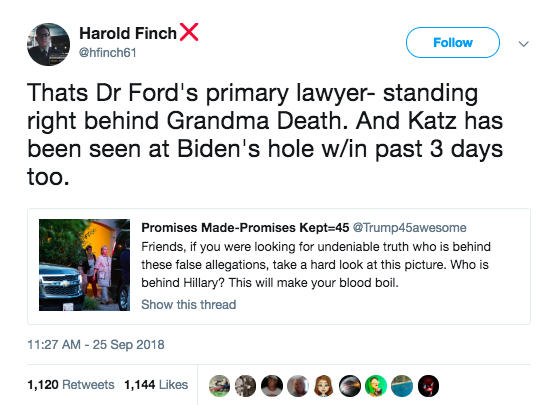 In the afternoon, the claim was tweeted by Jack Posobiec, who was quote tweeted by Michael Flynn Jr. Posobiec later deleted the original tweet. 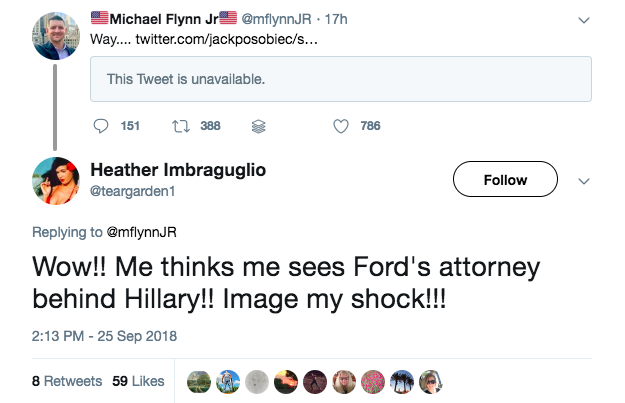 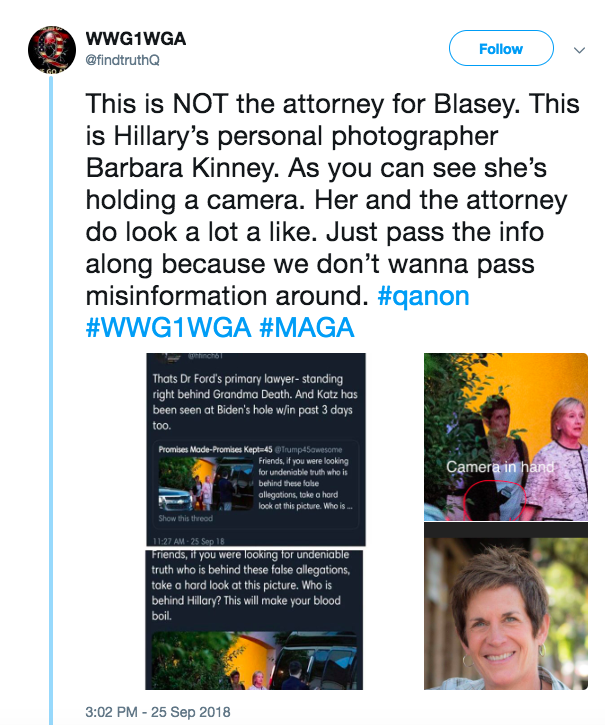 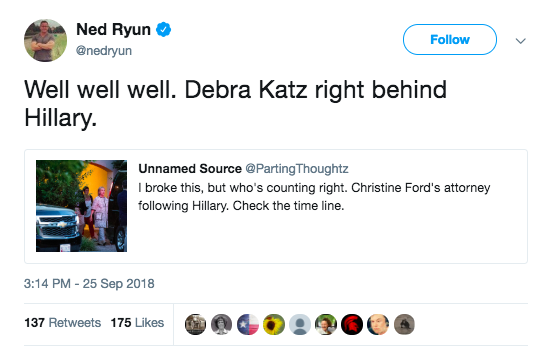 By the evening, the false claim was being promoted by Twitter accounts with very large audiences. At approximately 7:30 P.M. GayPatriot, an account with over 72,400 followers, tweeted the image with the false claim, “This is @DEbraKatzKMB — Christine Blasey Ford’s attorney — with @HillaryClinton.” That tweet was retweeted by “The Reagan Battalion,” an account with over 62,800 followers. 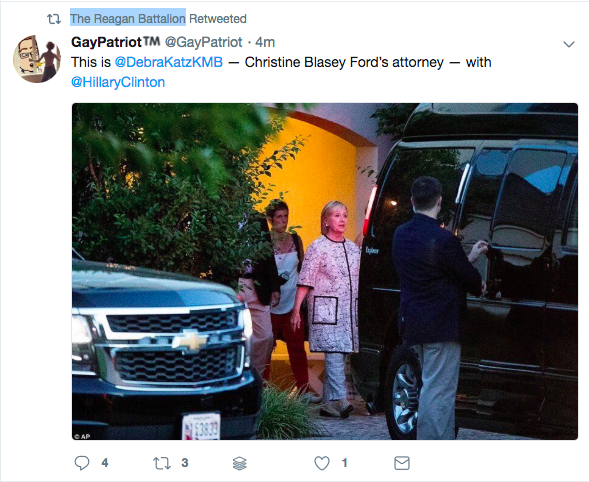 Shortly after being made aware that the claim is false, The Reagan Battalion removed the tweet from their timeline. 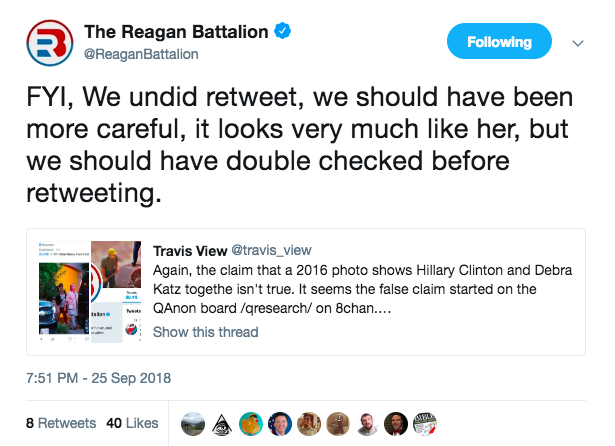 At 8:17 PM Erick Erickson, conservative blogger and radio host, promoted the false claim. He quote tweeted the viral tweet from Trump45Awesome with the comment “Is that actually Christine Blasey Ford’s lawyer behind Hillary Clinton? It looks like it.” 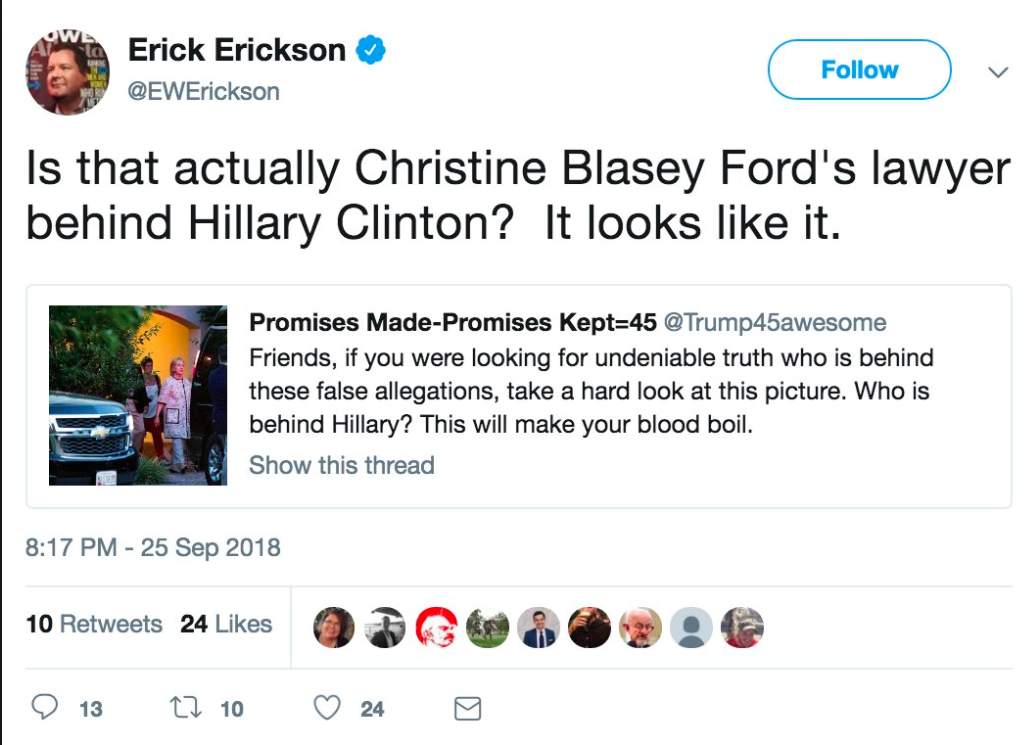 Minutes later, Erickson deleted the tweet after being informed that the woman pictured is not Katz. 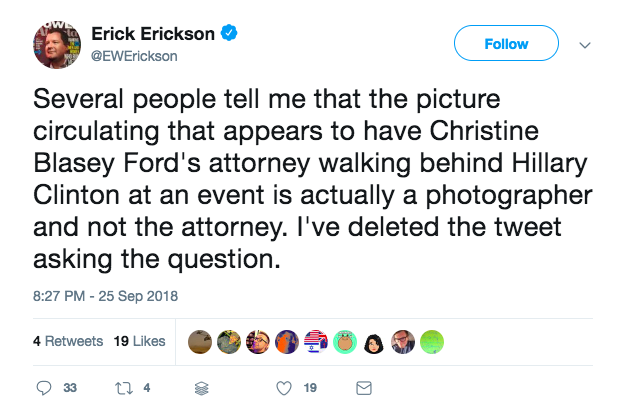 The false claim continued to spread this morning, both on Twitter through smaller accounts, and even outside of Twitter through a major online publication. At 7:13 AM today, tabloid news website TMZ published an article headlined “BRETT KAVANAUGH, DR. CHRISTINE FOD Lawyers for Both … STRONG HILLARY CONNECTION.” The article included the viral image, with the addition of Barbara Kinney being mislabeled as Debra Katz with a red arrow. 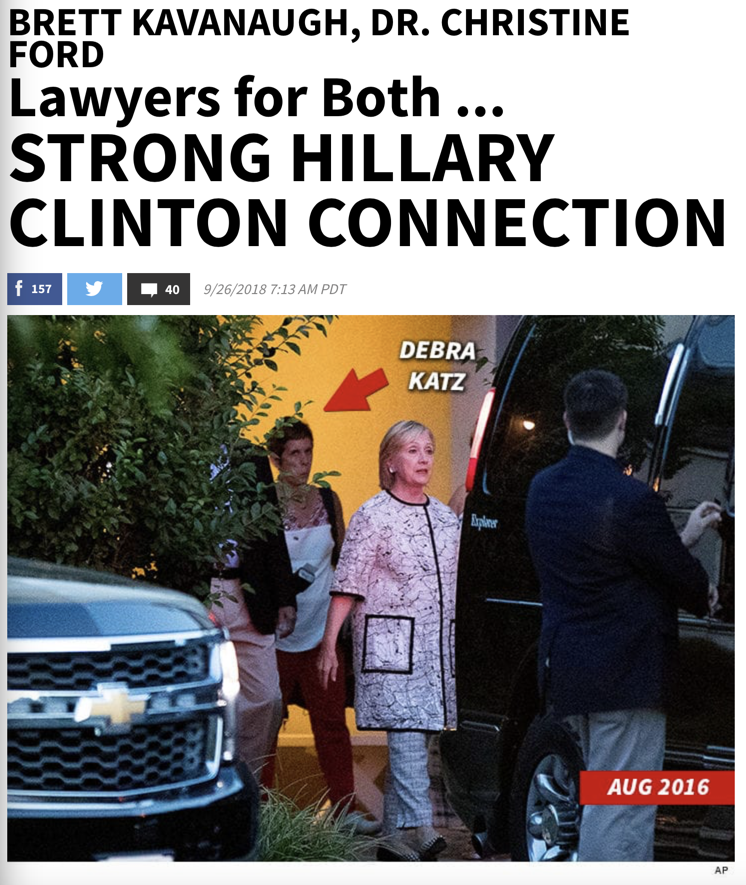 TMZ removed the photo from the article and added the note, “Earlier, we posted a pic of Hillary with a woman who’d mistakenly been identified as Katz, but it wasn’t her.” An archived version of the original article can be seen here.