Friday was dominated by the tragic news of another mass shooting at an American high school. This time around, a 17-year-old male student when on a shooting spree at Santa Fe High School in Texas, leaving ten dead and ten more injured.

Hours after the massacre, however, a regular viewer of Fox News’ Tucker Carlson Tonight would have hardly known the tragedy had occurred. At the very top of the broadcast, host Tucker Carlson made a brief mention of the shooting.

“We’re sad to tell you there was a school shooting in Santa Fe, Texas,” the conservative commentator stated. “The shooter has been identified as 17-year-old Dimitrios Pagourtzis. Tonight we are learning much more about him and what took place at the school. We’ll have an update on all of that in just a minute.”

And with that, Tucker moved on to much more important news — a second day of claiming liberals and Democrats have a soft spot for violent gang MS-13. During his monologue, Carlson questioned whether the Democratic Party was going to add a defense of MS-13 to their platform in 2020.

“You can see it — maybe Bernie Sanders will feel the burn a little more literally,” Carlson snarked. “Kamala Harris’ campaign will certainly be Stronger Together with the added muscle.”

After debating with progressive radio host Leslie Marshall a bit about MS-13 and the Dems, Tucker brought on NRATV host Dan Bongino. And while you would have thought that a mass shooting would have been a good time to talk about guns with an NRA representative, the two men instead spent their time discussing MS-13 and how it sucked to be called “deplorables.”

Following chat time with Bongino, there was a two-minute Fox News Alert hosted by Trace Gallagher in which correspondent Casey Stegall provided an update from Santa Fe. After Stegall delivered his report, Gallagher noted that so far there were “no signs at all of any mental illness, no threats, no vendettas.” He then tossed it back to Tucker Carlson Tonight.

That would be it. Aside from the 17 seconds at the top of his show, Carlson himself never mentioned the shooting during the broadcast. So, what else did Tucker cover on Friday night?

He touched on the Defense Department’s investment in robots, complete with an appropriate graphic that read “Twisted Priorities”. 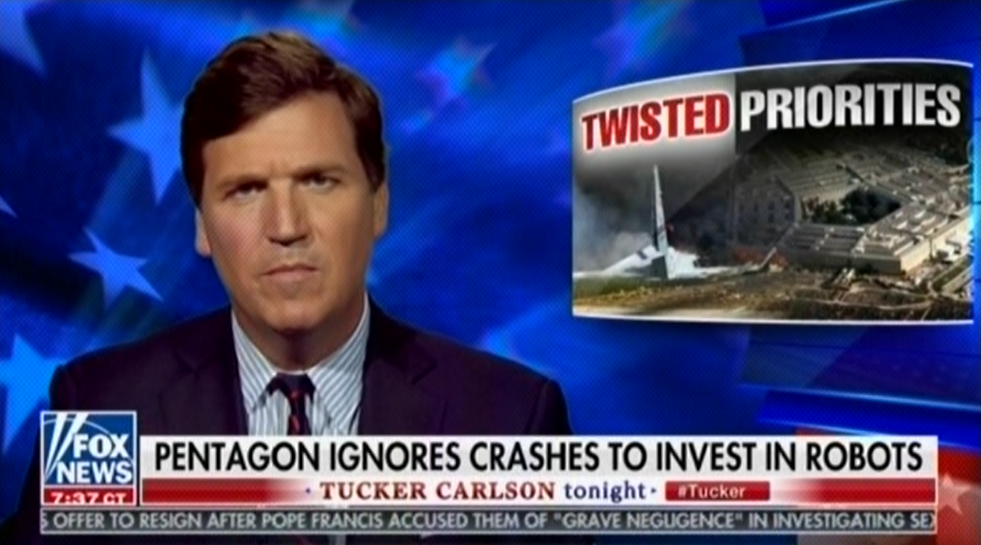 There was a segment devoted to the Trump administration targeting Planned Parenthood that would bar facilities from receiving funding if they perform abortions. Carlson also had a panel discussion on Friday night’s reports on the informant the FBI used to collect information from the Trump campaign for its Russia investigation.

Towards the end of the broadcast, the topic switched to whether or not parents should ask for consent before changing their babies diapers. Apparently, some person somewhere made these comments, and Tucker felt that he should spend some airtime debating the issue with “The Liberal Sherpa” Cathy Areu.

Tucker wrapped up the hour with a bit some conversation about the royal wedding. And that, as they say, was that.