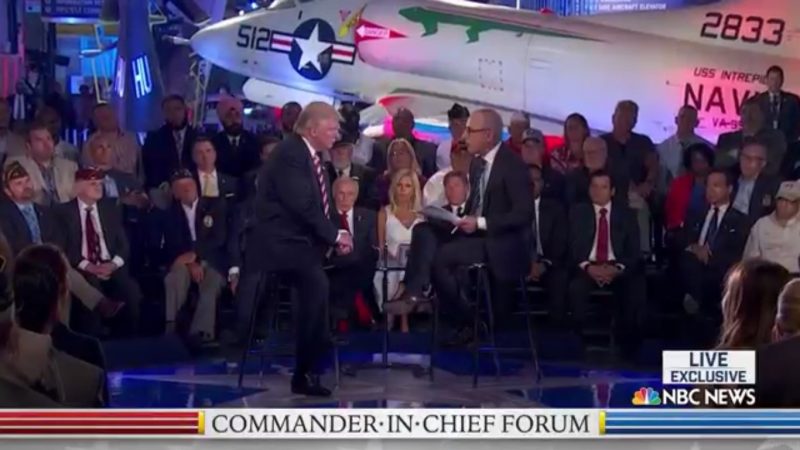 Despite having five months to prepare for NBC’s Commander-In-Chief Forum that aired Wednesday night, moderator Matt Lauer still managed to punch himself squarely in the dick. Because that’s what a Matt Lauer does.

Following up his portion with Democratic nominee Hillary Clinton in which he spent nearly half of the time grilling her about her emails and private server, Lauer took his foot off the pedal with Republican standard-bearer Donald Trump. Even though he knew going in what Trump’s answers would be on two questions, and that those answers would certainly be 100% false, the NBC host offered no follow-up or pushback.

Early on in Trump’s segment, the ex-Apprentice (which just happens to air on NBC) star repeated his already debunked claim that he opposed the Iraq War from the start. Even though Hillary had already brought up the fact that Trump supported the invasion back in 2002, Lauer let Trump blurt out the following without saying a word.

First off, 2004 was AFTER THE WAR BEGAN. It had been going on for a year and the debate in Washington went on for a year before the start of the war. You can’t fucking point to a magazine article in 2004, when the country started shifting its opinion and John Kerry ran as an anti-war candidate, to prove you opposed it all the way.

Of course, what’s more shameful is Matt just letting it go and doing no additional questions. Heck, on Hillary’s emails, it was question after question of follow-up. Trump? Nada.

There were opinions on Twitter of Lauer’s dropping of the ball on Iraq:

“I was totally against the war in Iraq,” Trump says, saying something that is not true. Matt Lauer offers no follow up.

Trump is lying about what he said on Iraq and Lauer just lets it go by. Lauer did four follow ups on email.

How in the hell does Lauer not factcheck Trump lying about Iraq? This is embarrassingly bad.

Sure Trump is lying about the Iraq War up, but at least he didn’t use a private server. Eh, Lauer?

Later on, Lauer had another opportunity to nail Trump on an obvious lie and whiffed. Trump brought up the intervention in Libya that led to the removal of Qaddafi. He talked about how he opposed it all the way and called it a big mistake. However, early on, he was a strong supporter of military action. This has been fact-checked over and over, mainly because Trump keeps saying it again and again. Therefore, Lauer should have been ready.

Trump now attacking Hillary for intervening in Libya, which he supported! Lauer, of course, doesn’t fact check him https://t.co/p4aXecJslu

Hey, Matt Lauer, now is the time you remind Trump he wanted to invade Libya too. https://t.co/qKvdLGbzBJ #NBCNewsForum

After Trump attacks Clinton on Libya, Lauer doesn’t follow up on Trump’s past support for that intervention #NBCNewsForum

Now, mind you, even though Lauer was far more aggressive with Clinton and basically treated Trump with kid gloves while posing generalized questions to him, the GOP nominee did not come off well in the end. For the most part, he appeared as an ill-prepared clownish buffoon who thought he could just keep repeating Make America Great Again to mask the fact that he has no earthly idea what he’s talking about.

Whether or not Lauer pressed him on policy, or followed up with additional questions to pry more specifics out of him, it probably wouldn’t have mattered. This forum once again proved the emperor has no clothes on. And it also proved once again that Matt Lauer sucks.