I am a lifelong fantasy fan, and I am patient.  Still, like many others, I was started to get irritated with my beloved Game of Thrones.  Especially in season five, the show was beginning to get a reputation for grinding its female characters down, what with gratuitous rape, de-powering, humiliation, and the deaths of two politically important female characters that are still alive in the books (Shireen and Myrcella).  I won’t kid myself that I planned to stop watching, but I certainly was getting tired of it all.

And there was no character I hated more than Melisandre, “the Red Woman,” sorceress and priestess to the Lord of Light.  Not only does she represent dangerous religious zeal, but she is also a bundle of poisonous feminine stereotypes rolled up in a suggestive scarlet cloak.  She is a woman whose sexuality puts otherwise rational men in her thrall, who gains power through manipulation, who takes the traditional fairy-tale role of the evil stepmother by murdering Stannis’ daughter.  She threatens and seduces her way through life, not even displaying her own power, but rather ascribing all her will to a (male) god.  Not exactly a dessert course for feminists.

Those of you who saw last night’s episode (which I assume is everyone reading this, because SPOILERS) will wonder where I’m going with all this.  What about last night’s big reveal has me changing my opinion?

To recap, I’m talking about the moment from last night’s episode in which Melisandre took off the necklace she always wears and revealed to the viewer that she is actually a very old woman, the necklace presumably providing her with the glamour that makes her appear ‘beautiful.’  This scene was placed at the end of the episode, right before the credits rolled.  Reactions were predictable: 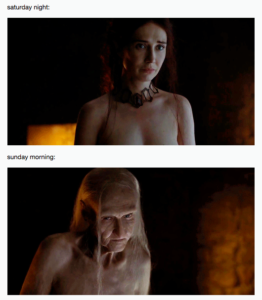 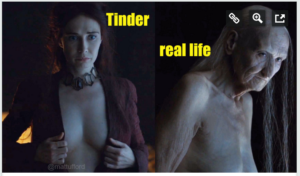 These reactions annoyed me, not because I don’t like humor, but because I don’t think they give credit to what the show is doing here.  I wasn’t particularly surprised at the ‘revelation’ that Melisandre is an old woman; the sorceress in folklore is never what she appears, and disgust for aged and/or non-reproductive female bodies is a thread that runs through our culture, especially in fantasy stories.  But I didn’t think the show was going to give us a visual on that, and here’s why.

Our culture’s misogynistic disgust for elderly women’s bodies used to be part of the realm of horror.  It was aligned with the supernatural grotesque, particularly in the figure of the witch.  The below Durer image of a witch riding to do her evil work is representative of such an outlook. 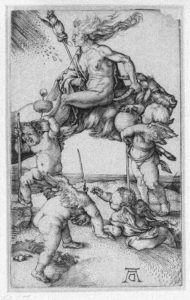 Now, old women’s bodies are ghettoized to comedy, from Disney characters like Izma in The Emperor’s New Groove to the endless parade of romantic comedies in which people are traumatized by the idea of their parents having sex.  Instead of being old, women in modern horror stories must work their evil crafts by being beautiful.  Our aesthetic senses demand female beauty as a precondition to take female power seriously, even where we are horrified by it.

Melisandre is just, ugh, the absolute worst, but we have to admit she (as portrayed by actress Carice Van Houten) is beautiful.  She is also one of the most frequently nude characters on the show.  If I had a nickel for every time my male friends had joked about not wanting Melisandre’s character dead because she was too hot, I’d have enough money to buy up government interests and destroy the patriarchy from within.

And that, I think, is why it’s so important to me that we saw Melisandre as she is.  The scene, placed as it was at end of the first episode of the season, traditional place for a twist, may have been intended to shock, but it still took the character seriously.  It was not played for laughs.  Melisandre looks old and tired even before revealing her true face.  With a sad gaze into the mirror, she takes off the disguise meant to reflect men’s fantasies back to them (and remember that, at this point in the story, she is surrounded completely by men) and looks at herself in her own estimation.  The care of presenting herself as the world wants to see her has worn her down, and she needs to be with herself.  In an exaggerated, fantastical way, she does what I do when I take my makeup off every night.

I worry about how the people around me are going to react to this scene.  I worry they’re going to see Melisandre as a liar for disguising her true figure.  I have a great emotional investment in the fact that she is not–in the same way real-life women aren’t liars for wearing makeup, for putting on spanx and high heels, for straightening or curling our hair.  We show you what you want to see because if we don’t we risk social violence: mockery, ostracism, or simply being ignored.  Part of the insidiousness of the male gaze is that we are sometimes only able to access power through it.

Melisandre just blew it all to bits.  I almost don’t hate her any more.