The combination of the rise of the Black Lives Matter movement and the ascendancy of Donald Trump as a legitimate Presidential candidate has led to the growth of the so-called Alt Right. This supposed political movement is really nothing more than white nationalism with a new paint job, gathering more and more followers and believers as Trump’s embrace of xenophobia and racism makes it more and more socially acceptable.

Black Lives Matter, with its calls for better police practices, an end to institutional and structural racism, and pleas for true social justice on a grand scale, is a natural target for the Alt Right. In the aftermath of numerous police killings of unarmed blacks that led to the rapid development of this loosely-organized movement, white nationalists became more emboldened after being pushed the fringes for years. Before long, social media was inundated with phrases such as ‘White Genocide’ and ‘Cultural Marxism,’ rallying cries of white supremacists for years, but suddenly finding a more mainstream audience.

This is where we encounter Amy Stephen, a white woman living in rural Nebraska who somehow went from being a supposed ally to the BLM movement to now basking in the limelight of the white supremacist trolls that harass black activists on a daily basis. On Sunday, Stephen took to Medium to publish a self-pitying tale of how she was excised from Black Lives Matter for having the temerity to look at other sides of the argument. She used her post to rail against “the echo chamber of political correctness,” while claiming Cultural Marxism is destroying this country.

But, what exactly happened to Stephen, and was she a victim of being too intellectually curious as she claims in her piece? Or is she a two-faced opportunist who was exposed as being a conduit of hate after she directly led white supremacists to troll BLM activists? (I think you already know the answer.)

Stephen’s tale of woe began last December when the hashtag #ByeAmy popped up on Twitter. See, Stephen had become a well-known ally of the movement since Michael Brown’s death in August 2014 led to protests in Ferguson and made the small Missouri suburb a household name around the world. While sitting in her home in Nebraska, Stephen built up a significant social media following, tweeting support for the growing movement and helping spread the word. Sure, most (all?) of what she did was online and just rhetoric, but exposure is exposure, and she became a recognizable Twitter presence.

Well, somewhere down the line, Amy took to following and conversing with white nationalists. According to her, this was all just an innocent attempt to find out how the other side thinks, but the problems it created for her BLM ‘friends’ was immediate. The thing is, Amy would constantly retweet many people from #BlackLivesMatter, leading to her new white supremacist buddies to immediately jump into Twitter conversations with them. This would lead to all kinds of commotion, with the Alt Righters now having an easy access point in Amy’s Twitter account to target specific BLM activists.

The boiling point, apparently, was when it was discovered that Amy was friends with well-known nativist troll Ricky Vaughn, who seemingly spends all of his time harassing liberals and minorities online. This led to a blow-up between Amy and a couple of others in BLM, leading to the #ByeAmy hashtag making the rounds. While more and more activists chimed in, Amy went full victimhood, consoled by her newfound Alt-Right friends.

When a former “ally” jumps into the deep end with full on racists… And claims SHE’S the victim #ByeAmy pic.twitter.com/AKN6TP3KGx

Since being publicly excised from Black Lives Matter, Amy has stopped all pretense of being even slightly concerned with any of the social justice platforms she once promoted. Her Medium post pretty much lets you know that she believes in things such as white pride and the previously mentioned Cultural Marxism. However, in the essay, she tries to couch it as part of a true open-mindedness that she wants everyone to achieve.

Of course, this is fucking rich if you spend even just a few minutes perusing her Twitter account these days. First off, let’s just take a look at the people she thinks are worthy of a follow. Among at least semi-famous people, we see David Duke (yes, THAT David Duke), Milo Yiannopoulos A/K/A Nero, Ann Coulter, Gavin McInnes and (natch) Donald Trump.

However, the truly disturbing thing is that the vast majority of her follows are of those who proudly declare themselves as Neo-Nazis, white supremacists, Jew haters and the like. Now, having these be her followers makes some sense, based on her new celebrity among the Alt Right, but the fact that she actively follows them? And, as they make up almost the entirety of her follow list, isn’t she now ensconced in her own ‘echo chamber’? The kind she so vehemently decried? 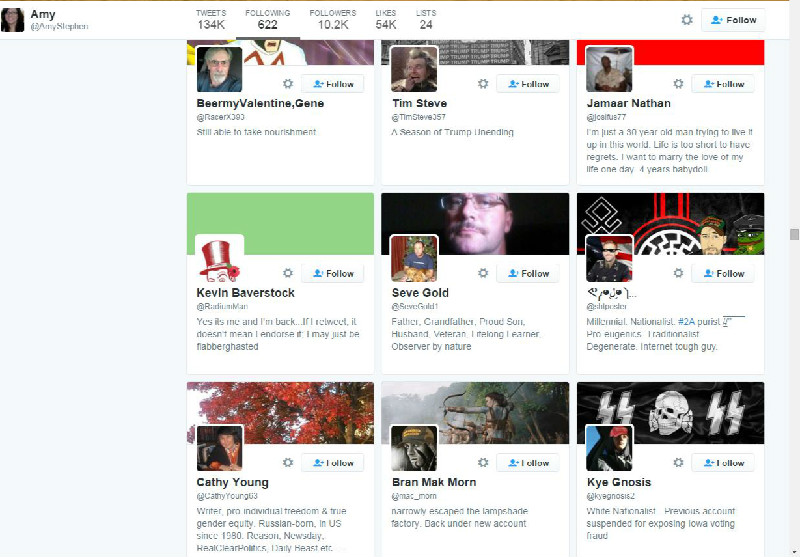 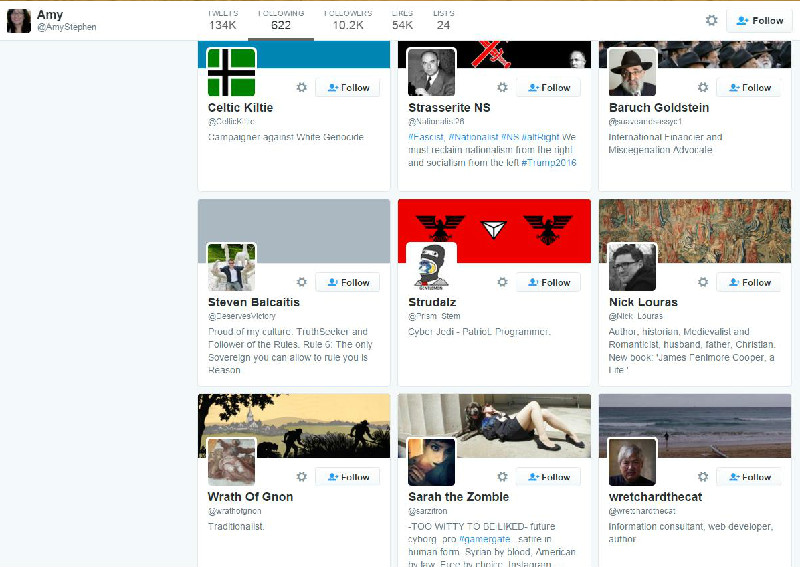 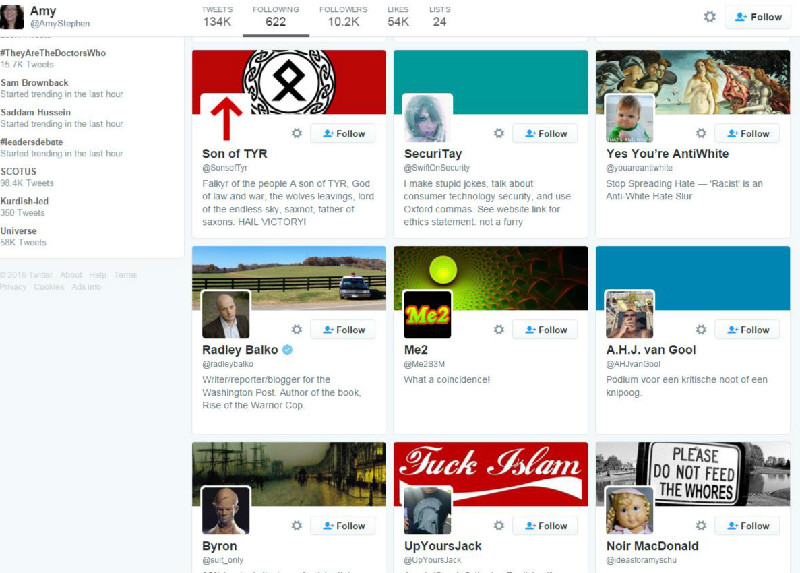 In the end, is Amy Stephen just a misunderstood, possibly confused, person who is really, honestly, just trying to get to the TRUTH? Or, is it more craven than that? Is she someone hoping to use social media and the bouncing between two highly disparate social movements in an effort to heighten her own profile and perhaps transition into an actual media figure? Hell, there are all kinds of right-wing publications, radio programs and media outlets out there. At least one would love to bring on someone who jumped ship from BLM to #Trump2016, right?

Who really knows her motivation. And there’s no point asking Amy as there is no chance you can get a straight answer from her these days. But one thing is clear. She has become a leading online figure of white supremacy. Whether she wants to admit it, own it, embrace it or celebrate it, this is now her legacy. And her actions are exactly why many black people in the movement are wary of white ‘allies’.

[Ed. Note: Stephen’s occupation was initially listed in this article as a librarian. However, conflicting information has been provided. Therefore, this reference has been removed.]