League of Legends is a complex game disguised as a simple one, and arguably one of the most difficult games that a casual gamer has access to, thanks to its ever-increasing and rabid fan-base, the reach of its world-wide competitions, and its free-to-play, money-isn’t-power business model. There are harder MOBAs, and certainly harder games, but all of them more obscure or more expensive. With a millions-strong user base, the game attracts a diverse player base that is notorious for not mixing well.

This is a real exchange, pulled from subreddit that collects toxic chat, but it exemplifies a common type of interaction. One player will type something light-spirited and fun, and will be met with an almost astoundingly negative, often hostile reaction from others. In this case, the character who made a successful play decided to also have some RP fun—a double-whammy attack on the masculinity of the enemy. This will not stand. Somebody must be called a n*****. Riot Games calls this brand of negativity “toxicity”—where in-game actions (usually decisions made for the sake of fun, or decisions that resulted in in-game failure) are met with slurs, threats, or passive-aggressive but incredibly angry tirades.

I contend that the source of League of Legend’s toxicity is in a very big way a result of a system intrinsic to the game itself—the fact that once a match begins, every player must remain in the game for its entirety or else risk losing their account and any rewards and items they’ve accumulated. Leaving is against the rules, and this makes sense on a surface level. In a game that requires two teams of five, one person on either side quitting ruins the game for 9 other people. But this paradigm incubates the exact situations that people walk away from in every other part of the internet. The toxicity in an in-game chat session where one player tells another to go eat a gun is a surface-level consequence to a deeper issue. And while Riot Games is correct to punish this sort of behavior, they’ve largely failed by framing it as an in-game issue, presenting toxic behavior as a reason players lose games. They’re trying to discourage bad behavior while leaving ten complete strangers together in a steam heater with no way to escape. In an application of feminist theory, we can amend Riot Game’s use of the word toxicity to toxic masculinity.

The people who make League of Legends, Riot Games, understand the effect this sort of toxicity has on a match, and have a system in place to punish overly unpleasant behavior; they dole out anything from permanent account closure for the most extreme cases, to warnings and the revocation of chat privileges or in-game performance-based rewards in milder cases. But this is like expecting Ben-Gay to cure a broken bone. Where toxic masculinity requires the patriarchy, Riot Games has handily presented a comparable system—leaving a matchmade game of League of Legends is forbidden, and punishable by being banned from the game—the same punishment reserved for the most toxic players.

Toxic masculinity describes ways in which the oft-misinterpreted patriarchy is harmful to men. In this case, a patriarchal assumption—that men should just be able to deal stoically with abuse—is causing tangible harm to the gamers who love the game and the community. To be clear, it is not a portion of the community’s refusal to see League of Legends as a “fun” activity that is causing this toxicity, though the “I play for fun” and “my gaming is serious business” sides of the community have some fairly obvious bones to pick with one another. 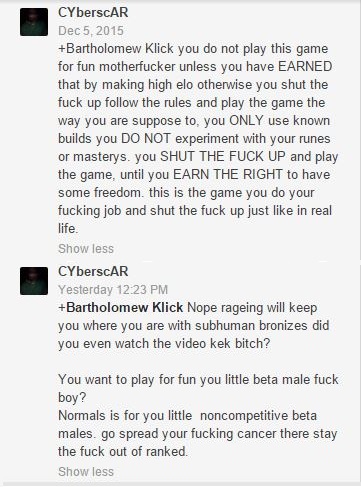 For people who take it seriously, League of Legends is (or has the potential) to scratch the itch of rigorous training and martial tradition. This may seem silly to an outsider, but it’s a wargame at its heart, and an incredibly difficult and arcane one compared to most other casual games. Neither of these things are inherently toxic, and working within the confines of a training regime or a martial tradition can be mentally healthful. These are arguably masculine activities and do not need to be “fun,” so it makes sense that aspects of these approaches to activity could find their way into a certain, even large corner of competitive gaming.

And those aspects of masculinity don’t have space for toxicity. The major aspects of toxic masculinity that come into play in a toxic episode of League of Legends are vitriolic expressions of rage, a sense of entitlement to grief one’s teammates over poor performance, and shaming people who lack certain information (rather than, you know, just explaining a concept.) The ideal forms of the types of masculinity at play manifest partly as effective teamwork and stoicism in the face of insurmountable odds—the parts of League of Legends that create memorable experiences and the sense of epic moments that keep drawing people back. There is no space in either of these things for rage.

We can Rebuild It. We Have the Technology

In toxic masculinity, the villain is not the man, but rather the manifestation of patriarchy that is influencing his behavior. And to be clear, the behaviors under discussion here affect female games as well—one need not be male to rage, or to be the victim of rage. My contention then is that the toxic behavior of the player base that has earned League of Legends its bad reputation is actively encouraged by a patriarchal system that holds the 5v5 gaming experience to be of more value than the experience of the individual players—whether they are looking for fun or a sense of epic competition. By preventing players from disengaging from a hostile situation, the game’s system steam-boils a negative encounter until it is genuinely toxic, causing people who would otherwise have simply left to lash out, or to shut down completely and fail faster. Ironically, any outcome of toxicity still ruins the 5v5 gaming experience that trying to force people to not quit mid-game attempts to preserve.

So often the exchanges in League of Legends are extreme enough that, were they made in person, they’d be treatable as verbal assault, and not mere gaming banter. But worse, there is no real way to escape these situations for a dedicated player. In most other games, the option to disengage from someone who is creepy or enraged exists. Simply leave. Log out, stew for a moment, and then go on about your business. The consequences for leaving a normal online game are minimal.

But in League of Legends, the consequences for leaving a game in progress are account suspension, with the possibility of being banned altogether. And some player’s accounts represent very large investments of time and money, so leaving a game because of a rager or a griefer represents a huge risk. And while, yes, it does ruin 9 other people’s gaming experiences when one person elects to leave, sometimes leaving is the right and proper, justifiable response to bad behavior. When racial slurs or threats, or even just an unending tirade of aggressive verbal abuse are being slung casually around, sane people disengage, and this needs to be an option. The gaming experience is not sacro-sanct, but it is held as such, and this is the beating heart of the toxic masculinity that pulses throughout the League community. There is an expectation that League players will shut up and swallow someone else’s bullshit, and this helps create a massive amount of the unpleasant behavior that Riot Games is trying to prevent with their punishment system.

Self-awareness from the community about bad behavior, post-game reports that lead to punishment, and the ability to mute or ignore negative players are only a very small part of the puzzle. If Riot Games wanted to make a true push for the end of toxicity, they’d implement a system that did not punish people who left the game, but rather, they would build the game from a perspective that accepts two sets of facts: leaving a match worsens the experience, and that some people simply do not and will not get along well enough to form a functional team.

This is more than addressable, but it would require significant effort on the back-end of the game.

Here’s how I’d fix the problem. If someone leaves, make the game pause. If they come back, great. If they don’t, let the game start subbing players in, and reward the people who choose to be the pick-up players that fill empty slots in already-in-progress games. If this system is implemented, suddenly, the purity of the 5v5 gaming experience is no longer held bizarrely superior to the health of someone’s psyche who really, really just wants to get away from a toxic player. A player can safely leave without ruining everyone else’s time, and now there’s space for new players to pick up the empty spots and be heroes. Simply allowing leaving and implementing player substitutions would single-highhandedly destroy a major root cause of toxicity—removing the expectation that suffering should be part of the gaming experience—while also allowing other players to fill a new role and take on the positive identity of “guy who fixed our game.”

Ultimately, bad behavior in any form is inexcusable and Riot Game’s punishment system is a good step forward for moving the community forward from the sort of shocking behavior its known for. “I play for fun” gamers should absolutely be punished for purposefully trolling players who take the game seriously, and “this game is serious business players” should likewise be punished when they lash out verbally. At the same time, however, the assumption that these players should be forced to deal with each other in any extreme outbreak of bad behavior is exactly as toxic as the behavior itself.

Like the idea of pausing the game and subbing in players? Hate it? Think I’m just full of shit? Let me know in the comments below, or tweet to me at @RamenEmpire.