Why can’t Meghan McCain have the courage to defend her terrible opinions about the Iran nuclear deal?

Granted, it is not the most pressing question facing the republic. But it is entertaining that on the morning after Donald Trump apparently elevated himself to Nobel Peace Prize contention by calling off at the last minute the airstrikes on Iran that he had just ordered, McCain deleted this 2017 tweet after someone dug it up and started passing it around: 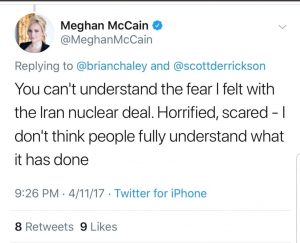 The context for the conversation was McCain explaining why she felt so scared living under the terror of the Obama administration:

The logic of Donald Trump’s pledge to rip up the nuclear deal with Iran and bully that nation into some ill-defined replacement was always that war was the natural endpoint if Iran refused to comply. This was exactly why hawks such as John Bolton and Lindsey Graham — a man McCain called “Uncle Lindsey” before he became a Trump toady — pushed him to pull out of it. Taking war off the table was also exactly why McCain’s late father disliked the deal.

Iran’s recent lashing out in the form of shooting down the American drone and the alleged attacks on ships in the Strait of Hormuz is exactly what experts predicted would happen if Trump pulled the United States out of the nuclear deal. The deal that so terrified Meghan McCain was actually preventing this level of confrontation.

Perhaps McCain realizes that now, but don’t look for her to admit it. She’ll just delete any tweets that supported her past position.

Interestingly, there was no mention of Iran on McCain’s show, The View, on Friday. Because being the host of a nationally televised talk show that discusses political issues means never having to take responsibility for being galactically wrong.