Chris Cuomo Lights Up Tucker: ‘He’s Just Got That Pissed Puppy Dog Puss’ On His Face

At the end of his Friday night broadcast, CNN anchor Chris Cuomo hammered a number of Fox News hosts for parroting and amplifying President Donald Trump’s message that Democrats have become radicalized and are nothing more than an “angry mob.” And when it came to Tucker Carlson, who has been taking pointed shots at CNN of late, Cuomo had some choice words that surely won’t sit well with the conservative commentator.

“Media can be a feedback mechanism for what’s out there,” Cuomo noted during his monologue about politics’ and media’s race to the bottom. “With Trump, it doesn’t create the energy. it harnesses it, turbocharges it. That’s Fox.”

Regarding Sean Hannity, Cuomo said he represents “righteous indignation” before playing a short clip of Hannity yelling that the left reaches “new lows on an hourly basis.” As for Laura Ingraham, Cuomo noted that she has the “curled lip of disgust” as he showed her expounding on the “chaos strain” that has “infected” the Democratic establishment.

“And Tucker — he doesn’t have anything,” Cuomo snarked. “He doesn’t have to say anything. He’s just got that pissed puppy dog puss that he has on his face.”

He then presented this image: 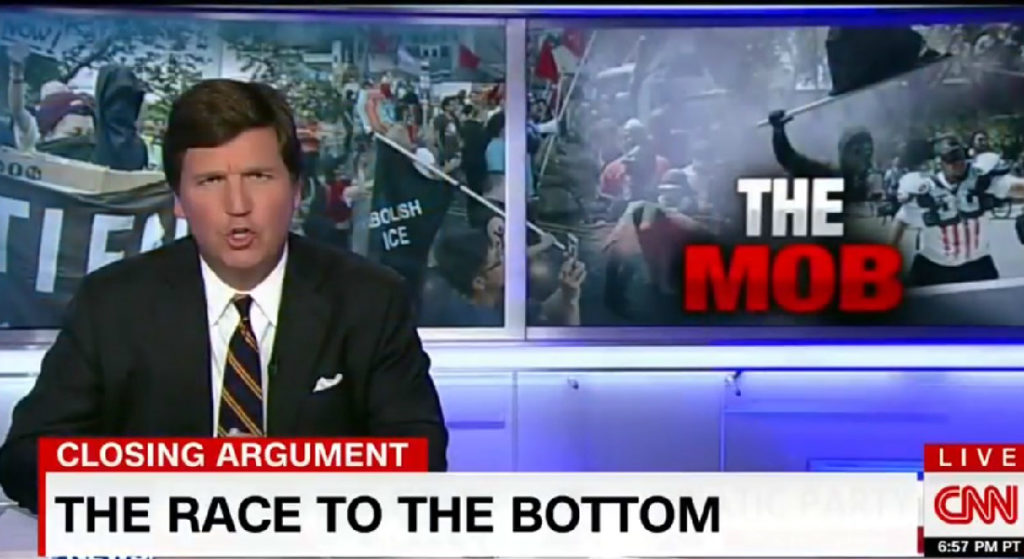 “There it is, the CNN host laughingly said.

Cuomo went on to say the Fox News personalities are “finding common enemies with their base” and “encouraging animosity” while calling Trump’s MAGA slogan an “angry shake of the fist.”