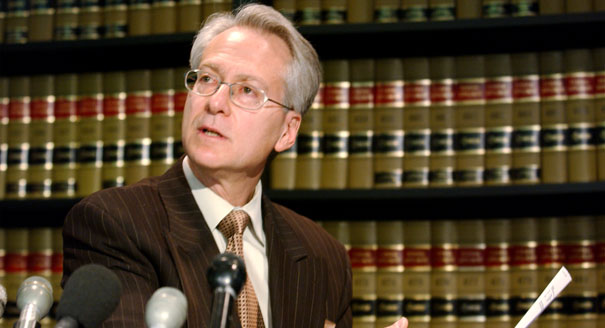 Larry Klayman, an attorney who has brought at least 18 lawsuits against Bill and Hillary Clinton, has claimed that if Clinton is elected president she will cause a ‘Holocaust’. Writing a column for the right-wing site, WorldNetDaily, Klayman said there will be a ‘political bloodbath’ and ‘pogroms’.

“Indeed, there is likely to be a political bloodbath the likes of which the country has never seen or contemplated,” Klayman wrote. “The vision and God-given creation of the Founding Fathers will have been forever trashed. The United States will no longer be the beacon of freedom, but simply a freak show of reverse racism and hatred for anyone who is not socialist, feminist, secular, atheist or who is of European and Judeo-Christian heritage. It will make Ayn Rand’s Atlas Shrugged look like a watered-down version of Mein Kampf—as leftist fascism takes total control on our shores.”

Klayman is the founder of Judicial Watch, a right-wing ‘watchdog’ organisation and he has filed many lawsuits against prominent figures, including former vice-president Dick Cheney, Facebook’s Mark Zuckerberg and Republican presidential candidate Ted Cruz. Klayman filed a suit against Hillary Clinton in August this year over the deaths in Benghazi, Libya.

In his column, Klayman said that ‘as the Wicked Witch rides her broom to the Capitol building’ American patriots should ‘fight a guerrilla revolutionary war to win the country back to the people’. Klayman believes that a vast conspiracy is out to deny Donald Trump the White House. His article refers to House Speaker Paul Ryan as a ‘slimy rodent’.

“Hillary Clinton and her comrades will have total control of government and a carte blanche to carry out their ‘political pogroms’ if not ‘Holocaust’,” Klayman wrote. His words will likely reverberate with Trump supporters who believe the election will be rigged and are already calling for ‘Second Amendment Remedies’.