Fox’s Brian Kilmeade Defends His Attacks on Alexander Vindman: ‘This Lt. Colonel Was Born in the Ukraine’ 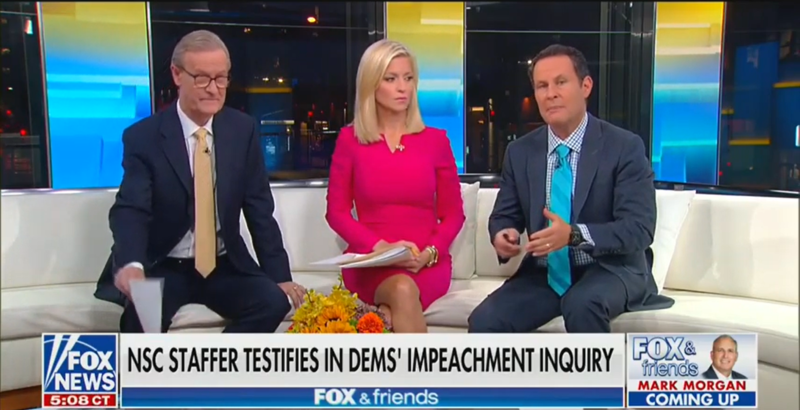 Fox & Friends’ Brian Kilmeade has defended his attacks on Lt. Colonel Alexander Vindman, a key witness in the impeachment probe of President Donald Trump. Kilmeade acknowledged there had been criticism of his remarks and similar comments made by others.

“I think it’s a joke that people think that if you have questions to lieutenant colonel because he’s a great war fighter that you’re somehow not patriotic or don’t like the military which was the blow back that we were getting from our show and others.”

“I think that’s farcical. There’s no doubt about it. This lieutenant colonel was born in the Ukraine. He came here,” Kilmeade said.

“Reportedly the Ukrainian government reached out to him about Rudy Giuliani working as an envoy for the President. And to think that maybe he was going to come forward with an additional point of view and can’t be challenged because he served in the military, it doesn’t make any sense to me.”

On Tuesday’s Fox & Friends, Kilmeade said repeatedly that Vindman had been born in the Soviet Union. Vindman left Ukraine at age three and served in the U.S. military in Iraq. He was awarded a Purple Heart after being wounded by a roadside bomb.

Attempts to discredit Vindman have followed a similar pattern to Kilmeade’s: Speculation about his loyalty because of where he was born.