RNC Chair Ronna McDaniel: ‘Socialist’ Democrats ‘Are Addicted to Power’ and Will ‘Never Let It Go’ 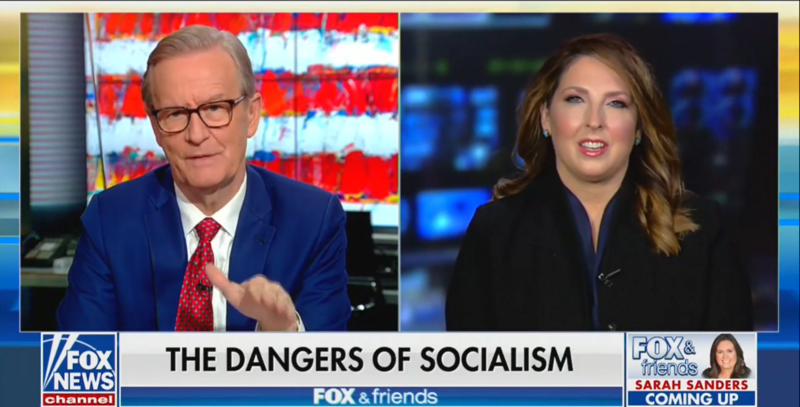 Ronna Romney McDaniel, Chair of the Republican National Committee, has warned that Democrats have a socialist agenda and are addicted to power. McDaniel spoke to Fox & Friends on Tuesday about the RNC’s new ‘Victims of Socialism’ campaign.’

“Well, when you say socialism a lot of people in this country don’t understand what that means and so when you hear it firsthand from people from Venezuela or Cuba who have dealt with socialism, who’ve been driven from their countries, who have dealt with the poverty and the instability it brings to their government, I think it really resonates,” McDaniel said.

“We’ve launched victimsofsocialism.org so we can hear their stories firsthand. And it is very powerful.”

Following a clip of a video promoting the ‘Victims of Socialism’ campaign, Fox & Friends host Steve Doocy asked if any Democratic presidential candidates were featured in it.

“We actually have in the video a man named Warner, who’s a former mayor,” McDaniel said.

“Bernie Sanders promising free everything. And so they say they hand out free things like candy but they really want the power. These are people who’ve never created jobs. They’ve never built a company but they’re addicted to power. They take it over and they never let it go.”

It’s clear that McDaniel was ascribing these characteristics to Democrats, having first established that they are all socialists, a questionable assertion at best.

“And that is really what socialism has become in these other countries and we should be fearful of it. And these people have lived it. They have fled it. And they understand the opportunity that America provides and they don’t want to see our country go down that same path.”