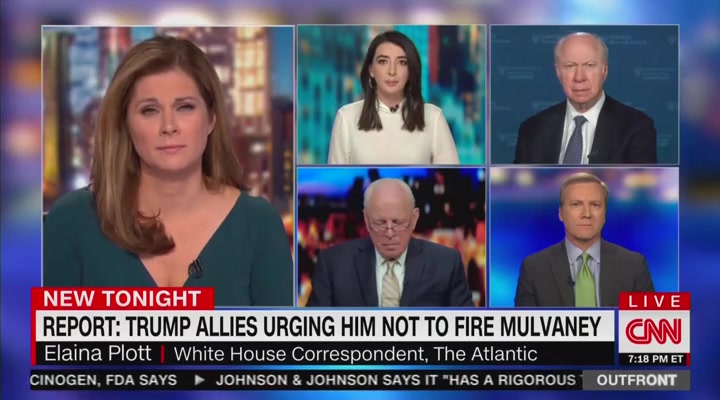 Aides to President Trump are trying to convince him to keep Mick Mulvaney on the job after the acting White House chief of staff admitted that there was a quid pro quo in regards to the president’s dealings with Ukraine, the Atlantic reports.

Trump has apparently been blaming Mulvaney for leaks and unflattering press coverage in recent weeks, and has asked those close to him whether he should find a replacement. But those who have the president’s ear are warning him about the potential danger he could pose from outside the White House. From the article:

As Democrats move forward in their investigation, they’re looking for star witnesses, those officials in Trump’s inner circle who could speak authoritatively as to whether Trump pressured a foreign power to open investigations into both the 2016 election and former Vice President Joe Biden. And should Trump discard an adviser in his preferred manner—hastily announce the news on Twitter, then trash the person’s reputation—he or she may decide to become said star witness.

Discussing the issue Friday on CNN’s Out Front with Erin Burnett, Greg Brower, former assistant director for the FBI, was thoroughly unimpressed with operations at 1600 Pennsylvania Avenue.

“Just think of how dysfunctional a White House would be if the acting chief of staff is only there because the president is afraid to fire him,” he said. “That’s dysfunction at a level that is hard to imagine.”

Mulvaney’s matter-of-fact revelation at a press conference Thursday — which he later attempted to walk back — strikes at the center of House Democrats’ impeachment inquiry into the Trump administration’s withholding of military aid to Ukraine in part to facilitate an investigation of a political rival.