It would appear that Tucker Carlson has found the real victim in the Brett Kavanaugh confirmation hearing.

On Friday night, the Fox News host devoted a segment of his program to the media’s coverage of Thursday’s historic testimony of the Supreme Court nominee and the woman who has accused Kavanaugh of sexual assault, Christine Blasey Ford. And according to Carlson, the lesson to be gleaned from the press is that they believe Kavanaugh and the GOP members of the Senate Judiciary Committee “are inherently bad because of their race and gender.”

And, for much of the rest of the segment, the chyron read some form of the left’s war on “Old White Men.” 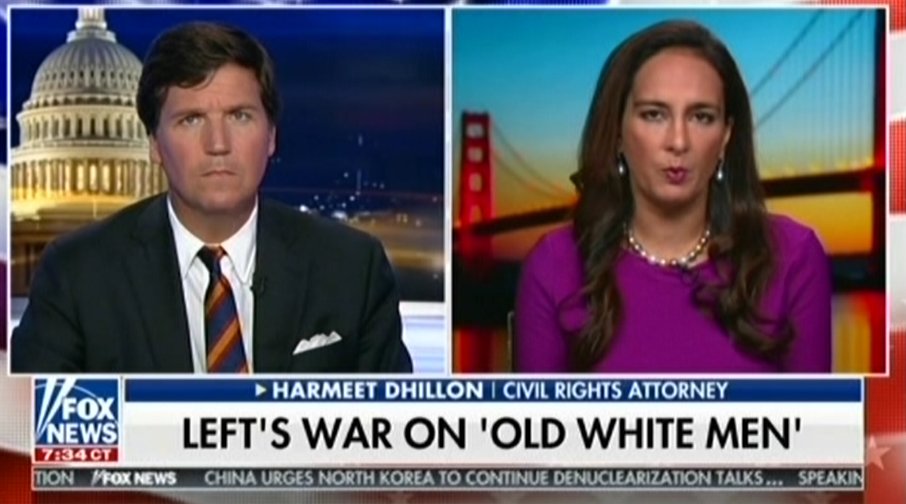 After saying that he knows “people who are fired than saying way less than” The View’s Joy Behar claiming that we could soon see an American apartheid due to old Republican white men trying to cling to power, Carlson applauded the “new and improved” Lindsey Graham for declaring he won’t “shut up” despite being a “single white male from South Carolina.”

Following a back-and-forth with African-American studies professor Jason Nichols that ended with Carlson laughing his guest off, Tucker brought on attorney and Republican Party official Harmeet Dhillon, who agreed with the Fox News host that “it’s fashionable now to beat up on the white men.”

Adding that it is now an “unfashionable concept,” the conservative lawyer asserted that “if you believe in hate speech what you heard yesterday would be the most vicious type of hate speech.”

She continued, “Not just from the senators on the dais but from every Democrat group and all the talking points. It was all hateful toward people like Judge Kavanaugh, which is silly as you point out. Both he and his accuser are from the same class and the same race.”

Calling CNN political analyst David Gergen and others at CNN “dumb people” who are spreading “race hatred” against white men, Carlson wanted to know if Dhillon was worried that they might be encouraging “some kind of conflict.” She responded by claiming we were already witnessing an apartheid against white people.

“We have it, Tucker,” she said. “My gosh, on Berkeley campus across the street where I’m helping with the litigation over there where there are places whites are not supposed to go. That is apartheid.”

Dhillon concluded by stating the Democrats are seizing on this and letting people that that if “you have a white man in front of you, beat up on him for being a white man.”

“You are right,” Tucker noted. “Maybe it works for a term but it seems like the long-term cost is way more than we’d want.”