If there’s one thing we’ve learned about the Trump administration, it’s that they won’t let a good culture war go to waste.

A day after President Donald Trump announced he had revoked the Super Bowl champion Philadelphia Eagles’ White House visit, the Office of the Press Secretary released another statement hammering the team. Noting that the team was only going to send a small contingent of players, the White House claimed the “team decided to abandon their fans.” 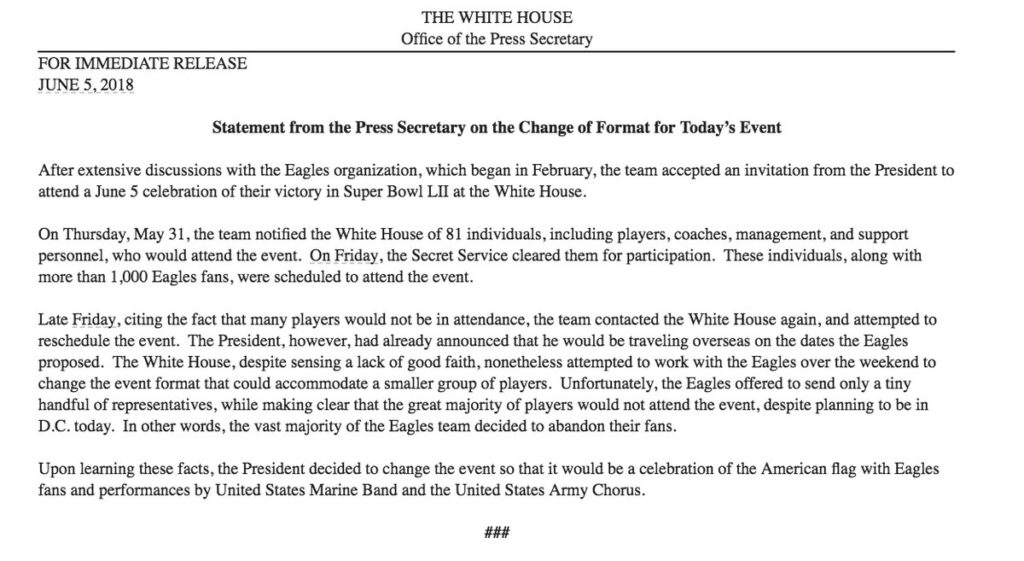 Besides representing the administration as the true champion of Eagles fans, the press secretary claimed that “despite sensing a lack of good faith” from the team, the White House tried to work with the Eagles in changing “the event format that could accommodate a smaller group of players.” It was also highlighted that the president had decided to make the event “a celebration of the American flag with Eagles fans,” an obvious attempt to drive a wedge between the fans and their team.

While the president has seemingly made this whole situation about the national anthem and protests by players, it has been pointed out that no Eagles player kneeled during the Star Spangled Banner during the regular season. Following the disinvite, Philly Mayor Jim Kenney called Trump a “fragile egomaniac obsessed with crowd size and afraid of the embarrassment of throwing a party to which no one wants to attend.”

Trump Is Risking a ‘Katrina Moment,’ Chuck Todd Says, As If He Hasn’t Already