It May Not Be Trending, But Rahm Emanuel Is Still Ruining Chicago 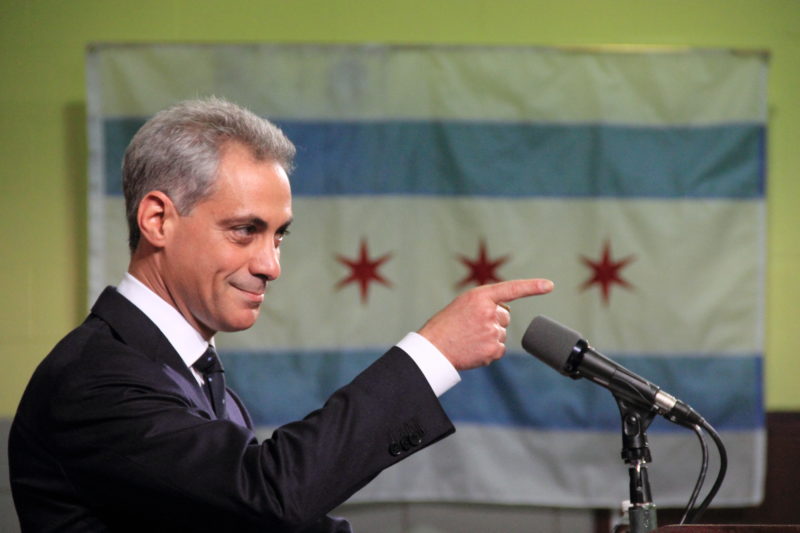 This past weekend I attended the Spring 2016 show staged by the Chicago Gay Men’s Chorus, My Kind of Town. A joyous revue of the Windy City’s history and culture – and the musical evolutions that provided the soundtrack – the talented cast offered song, dance and sketch comedy as diverse as the great Midwestern city I call home.

Act Two of the program featured a bit involving embattled second term Mayor Rahm Emanuel. Handsomely decked out in a tailored suit with Rahmbo’s signature gray coif, the actor absolutely nailed the leader, whose January 2016 approval rating of 27 percent looks enviable from the vantage point of late May. All fleet-footed bounce, R-rated tongue and cynical strategist, the fictional Rahm floundered in slick efforts to distract angry Chicagoans from a derailed administration. In the entertaining universe of the CGMC, a little harmony and soft shoe is enough to put the city to rights – at least momentarily.

Offstage, Mayor Emanuel: The Sequel is far less charming. Earlier this month, writers Monica Davey and Giovanni Russonello of The New York Times produced an important piece entitled, In Deeply Divided Chicago, Most Agree: City Is Off Course. Among other important statistics cited are the following: “62 percent of residents said they disapproved of Mayor Rahm Emanuel’s job performance, and only a quarter approved. Among blacks, his disapproval rating is 70 percent.”

Further: “Most Chicagoans say they doubt that the Mayor cares much about the needs of people like themselves. Among black residents, the feelings are stronger: Only 8 percent believe that Mr. Emanuel cares a lot about people like them, and nearly two-thirds think he cares not much or not at all.”

This is a stunning vote of “no confidence” in a leader who clawed his way through a run-off re-election with the support of the African American community just 13 months ago. A man who once navigated the Clinton and Obama White Houses with such assured dexterity, he inspired a character on Aaron Sorkin’s seminal Washington drama, The West Wing. Today the Mayor’s brand has become so toxic, 2016 Democratic candidates Hillary Clinton and Bernie Sanders want nothing to do with him. In March, Huffington Post Reporter Samantha Lackman wrote, People Hate Rahm Emanuel So Much, It Might Cost Hillary Clinton Illinois. In the piece she observed:

“Since November, Clinton has sought to distance herself from Emanuel following revelations that city officials worked to withhold dashcam footage that showed a police officer shooting Laquan McDonald 16 times as the teenager walked away. Officer Jason Van Dyke was charged with first-degree murder that same month….Sanders’ campaign, meanwhile, seeks to highlight the Clinton-Emanuel relationship.”

So national candidates can’t run far enough from Rahm. The city he “serves” loathes him. And the man once celebrated or reviled (depending upon the audience) as “Mayor 1%,” no longer has the clout to ram questionable business deals down the throats of his constituents. Earlier this month, Bill Ruthart and John Byrne of The Chicago Tribune published, Emanuel Spends Political Capital on Lucas Museum, Has Nothing to Show For It. In a stinging assessment of Rahm’s latest adventure in misplaced priorities, the writers note:

“The museum maneuvering unfolded as more pressing matters that could determine Chicago’s future remain unresolved. Crime is surging. The schools are running out of money…And Emanuel is trying to clean up the Chicago Police Department before a Justice Department investigation does it for him.”

In January of this year, State Representative La Shawn Ford drafted a bill that would permit recall of the Mayor. And a Change.org petition that supports impeachment of Emanuel has received nearly 11,000 online signatures to date. But nearly halfway through 2016, with the next mayoral election an excruciatingly long wait away, media and political clamoring for Rahm’s job has died, failing to match the urgency of regular Chicagoans. Why? It’s not as if Emanuel has become a better, more inclusive leader in the aftermath of the Laquan McDonald tragedy. The city still simmers with inequality. As the Times piece highlights, “By consistent double-digit margins, African Americans and Latinos on the South and West Sides are more likely than North Side whites to be dissatisfied with aspects of their neighborhoods, like the condition of public recreation facilities, services like trash removal, and the availability of public transportation.”

Why has the #FireRahm inferno cooled, fully ablaze as it was just months ago? Self-serving media/political laziness is one factor. Why fight a stubbornly intransigent and still powerful City Hall when an election-year Trump is the headline-grabbing gift of a generation? I appreciate The New York Times keeping this story nationally alive. Summer is coming and there’s no reason to believe the soaring 2016 murder rate will decline in a hot city torn apart by cynical, dehumanizing leadership. I said it in December 2015 and nothing has changed. Rahm has got to go.