Well, that is totally going to show him.

On Thursday night, National Review unleashed the cover of a special edition of their magazine and published a so-called manifesto — co-authored by 21 notable right-wing pundits, writers and publishers — with the sole purpose of condemning Donald Trump’s Presidential campaign. 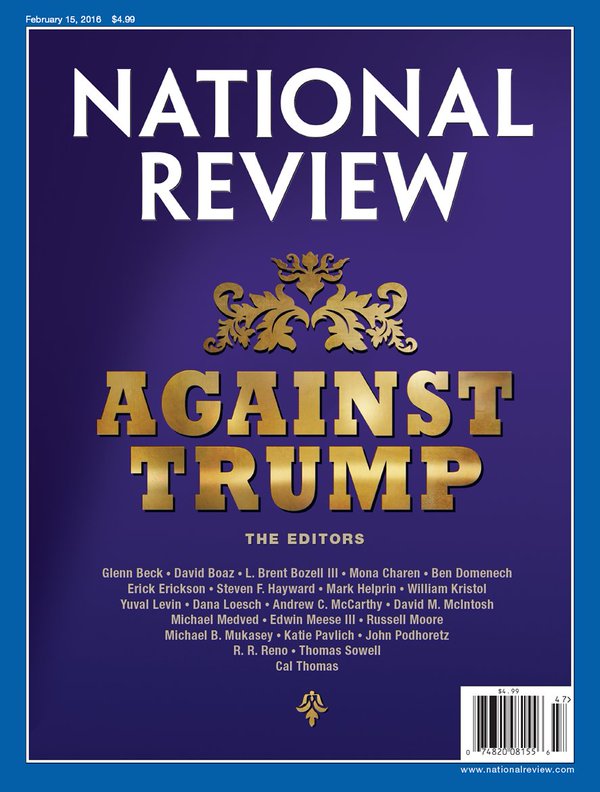 All of the big-name conservatives attached to this takedown of The Donald added their two cents. For the most part, the theme was the same — Barack Obama is evil incarnate and Trump, being a total fake conservative, will continue Obummer’s BIG GOVERNMENT waste, killing America’s spirit. We got all kinds of great shit in this desperate attempt by ‘respectable’ conservatives to distance themselves from their Pandora’s Box.

First, we had perennial crier and former Sarah Palin buddy Glenn Beck, who connected Obama’s post-Great Recession efforts — y’know, the ones that helped prevent us from going into a deep Depression — to Trump:

While conservatives fought against the stimulus, Donald Trump said it was “what we need,” praising Obama’s schemes of “building infrastructure, building great projects, putting people to work in that sense.”

While conservatives fought against the auto bailouts, Donald Trump claimed “the government should stand behind [the auto companies] 100 percent” because “they make wonderful products.”

While conservatives fought against the bank bailouts, Donald Trump called them “something that has to get done.” Let his reasoning sink in for a second: “[The government] can take over companies, and, frankly, take big chunks of companies.”

When conservatives desperately needed allies in the fight against big government, Donald Trump didn’t stand on the sidelines. He consistently advocated that your money be spent, that your government grow, and that your Constitution be ignored.

Walking thumb Erick Erickson used his space to quote Bible verses and attach Trump to not just Obama — that seemed to be a requirement for this project — but also the Clintons and other Democrats.

Nonetheless, I will not be voting for Donald Trump in the primary. I take my conservatism seriously, and I also take Saint Paul seriously. In setting out the qualifications for overseers, or bishops, Saint Paul admonished Timothy, “If anyone aspires to the office of overseer . . . he must not be a recent convert, or he may become puffed up with conceit and fall into the condemnation of the devil” (1 Timothy 3:1,6).

I think this is also true of political leaders, including those within the conservative movement. In October 2011, when many of the other Republican candidates were fighting Barack Obama, Donald Trump told Sean Hannity, “I was [Obama’s] biggest cheerleader.” Trump donated to both the Clinton Foundation and Hillary Clinton’s Senate campaign, as well to Nancy Pelosi, Harry Reid, Chuck Schumer, and other Democrats. In 2011, according to the website OpenSecrets.org, “the largest recipient [of Donald Trump’s political spending] has been the Democratic Senatorial Campaign Committee with $116,000.”

William F. Buckley Jr. proclaimed, in the founding statement of this journal, that conservatism “stands athwart history, yelling Stop, at a time when no one is inclined to do so, or to have much patience with those who so urge it.” Hasn’t Donald Trump always been a man inclined to go along—indeed, impatient to get along—with history?

In a letter to National Review, Leo Strauss wrote that “a conservative, I take it, is a man who despises vulgarity; but the argument which is concerned exclusively with calculations of success, and is based on blindness to the nobility of the effort, is vulgar.” Isn’t Donald Trump the very epitome of vulgarity?

In sum: Isn’t Trumpism a two-bit Caesarism of a kind that American conservatives have always disdained? Isn’t the task of conservatives today to stand athwart Trumpism, yelling Stop?

Sour-faced Fox News regular Cal Thomas got the last word — everyone was listed alphabetically — and made some really tight pop culture references that all the kids will surely get.

Everyone has a temperament. The dictionary defines it as “the combination of mental, physical, and emotional traits of a person.” Would Trump’s “combination” make him a good president? I think not.

I once compared Trump to Lonesome Rhodes, the character played by Andy Griffith in the 1957 film A Face in the Crowd. Trump might also be compared to Elmer Gantry, the fictional evangelist who used religion to mask his dark side.

Look, guys. You can’t put the milk back in the cow. You all courted this over the past seven-plus years by overreacting to the black guy in the White House. With each breathless, hyperbolic, over-the-top, race-baiting headline you fuckers tossed out, it only helped drive your largely white, angry, bigoted base into a frothing mess of misdirected pissed-offedness.

Trump was the guy they’d been looking for all along, mostly cuz y’all said that was the kind of leadership we needed.