Fox’s John Roberts Literally Does ¯\_(ツ)_/¯: ‘We’re Not Exactly Sure What’ Trump’s Talking About

Hours after President Trump seemingly backed down from his threat to close the southern border by giving Mexico a “one-year warning” to stop migrants and illegal drugs, Fox News chief White House correspondent John Roberts pantomimed a popular emoji to inform viewers that he wasn’t quite sure what the president was talking about Thursday.

Delivering a report on the president’s remarks during Your World with Neil Cavuto, Roberts told guest host Charles Payne that he would have to “do your favorite emoji” before acting out ¯\_(ツ)_/¯. 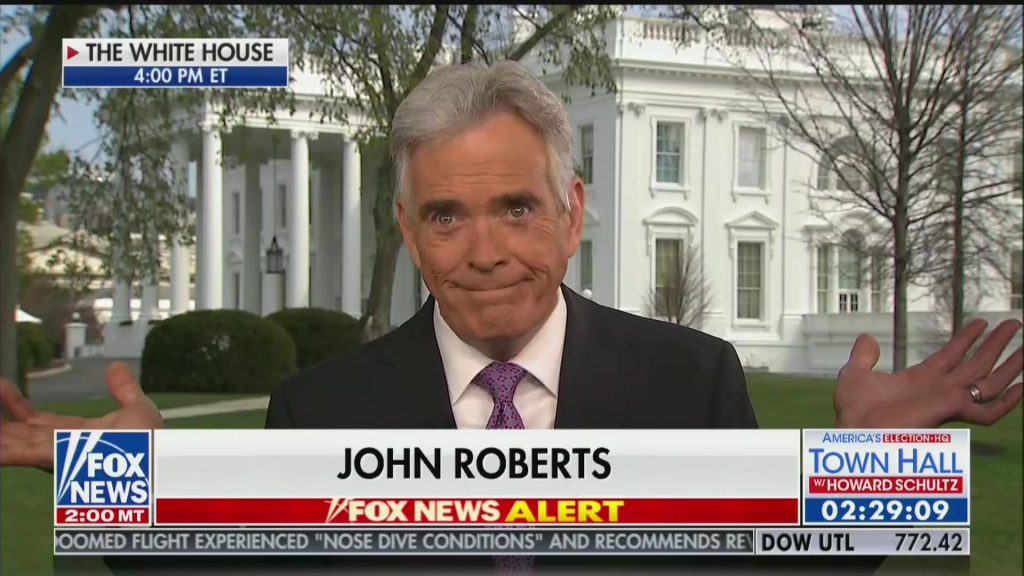 “Because we’re not exactly sure what the president is talking about,” Roberts said. “When he was in that pool spray earlier for that opportunity zone event, he appeared to say that he was giving Mexico a year to address the immigration problem and then over and above that the drug problem or he would impose tariffs on cars. If Mexico still didn’t get their act together, then he would close the border.”

After playing a clip of Trump’s remarks, Robert noted that he’d been told that the president may have meant that he was giving a warning for the car tariffs but that the border closure is still imminent. Roberts, meanwhile, explained that lawmakers immediately believed Trump was giving Mexico a year to fix those issues before threatening a border closure.

The Fox correspondent went on to point out that there’s a side deal in the USMCA that says the United States cannot impose tariffs on the first 2.6 million cars from Mexico or Canada, something the president indicated he would ignore and do anyway and “they’re going to have to live with it.”

“So the president is saying we’ve got the USMCA but I might want to impose tariffs on the cars despite the sideline that doesn’t allow me to do that,” Roberts told Payne. “We’re trying to sort this out. My apologies.”

“You may need your whole repertoire of emojis,” Payne responded.