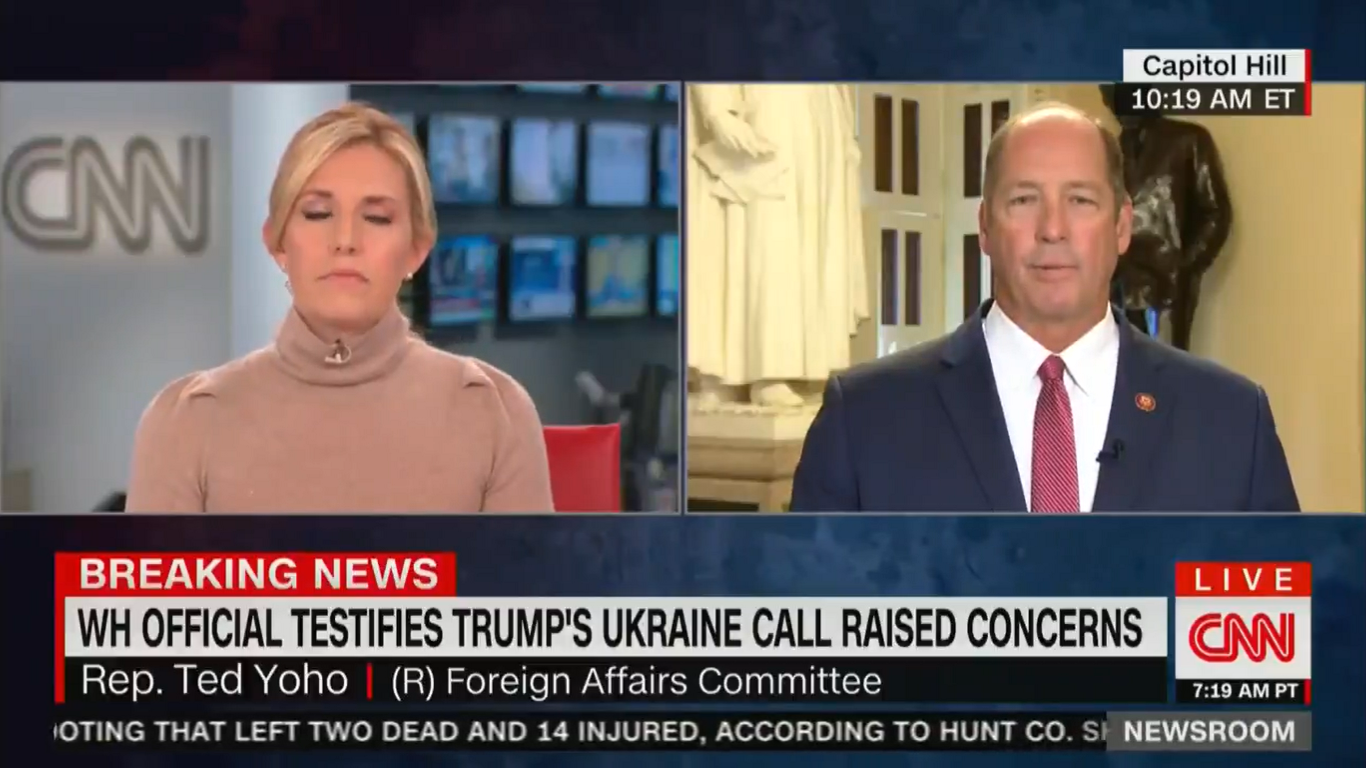 Republican Rep. Ted Yoho has the right to attend the ongoing impeachment inquiry into President Donald Trump but he hasn’t bothered to attend any of the hearings yet. The member of the Foreign Affairs Committee is one of 47 House Republicans who can attend the close door hearings.

Yoho told CNN’s Poppy Harlow on Tuesday that he hadn’t gone to any of the impeachment depositions yet but he did have questions from today’s witness, Lt. Colonel Alexander Vindman.

“I see these as kind of a sideshow,” Yoho said.

Here's @RepTedYoho (R) telling CNN he hasn't attended a single impeachment hearing despite having the ability to do so because "I see these as kind of a sideshow." pic.twitter.com/43aN9WCpnK

In the extended interview, Harlow asked Yoho if he had read the testimony from witnesses deposed in private. He said he had read summaries.

“And this will be the first one you attend in the inquiry?” Harlow asked, referring to Vindman’s testimony on Tuesday.

“It will be the first one, but we’ve been very engaged in what’s going on,” Yoho said.

“It’s a vote to OK the process that they’re going through and the transparency. And as long as we’re talking about transparency, these are held in an intelligence briefing SCIF, some of them, a lot of that information was leaked. and that goes against 2 USC §386 that members or staff members are allowing information to be released from an intelligence briefing, and that needs to be investigated, because they’re going and leaking stuff that they shouldn’t be leaking.”

“All members of the committees, so you’re one of them, are allowed to read the transcripts of these depositions, as they’ve been happening, have you done that?” Harlow asked.

“We’ve read the summary of Volker’s and there was one other one we did,” Yoho replied.

Some House Republicans stormed a SCIF and disrupted testimony from Pentagon official Fiona Hill last week in protest at close door proceedings many of them were permitted to attend. Yoho has the right to hear the closed door testimony but has apparently chosen not to.

You can watch part of the interview above, via CNN/Twitter.