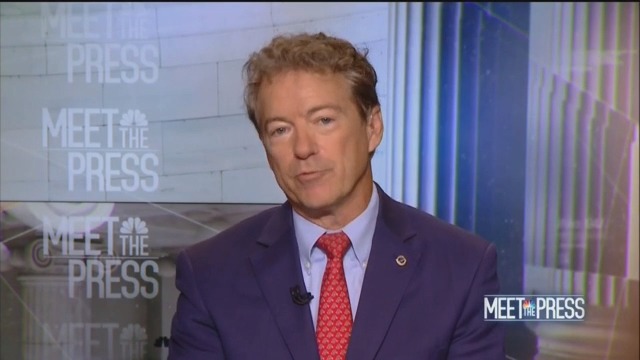 During an appearance on NBC’s Meet the Press, Sen. Rand Paul (R-KY) defended President Trump’s decision to withdraw U.S. troops from northern Syria and give the OK to Turkey to invade the region and attack America’s Kurdish allies. At the same time, Paul did suggest Trump was being hypocritical by claiming he’s for “ending the endless wars” while simultaneously providing Saudi Arabia 1800 American troops as essentially a mercenary force.

CHUCK TODD (MEET THE PRESS ANCHOR): The president quietly sent more troops to Saudi Arabia and claims the Saudis are going to pay for those troops. Are you comfortable with the U.S. military being treated almost like a mercenary force for the Saudis?

PAUL: I’m not. In fact, I would withhold troops from Saudis. I think our arms belong uniquely to the American people and we shouldn’t be sending them to the Saudis until we see a change in their behavior. It’s inconsistent to say we’re for not having endless senseless wars and have them in Saudi Arabia.

One thing that bin Laden motivated him, one of the things he said that motivated him were troops in what they considered to be their holy land. I think having troops in Saudi Arabia becomes a magnet for all the crazy jihadists around the world to motivate them to attack again.

Watch the clip above, via NBC News.