Over the weekend, Florida senator and salesman who wants to know what he can do to get you into that new car today Marco Rubio made a bit of an oopsie on his Twitter account.

Rubio, in a now-deleted tweet, said that an explosion at the German Dam in Venezuela had caused widespread blackouts in the struggling country: 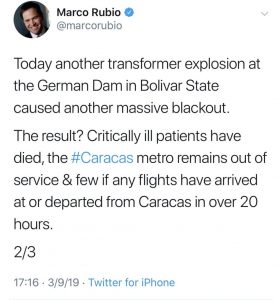 There was one problem, as noted in this tweet from a reporter named (squints at notes) German Dam:

Senator @marcorubio, an important transformer exploded in Bolívar and that, in part, again collapsed the Venezuelan Electric System; however it was not in a dam, much less german.
My name is Germán Dam, I am one of the journalists who published the information.
😎🤘😊 https://t.co/DicWDJzlfQ

Monday morning, Rubio deleted the tweet and gave a near-Trumpian excuse for his mistake:

I meant to type “Today another transformer explosion in Bolivar State caused another massive blackout according to German Dam.” It was a thread & I usually go back & add the twitter handle before tweeting. This one I pressed “tweet all” before I checked.

Sure, and the president purposely said “Tim Apple” to save time.

Rubio has been using his Twitter account for weeks to highlight the breakdowns of civil society in Venezuela and beat the drum for the nation’s president, Nicolás Maduro, to step down from power. He has also called for U.S. intervention to push Maduro out if he will not go voluntarily. Rubio has not been subtle about what he would like to see the U.S. do, going so far as to post an image from a recording of the extrajudicial murder of former Libyan leader Muammar Gaddafi to make his point.

In this case, it looks as if he was so anxious to pin something else on the Maduro regime that he mixed up a journalist with a civil engineering project, then tried to say he had typed “at German Dam” instead of “@German Dam.” Sure, whatever.