Hey, remember that time Donald Trump’s attorney went on national TV and said there was no such thing as marital rape? Well, to no one’s surprise, it appears that that feeling is held by others within the Republican Party.

Earlier this week, the Quorum Report, a Texas political blog, was provided information related to Texas State Rep. Jonathan Stickland (R) and his online activities from some years ago. Per the posts obtained by Stickland’s primary opponent, Pastor Scott Fisher, the GOP lawmaker apparently believes that it is impossible to rape one’s wife. 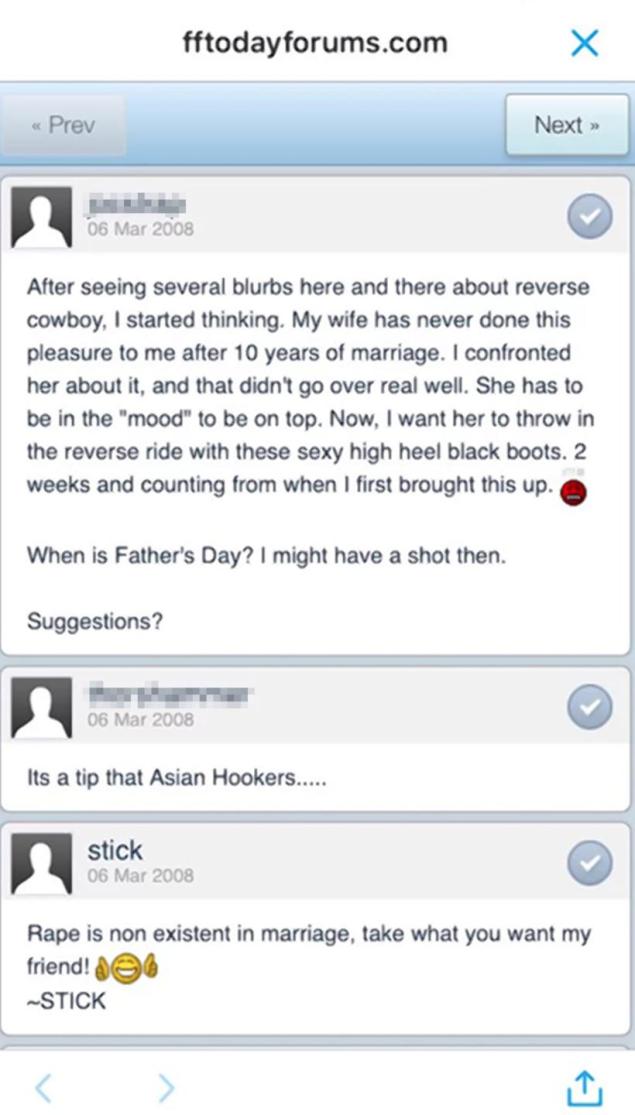 Yep, as seen above, Stickland posted in a fantasy football forum that “rape is non existent in marriage” and the person he was responding to should take whatever he wanted from his wife, which appeared to be getting her to do “reverse cowboy” (dude, at least get the terminology correct).

Fisher, in his online investigations, also discovered that Stickland liked the sticky icky. In various forums and message boards, the self-proclaimed “Christian Conservative Liberty Loving Republican” was out searching for smoke buddies or trying to find ways to start his own weed plantation. Despite claiming he stopped smoking marijuana in 2006, Fisher found posts of Stickland’s discussing smoking pot “2-3 times a year” in 2008 and obtaining a detox drink to pass a drug test.

Per the Quorum Report, Stickland has acknowledged the posts are his and that he has made mistakes in his life. Of course, God has forgiven him due to his grace, so all’s good. He also pointed out that he’s just like Jeb Bush and Ted Cruz in terms of smoking the devil’s lettuce back in the day.