Perhaps related to an Iowa poll showing Texas Senator Ted Cruz pulling ahead of him in Iowa, perhaps not, Republican Presidential candidate and Benito Mussolini impersonator Donald Trump released a statement on Monday that pushed his xenophobic fascism to a new frontier. Catering to his mouth-breathing, gun-clinging, racist, uneducated white base, Trump called for a complete ban on all immigrants who are Muslim.

Following up on his statement, Trump’s campaign manager clarified that the GOP frontrunner is not just talking about immigration, but also wants to prevent any Muslims seeking to enter the country as tourists or on temporary visas.

Below is the statement that was released to the press: 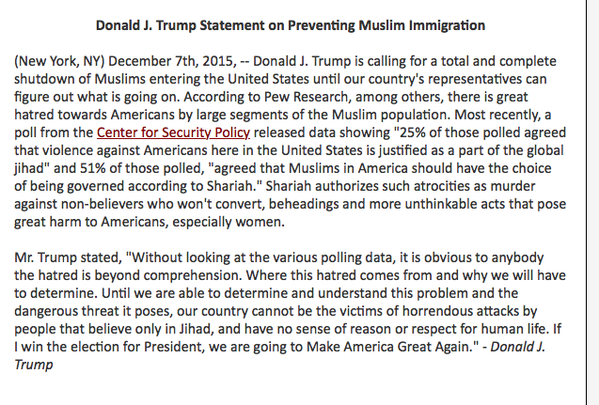 Trump’s statement comes on the heels of Republicans complaining about President Obama’s Oval Office speech Sunday night. According to GOP White House hopeful Marco Rubio, Obama was being cynical for mentioning discrimination that Muslims have dealt with in the wake of terrorist attacks, claiming that they don’t suffer any real discrimination. Meanwhile, Fox News’ Charles Krauthammer stated that the treatment of Muslims since 9/11 has been “unbelievably respectful and restrained.”

Um, how is that looking now? I’d say the favorite for the Republican nominee calling on a complete ban of Muslims entering the country sure sounds like discrimination. It also sounds like someone deliberately playing on racist fears in order to maintain his lead in the polls, knowing that anger, hatred and bigotry sell.