Fox News’ Greta Van Susteren: America Has Too Many Guns So No Point Changing Any Laws 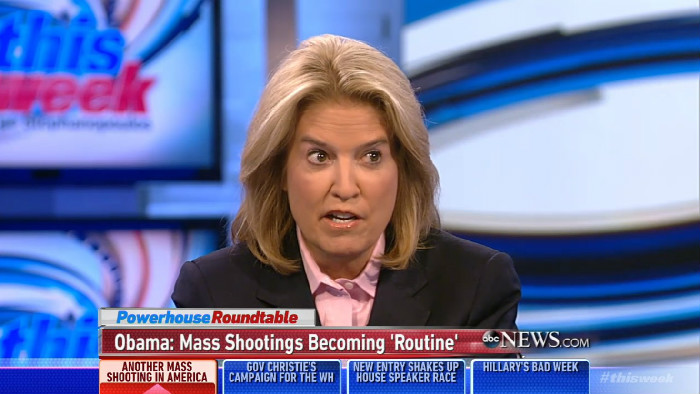 One of the leading arguments you hear from ‘thoughtful’ conservatives on the issue of gun control is that any laws enacted curbing firearm purchases or regulating ammunition would be futile due to the number of guns already in the country. This pretty much goes hand in hand with the thought that while climate change might be real and attributable to human activity, it is pointless to do anything now because we’ve reached the point of now return and new regulations would be too harmful to the economy.

Reacting to the Oregon shooting that led to nine deaths on Thursday, Fox News host Greta Van Susteren stated that there are already so many guns in the United States that any laws passed promoting gun control will be useless. (This is an argument I addressed on Thursday immediately after the shooting took place.) Appearing as a panelist on Sunday’s broadcast of ABC’s This Week, she also stated that “anti-gun” people are just using this latest tragedy to fundraise.

From the transcript of the show:

GEORGE STEPHANOPOULOS: That’s President Obama speaking out for the 15th time, 15 mass shootings on his watch.

And Greta, let me begin with you. You saw the president so angry, so frustrated on Thursday. He said this is a political choice that we make to allow this to happen every few months in America.

Look, everyone is on the same page on this…

STEPHANOPOULOS: Everyone is on the same page?

VAN SUSTEREN: No, no. To the sense every single person wants this to stop, this violence. Every single person. And so some call for gun control. And I think that’s in some ways unrealistic. When I practiced law in the District of Columbia, very strict gun laws. And every single one of my clients could get a gun. The guns are out there. They are all over. And you can create all the laws you want, but all the guns are out there. They’re going to be coming in through black markets. And so we’re not being very realistic that all of a sudden putting — changing the laws is going to change anything.

The guns are there. If you really want to regulate you’ve got to be a little bit smarter, maybe regulate ammunition so that people can’t use their guns. That’s the smart thing.

But I think we’re being a little bit unrealistic about this. There — and part of the problem is that the politicians on both sides of the aisle — due respect, sir, both you gentlemen — is that they take sides. They’re not looking for solutions. Everyone wants to fund-raise off this. The anti-gun people want to fund-raise and the pro-gun want to fund raise.

After Greta pointed out that we shouldn’t do shit because, you know, fuck it, Cole then tossed out the right-winger’s favorite new meme when it comes to mass shootings — mental health! This led to Ellison agreeing with Stephanopoulos that there are crazy people all over the world, but it seems like only America has an issue with these types of killings. The Minnesota Democrat then noted that we can still pass some laws that would have some effect on gun violence. He also pointed out that Republicans should stop standing in the way of the CDC collecting data on gun deaths.

Of course, Van Susteren stood by her argument that it is all fucking useless and we shouldn’t even try anything. Because, you know, we’ve fucked shit up so bad that we just might as well live with the aftermath and stand around with our dicks in our hands. After Bai got involved and tried to interject some logic into the discussion, Van Susteren brought up another favorite conservative red herring — violent video games! Because as we all know, only Americans play these games and nobody else around the world can access them.

Anyway, if you want to see a Fox News host go all Fox on an issue, below is video of the show, courtesy of ABC News: