On a day where there was news that varied from the finding of flight MH370 wreckage to ongoing Cecil the lion drama to the unfolding details of the Sam Dubose murder case, Fox News decided to make their top story about a fictional comic book character. For a brief time Friday afternoon, the headlining story on the network’s website revolved around the latest Superman comic, which features a storyline where Superman punched a police officer. The plot is an obvious reference to recent #BlackLivesMatter protests in Ferguson, Baltimore and New York, and apparently that doesn’t sit too well with Fox and its target audience.

It would be one thing to just reference the plot as part of a piece on the latest issue of the iconic comic series, but this is Fox, and you know they had to get all apoplectic about the radicalization of one of our country’s true heroic symbols. When the story was featured at the top of the website, Fox gave it a blaring title — ‘SUPER INSULT’.

Below is a screengrab from the site Friday afternoon: 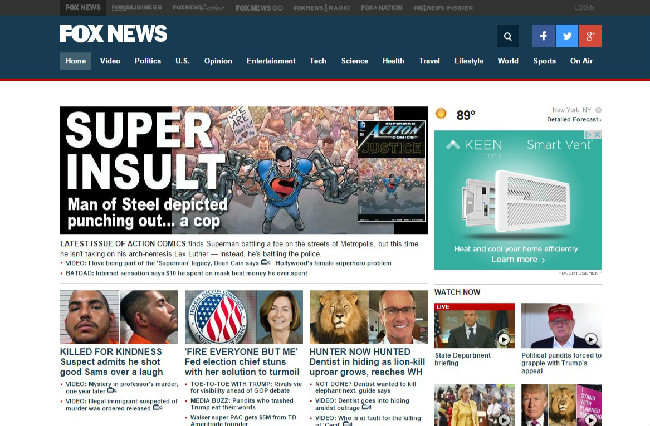 The article itself is pretty straightforward, although it does try to make the comic storyline seem to be extremely controversial and insulting to police officers. As one would expect, the writer made sure to interview a police representative for law enforcement’s hot take on the issue. Of course, police are totally pissed off about it and just want Superman to go back to fighting the bad guys, not the good guys.

“They want to sell comics,” he said. “Unfortunately it’s at the expense of some very great cops out there every day protecting the public.”

Still, seeing a police officer portrayed as a villain didn’t come as a shock to Colligan.

“We are once again painted with the very broad stroke nobody wants to be painted with,” he said.

“Comic books are taking on social issues lately and maybe they should get back to taking on superheroes and making people laugh,” he said.

Man, that is some shiny ass shit right there. Also, you have to love how the cop says that comic books should only focus on shallow entertainment and not even touch social issues. My guess is if the Superman writers showed the Man of Steel cracking protesters’ heads and standing side by side with the thin blue line, Colligan would be hyping this up anywhere and everywhere. So spare me the victimization bullshit.

Anyway, despite their best attempts to make this a trending news story, nobody really seemed to care Friday. Sure, some right-wing publications like WND picked it up, and some conservatives tweeted about it, but it didn’t cause the kind of outrage that Fox was hoping it would. I guess Roger Ailes will just need to move on to something else to raise the hackles of white conservatives this weekend.